Get Discounts On A Christmas Carol Old Vic London Tickets!

After debuting in 2017, Matthew Warchus’ blockbuster production of A Christmas Carol is making its much-awaited return to the London stage at the Old Vic Theatre. The Charles Dickens classic is scheduled to begin previews from 24th November. Unlike other productions of A Christmas Carol, this one doesn’t shy away from the grandeur of the story, in fact, it doubles down on those aspects.

The auditorium is packed to the brim with mince pies, music, and joyous celebration, making it the perfect accompaniment to the festive season. This production also features a unique staging which keeps the audiences engaged and involved in the proceedings on the stage. The script for the 2018 production of A Christmas Carol has been written by Jack Thorne, who is coming off strong after a flurry of Olivier Awards for his work in the acclaimed West End production of Harry Potter and the Cursed Child.

If you’re familiar with A Christmas Carol, you would know just how appropriate it is for the Christmas season. A perfect watch with the family, this production of the Charles Dickens classic is as magical as it’s touching and will definitely lift your holiday spirits. The show is scheduled to begin previews at The Old Vic Theatre starting from 27th November 2018 with opening night set for 5th December. A Christmas Carol at the Old Vic is playing a limited engagement, scheduled to play until only 19th January 2019.

Charles Dickens’ iconic tale of miser Ebenezer Scrooge and the spirits of Christmas past, present and future is known to one and all. While there have been many equally unique adaptations of this fabled story, there’s nothing quite like the charm of recreating the magic of the original. The story begins as Ebenezer Scrooge, a rich, old, and bitter businessman, wanders the streets. He torments his employees by making them work on Christmas, doesn’t give anyone gifts for the holiday season, and utters his, now famous, phrase ‘Bah Humbug!’ at everything that annoys him, which is basically everything.

There’s no changing a man like Scrooge and it would seem like only a miracle could change his attitude and outlook towards life. But this is Christmas time, and there’s no dearth of miracles. The night before Christmas, Scrooge is visited by three ghosts who take him on a wild journey in an attempt to show him just how wrong he was. Will Scrooge come to realize the error of his ways or go back to being the old miser he always was? 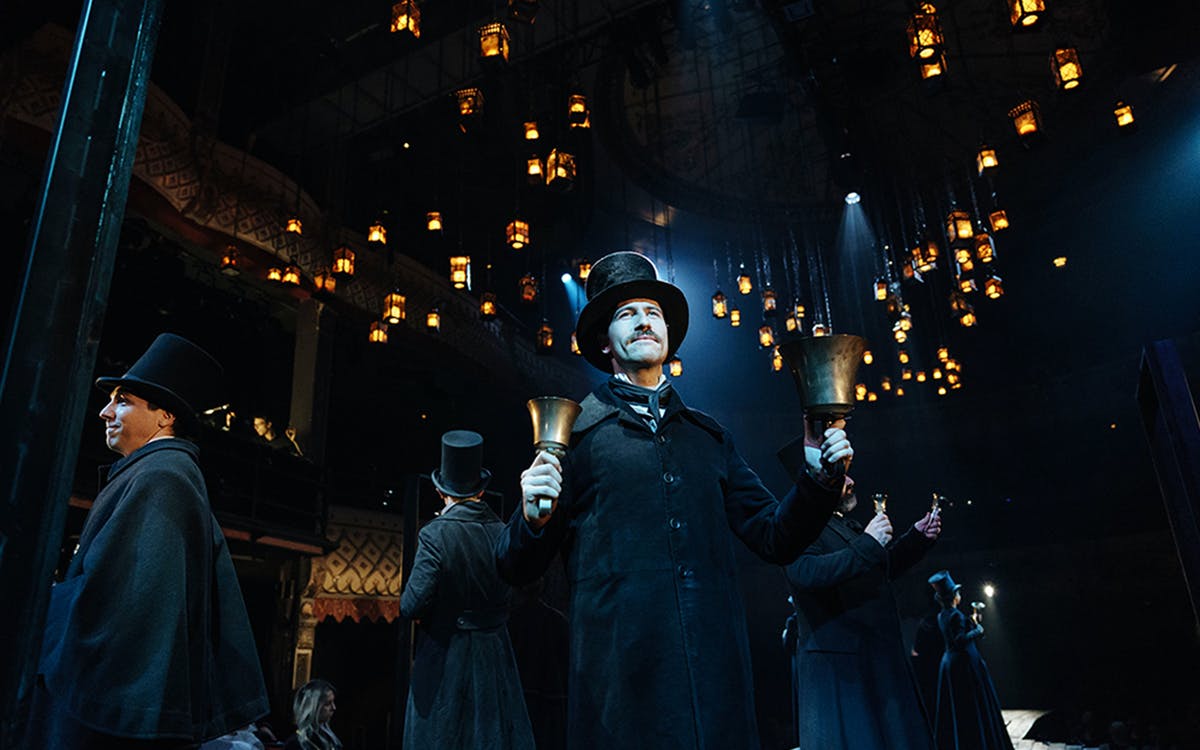 Use promo code WE10 and save £10 on A Christmas Carol Old Vic London tickets.

Duration
2 hours and 5 minutes, including 1 interval

Adapted for the Stage by
Jack Thorne

Based on
A Christmas Carol by Charles Dickens

Audience
Suitable for ages 8 and above.

Seating
The Old Vic Theatre has a seating capacity of 1,067.

Looking out for discount on A Christmas Carol Old Vic London tickets !

Have a look at the real-time seat availability and prices of different sections for A Christmas Carol Old Vic London. In the interactive seat-map, select the date that you would like to watch the show and check out the seats available for that day. You can filter the seats as per your desired price range and purchase tickets directly.

Use promo code WE10 and save £10 on A Christmas Carol Old Vic London tickets.

“Matthew Warchus’s magnificent staging provides everything you might want from a theatrical adaptation of Dickens’s timeless (and never more timely) morality tale urging social responsibility and compassion.”
– The Independent

“Jack Thorne, the playwright with the magic touch, re-works A Christmas Carol for an absorbing and atmospheric new show.”
– Culture Whisper

Apart from getting tickets for A Christmas Carol Old Vic online, there are other ways to obtain West End tickets for cheap, such as:

Check back for more information once the show premieres.

Day Seats are discounted tickets that are available for purchase, and are to be used, on the same day at the theatre. Please note that the availability of tickets is based on the discretion of the Old Vic Theatre Box Office, and may not be available for all shows.

Day Seats at Old Vic Theatre are currently unavailable for purchase. Check back once the show opens.

Q: What time should I arrive at Old Vic Theatre?
A: Doors open 45 minutes before show time. We recommend arriving at least 30 minutes before curtain.

Q: Is there a possibility that I will get partial view seating if I purchase discounted A Christmas Carol Old Vic London tickets?
A: When booking with Headout, you will get to select your specific seats, thus, ensuring you do not get stuck with partial view. However, if you opt to try and win lottery tickets, or purchase day seats, your seats will be allocated at the discretion of the Box Office, which can potentially mean partial view seating or split seats.

Located south-east of Waterloo Station in Lambeth, London, The Old Vic is a 1,000-seat theatre that hosts a variety of plays and musicals. The not-for-profit theatre was established in 1818 and named the Royal Coburg Theatre. Later in 1871, the theatre underwent major reconstruction and reopened as the Royal Victoria Palace.

The Old Vic Theatre is the meeting point of quite a few theatres and performing arts companies in London. In 2003, famous actor Kevin Spacey was named the artistic director of the theatre and in 2015, he was replaced by Matthew Warchus, who is also the creative mind behind the acclaimed production of A Christmas Carol.