All Alhambra : Skip the Line Premium Tour with Nasrid Palaces

4.7
1084 Ratings
Show tickets on your phone
Upto 5% Cashback
3 hrs
Best Safety Standards
This experience has been verified to follow best safety standards in compliance with local regulations and WHO
Safety Details

Enjoy a delightful tour with a group of 10 or less for an intimate and unforgettable experience. Benefit from seamless fast-track access to the Palace of the Alhambra, the Alcazaba and the historic Generalife in the company of a professional guide. Admire the incredible architecture of the Palace and the Generalife and walk through the lush greenery of the Generalife gardens.

After assembling at the meeting point, your professional guide shall lead you past the winding queues and on to an adventure of a lifetime! Walk through the passages and admire the different styles of architecture that were used as the Palace expanded. Your guide will regale you with tales about the Palace's history and provenance as you make your way through. Marvel at the Gate of the Pomegranates and gaze at the Washington Irving Monument, an odd sight until you'll learn that he was the first Hispanist, inspiring the travels of many 19th century Americans when he wrote Tales of the Alhambra while living in the Palace. You will also get to visit the Palace of Charles V, built by the Holy Roman Emperor in Alhambra for the poignant significance of being a Muslim fortress that was conquered by his own Christian grandparents. The many pillared palace is a sight to behold, regardless of its origins. Don't forget to visit the unique Court of the Lions, a well-known highlight of the Nasrid Palace.

Take a Stroll in the Impeccably Manicured Generalife Gardens

The Generalife is also known as the Architect's Garden, is easily one of the oldest examples of Moorish gardens. In fact, the entire estate is a series of gardens and fountains with exceptional Islamic motifs and architecture tying it all together. Cool turquoise water, flower beds, and lush greenery make the Generalife a beautiful sight. You will also get to spend some time in the Dehesa of Generalife, a vast green expanse offering incredible scenic views of the surroundings.

This tour runs in English, French, German and Spanish.

Warning: Ensure that you are carrying a valid ID of the members in your group if you select any reduced price tickets during checkout.

Unfortunately, this tour is not wheelchair accessible. Baby strollers are prohibited at the Palace.

- By Bus: Board the C4 bus and get off at the Alixares Generalife stop.
- You will reach the meeting point after a 2-minute walk. 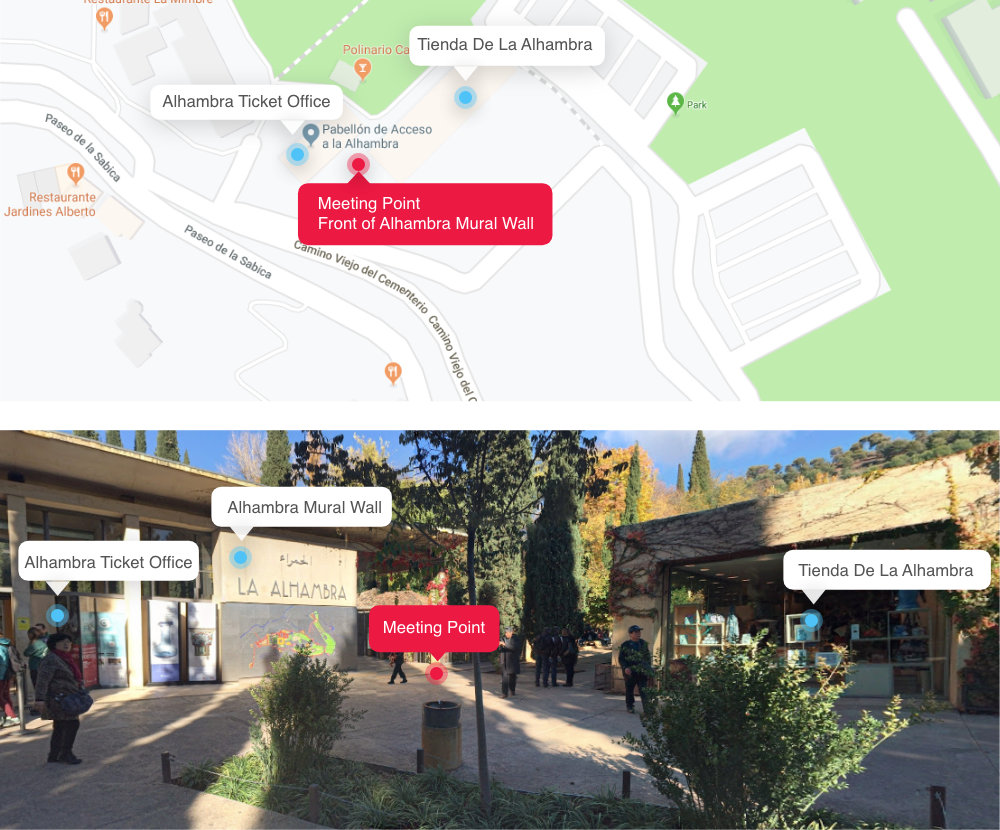 - Late arrivals and people who miss their tour will be considered a no-show and will not be eligible for a refund.
- The tour reservations have strict timing. If you arrive late, it will not be possible to join the group or reschedule, unless you pay for the activity again.(subject to availability)

Upto 5% Cashback
from
$69.55
Book Now
Best price guaranteed
Why Headout?
Trusted platform used by 100K+ people, each month
Get the lowest prices and last minute availability
Discover and connect with 10,000+ experiences
Browse verified reviews and professional photographs
Have a question? Live chat with our experts 24/7

Other experiences similar to All Alhambra : Skip the Line Premium Tour with Nasrid Palaces

Best Safety
Alhambra Tickets
All Alhambra: Skip the Line Guided Tour With Nasrid palaces
upto 29% off
4.6
1517 Ratings
from
$45.98
We've served 5 million+ guests and we are here for you
5 million +Happy customers across 10,000+ experiences
4.4/5
5,000+ verified reviews with 90% excellent score
In the mediaFeatured and recommended by the best brands
24 x 7 help CenterHave a question? Live chat with local experts anywhere, anytime