Learn about the life of Gaudi and his famous artworks as you travel to Passeig de Gràcia avenue, an avenue housing two of his most famous works, Casa Batlló and La Pedrera. Finally, enjoy skip-the-line access to the Sagrada Familia, Gaudi’s ultimate masterpiece!

Antoni Gaudi is regarded as a visionary architect during Barcelona’s modernista period in the early 1900s. Most of Barcelona’s stunning buildings were designed by Gaudi, and 7 of these buildings are listed as World Heritage Sites by UNESCO. Open your eyes, heart, and soul to Gaudi’s work, and try to understand his use of nature as a source of inspiration. But Gaudi was more than just artistic genius; most of his work that appears to be chaotic is based on sophisticated mathematics.

Start At The Passeig de Gràcia

After boarding your air-conditioned, luxury coaches, relax and take in your surroundings as you drive along the Passeig de Gràcia, an elegant avenue built by wealthy Barcelonians. The architectural details really stand out at this avenue, including modernist lamp posts and Gaudi’s remarkable tiles for the pavement.

Check out Casa Batlló, considered Gaudi’s artistic legend. From the grand façade that mirrors a peaceful sea, to the bloody battle between the dragon and Saint George, Casa Batlló is sure to impress. Yet another artistic marvel by Gaudi at The Passeig de Gràcia is La Pedrera. This majestic façade with its remarkable balconies and odd-looking chimneys will definitely grab your attention.

The Sagrada Familia In All It’s Glory

Considered the jewel in the crown of Gaudi’s work, the Sagrada Familia is a culmination of his conception of architecture. Gaudi wished for this temple (which is still being built) to be financed by the people, and not by taxes or funding. The entrance fee for each ticket goes towards financing the completion of this building, which started in the year of 1882.

Be sure to check out the outside of the Sagrada Familia, where each façade replicates a chapter of Jesus’ life. The basilica is absolutely breathtaking, with curved columns that look like trees, and light that plays across the hall with a constant change of colors.

At the end of the tour, you are free to stay back for as long as you want until the closing time of Sagrada Familia. During this time, don’t forget to step into the museum, the studio workshop that helps you better understand Gaudi’s thought process and work.

Please note that this tour involves a fair amount of walking. Wearing comfortable shoes is recommended.

Children’s tickets (aged 3-12) can be bought at a discounted price.

Get Directions to the Boarding Point

-By Metro
The nearest metro station is Catalunya, which is the 3-minute walk from the meeting point. Metros that go here are L1 and L3. 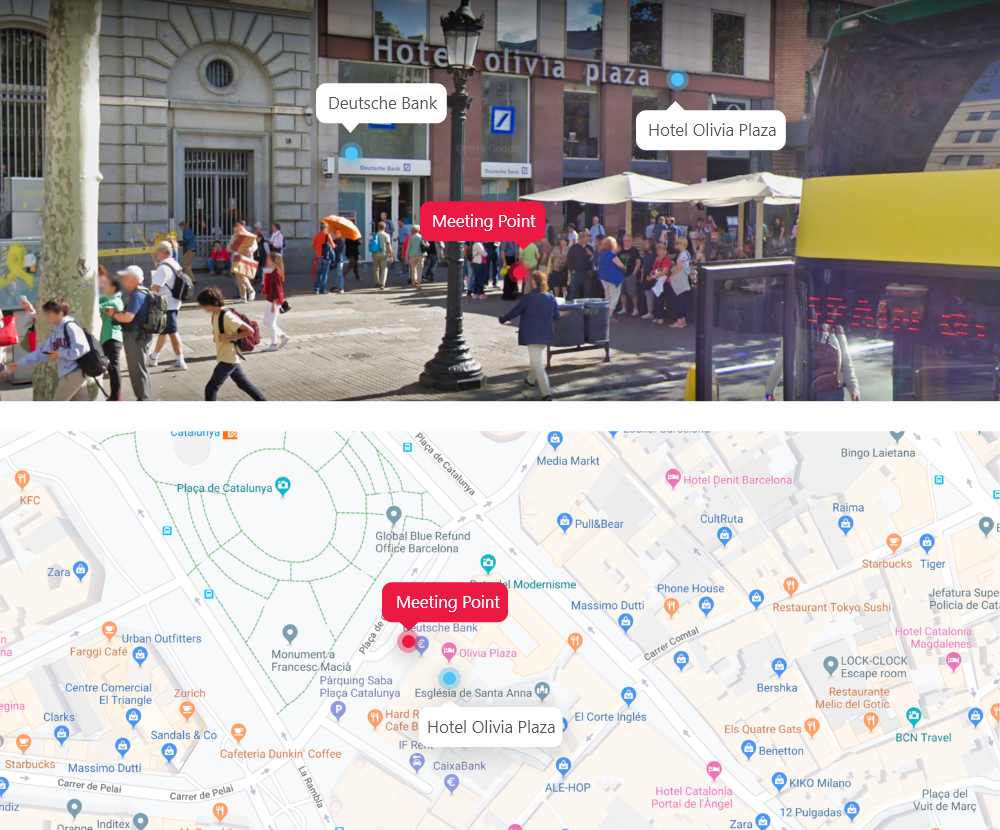 Missing any information?
Yes
No
This experience is unavailable
You'll be the first to know when these tickets are back online.
notify me
Awesome!We will notify you.
Why Headout?
Trusted platform used by 100K+ people, each month
Get the lowest prices and last minute availability
Discover and connect with 10,000+ experiences
Browse verified reviews and professional photographs
Have a question? Live chat with our experts 24/7
Other experiences similar to Skip the Line Sagrada Familia Guided Tour with Transportation
Theme Parks
Park Güell Timed Entry Tickets
4.2
(11.6K)
€10
Guided Tours
Park Güell Guided Tour with Skip-the-Line Access
Instant Confirmation
4.4
(2.4K)
from €23
Free Cancellation
Landmarks
La Pedrera - Casa Mila: Skip the Line Ticket + Audioguide
4.3
(2.5K)
€25
Landmarks
FC Barcelona: Camp Nou Stadium & Museum Tour
4.5
(2.2K)
€28
Zoos & Aquarium
Barcelona Zoo Tickets
Instant Confirmation
4.2
(1.9K)
€21.40
The world on your tap!Get the Headout app to get tickets on your phone and access app-only deals. Talk about win-win.
We've served 10 million+ guests and we are here for you
10 million +Happy customers across 10,000+ experiences
4.4/55,000+ verified reviews with 90% excellent score
In the MediaFeatured and recommended by the best brands
24 x 7 Help CenterHave a question? Live chat with local experts anywhere, anytime