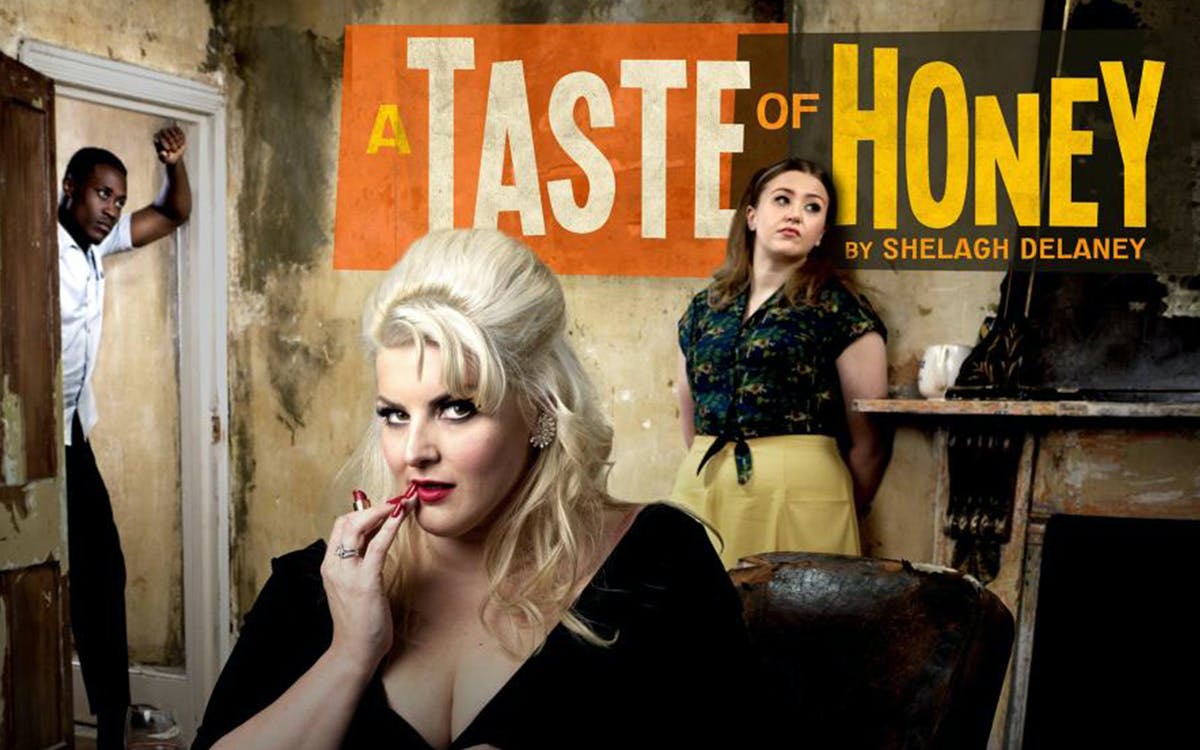 A Taste of Honey - Tickets

why watch a taste of honey

A Taste of Honey, adapted from Shelagh Delaney's first Britsh classic, presents a realistic, and often uncomfortably so portrayal of life for the common folks in post-war Britain. Depicting this reality from the perspective of its two female leads, A Taste of Honey is groundbreaking for its euphoric portrayal of the female spirit - glory, strength, vulnerabilities et al. The show is directed by Bijan Sheibahi of Barber Shop Chronicles fame and Hildegard Bechtler is the set designer. Upon debuting in West End on 27th May 1958, the play set the ground for the revolutionary “kitchen sink” realism that marked a new era of British theater.

Set in Salford, North West England in the 1950s, A Taste of Honey is the story of a 17-year old working-class girl Jo and her mother Helen. Helen is best described as crude and sexually promiscuous and the story picks up when she leaves her daughter alone at their home to pursue a relationship with Peter, a much younger rich lover. Resilient and feisty, Jo soon begins a relationship of her own with Jimmy, a black sailor. Jimmy promises to marry Jo but heads for the sea instead, leaving her pregnant and alone. During these troubling times, Jo finds support with Geoffrey, a gay acquaintance who taken on the role of a surrogate father. What happens when Helen returns? Does Jimmy return to take responsibility for his child? Watch A Taste of Honey to find out.

Audience
The play is recommended for ages 13 and up

Seating
Trafalgar Studios has a seating capacity of 380

Dress Code
Smart and casual wear is recommended. Carry a few layers; the theatre is air-conditioned through the year and can get a bit chilly

You will get an email confirmation with your ‘A Taste of Honey’ voucher. Please display the same on your mobile phone with a valid photo ID.

Missing any information?
Yes
No
This experience is unavailable
You'll be the first to know when these tickets are back online.
notify me
Awesome!We will notify you.
Why Headout?
Trusted platform used by 100K+ people, each month
Get the lowest prices and last minute availability
Discover and connect with 10,000+ experiences
Browse verified reviews and professional photographs
Have a question? Live chat with our experts 24/7
Other experiences similar to A Taste of Honey
Musicals
The Lion King
Instant Confirmation
4.5
(2.3K)
from £42
Musicals
Wicked
Instant Confirmation
4.5
(2K)
from £23.40
Musicals
Mamma Mia!
Instant Confirmation
4.5
(2K)
from £18
Musicals
Phantom of the Opera
Instant Confirmation
4.5
(1.3K)
from £27
Musicals
Matilda The Musical
Instant Confirmation
4.5
(1.6K)
from £24
The world on your tap!Get the Headout app to get tickets on your phone and access app-only deals. Talk about win-win.
We've served 15 million+ guests and we are here for you
15 million +Happy customers across 10,000+ experiences
4.4/55,000+ verified reviews with 90% excellent score
In the MediaFeatured and recommended by the best brands
24 x 7 Help CenterHave a question? Live chat with local experts anywhere, anytime
Headout is building the future of how we experience our cities.
Made with ❤️ all over the 🌎
Headout Inc.
82 Nassau St #60351 New York, NY 10038
Cities
New YorkLas VegasRomeParisLondonDubaiBarcelona+74 more
Headout
About UsHelpCareersTravel BlogCompany BlogCreator Partnerships
Partners
Join HeadoutSupply Partner HubAffiliates
© Headout Inc
Privacy PolicyTerms of Usage