Get Discounts On Waitress The Musical London Tickets

About The Theatre
Seating Plan
Waitress

One of Broadway’s best-selling musicals is making its way across the pond and debuting at The Adelphi Theater in February 2019! ‘Waitress’, based on a movie of the same name, tells the story of Jenna Hunterson, a waitress with lofty aspirations, stuck in a loveless marriage with her abusive husband Earl. With music and lyrics by 6-time Grammy nominee Sara Bareilles and direction by Tony Award winner Diane Paulus, this is a production you definitely do not want to miss. Waitress Discount Tickets are just a few clicks away!

This guide will help you get all the important information about ‘Waitress’ London and will also help you find tickets at the best price for the West End edition of the musical.

Waitress is a light-hearted, feel-good musical that briefly yet delightfully touches upon the themes of friendship, motherhood and self-liberation in the face of limited choices. Based on a 2007 indie film starring Keri Russell, the musical adaptation of this hit debuted on Broadway in March 2016 and was an instant success. With a bright, bubbly and infectious score by pop superstar, Sara Bareilles, you are bound to shake your feet and clap your hands as you are taken on a wonderful, musical journey in this ever-popular production.

Also, here’s a handy link to the seat availability and real time prices for different seats/dates for Waitress West End on Headout.

Waitress is a heartfelt story of a young woman, Jenna Hunterson, who works as a waitress but has dreams of opening up her own pie-shop. Trapped in a cold, loveless marriage with her abusive husband Earl, and stuck in a small town, Jenna has all but given up hope. And to make matters worse, she finds herself facing an unexpected pregnancy and fears that she now has no choice but to abandon her pie-making dreams. But just when Jenna is down in the dumps and completely distraught with life, she finds out about a baking contest in a nearby county and believes that this could be her one true chance to break free.

The entire story, complete with all the characters - her fellow waitresses, customers and the handsome new doctor in town, the irresistible score and sharp directorial skills blend well together to create a perfect recipe for happiness. 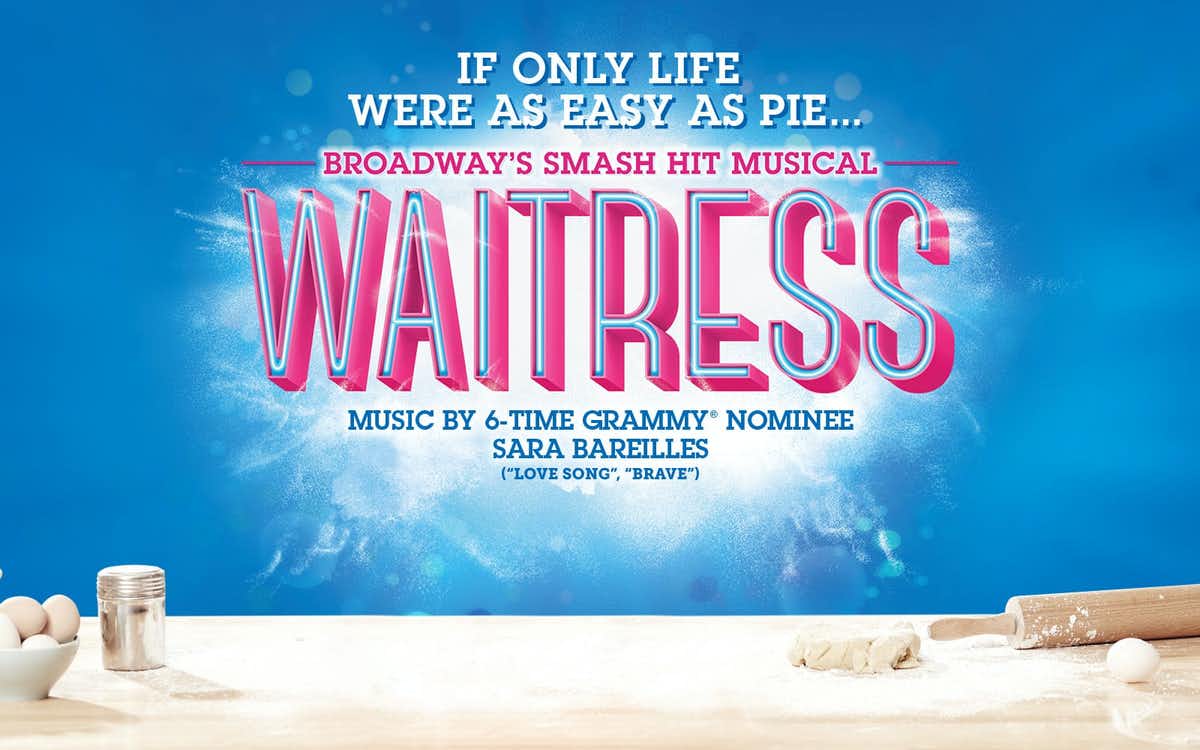 Use promo code WE10 and save £10 on Waitress West End tickets.

Since its inception, this musical has been a runaway success, selling out completely on most nights. With best-selling artist Sara Bareilles and Tony-Award winning Diane Paulus involved in the production of this musical, ‘Waitress’ has garnered wide praise from both audiences and critics alike!

The production on Broadway has been nominated for various awards including the prestigious Tony Award for ‘Best Musical’ and Outer Critics Circle Award for ‘Outstanding New Broadway Musical’. Although the production is yet to showcase on West End, going by its performance and reception on Broadway, you can be sure that the West End adaptation is bound to be astound viewers.

"'Sugar'," 'butter' and 'flour' are the first words we hear in the new Broadway musical Waitress (* * * ½ out of four) - simple ingredients that can produce scrumptious, and healing, results. That's certainly the case with this delightful adaptation of Adrienne Shelly's 2007 film, which followed a small-town gal trapped in an unhappy marriage but blessed with a prodigious talent for making pies. Arriving in a season that has brought Hamilton and now the majestically unsettling American Psycho, the new musical may initially strike you as - pardon the inescapable food metaphors - a modest confection."
– USA TODAY

“An empowering musical of the highest order”
– Chicago Tribune

Looking out for discount on Waitresss tickets !

Have a look at the real-time seat availability and prices of different sections for Waitress London Musical. In the interactive seat-map, select the date that you would like to watch the show and check out the seats available for that day. You can filter the seats as per your desired price range and purchase tickets directly.

Use promo code WE10 and save £10 on Waitress London Musical tickets.

Leading Roles
Yet to be announced.

Seating
The Adelphi Theatre has a seating capacity of 1,500.

Apart from getting tickets for Waitress online, there are other ways to obtain West End tickets for cheap, such as:

Day Seats at Adelphi Theatre are currently unavailable for purchase. They will be made available once the show opens.

Q: Is there an age limit for the Waitress London show?
A: The show is suitable for those of ages 10 and up.

Q: Is there a possibility that I will get partial view seating if I purchase discounted Waitress West End tickets?
A: When booking with Headout, you will get to select your specific seats, thus, ensuring you do not get stuck with partial view. However, if you opt to try and win lottery tickets, or purchase day seats, your seats will be allocated at the discretion of the Box Office, which can potentially mean partial view seating or split seats.