Get Discounts On The Woman In Black London Tickets!

About The Theatre
Seating Plan
The Woman In Black

A horror story presented in the form of a play doesn’t seem like the brightest idea what with the limitations and challenges of performing in front of a live audience. But ‘The Woman in Black’ isn’t your average horror story and this isn’t your average West End production. The now iconic stage play first opened in 1989 and there’s been no stopping this horror juggernaut ever since! The second longest-running play in West End history, ‘The Woman in Black’ is classic horror done right.

Adapted from a 1987 stage play which was based on the book written by English author Susan Hill, ‘The Woman in Black’ is unique in more ways that one. The biggest draw would be the fact that the entire play only features two actors! Currently, the cast includes Terence Wilton as Arthur Kipps and James Byng as The Actor. In 1989, when the show first opened, the cast featured Charles Kay as Arthur Kipps and John Duttine as The Actor.

Adapted from a 1987 stage play which was based on the book written by English author Susan Hill, ‘The Woman in Black’ is unique in more ways that one. The biggest draw would be the fact that the entire play only features two actors! Currently, the cast includes Terence Wilton as Arthur Kipps and James Byng as The Actor. In 1989, when the show first opened, the cast featured Charles Kay as Arthur Kipps and John Duttine as The Actor.

While the book this show is based on, features a linear narrative, the West End production has included the added element of a play within a play. The Woman in Black is the story of Arthur Kipps, a talented solicitor who is visiting the far-off town of Crythin Gifford to be at the memorial service of a client, Mrs. Alice Drablow. While at the funeral, Kipps witnesses a mysterious woman dressed in all black with a ghastly face. Startled, Kipps enquires about the woman in black to the local townsfolks but doesn’t get any response.

While in the town, he is also assigned with sorting his client’s papers, for which he visits Eel Marsh House, his deceased client's home. While going through Mrs Drablow's papers, he finds a crate of letters, and at last uncovers the dreadful mystery of the Woman in Black – to his own surprise. In the play, Kipps recruits an actor to help tell the unnatural things he has witnessed. What begins as an innocent investigation soon turns into a deep journey into Kipps’ deepest and darkest memories, one where haunted marshes and vengeful winds are commonplace! 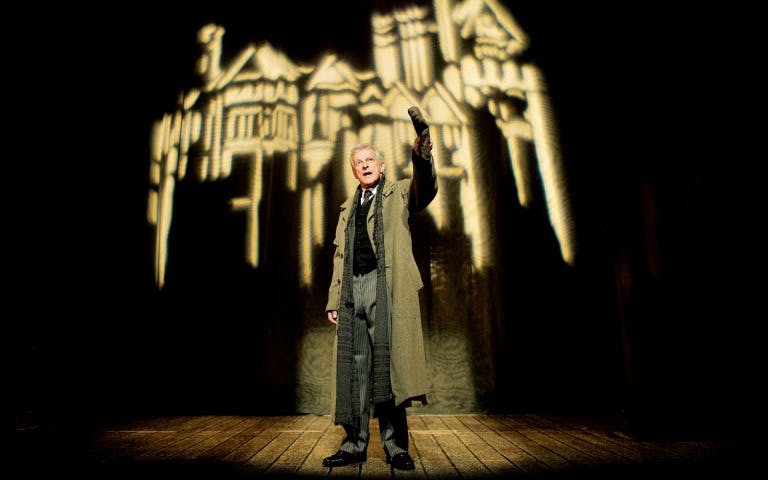 Use promo code WE10 and save £10 on The Woman In Black London tickets.

Audience
Recommended for ages 12 and above.

Seating
The Fortune Theatre has a seating capacity of 432.

The Woman In Black London Tickets

Looking out for discount on The Woman In Black London tickets !

Have a look at the real-time seat availability and prices of different sections for The Woman In Black London. In the interactive seat-map, select the date that you would like to watch the show and check out the seats available for that day. You can filter the seats as per your desired price range and purchase tickets directly.

Use promo code WE10 and save £10 on The Woman In Black London tickets.

“If you like scary stories, this show is for you!”
– Official Theatre

“It will scare the living daylights out of you.”
– The Express

Apart from getting tickets for The Woman In Black online, there are other ways to obtain West End tickets for cheap, such as:

The Woman In Black London TKTS

The website displays availability of tickets for the current day, along with the following two days. The Woman In Black TKTS tickets for the show are sometimes available.

The Woman In Black London Lottery

Day Seats are discounted tickets that are available for purchase, and are to be used, on the same day at the theatre. Please note that the availability of tickets is based on the discretion of the Fortune Theatre Box Office, and may not be available for all shows.

Day Seats at Fortune Theatre are currently unavailable for purchase.

Q: What time should I arrive at Fortune Theatre?
A: Doors open 45 minutes before show time. We recommend arriving at least 30 minutes before curtain.

Q: Is there a possibility that I will get partial view seating if I purchase discounted The Woman In Black London tickets?
A: When booking with Headout, you will get to select your specific seats, thus, ensuring you do not get stuck with partial view. However, if you opt to try and win lottery tickets, or purchase day seats, your seats will be allocated at the discretion of the Box Office, which can potentially mean partial view seating or split seats.

TThe Fortune Theatre, located on Russell Street near Covent Garden is a West End house best known for hosting the acclaimed production of The Woman in Black in 1989. The theatre is tiny, compared to other West End houses, and has a seating capacity of only 432 spread across three levels. Architect Ernest Schaufelberg was commissioned to design the theatre in an Italianate style. The theatre opened in 1924 and was the first performance venue to be built in London after the First World War. The theatre features a façade which is primarily made of bush-hammered concrete.