Get Discounts On The Comedy About A Bank Robbery Tickets London!

About The Theatre
Seating Plan
The Comedy About A Bank Robbery

The Comedy About a Bank Robbery takes forward the baton of fine-tuned ‘slapstick comedy’, a brand that the Mischief Theatre Company has perfected. Created by the makers of ‘The Play That Goes Wrong’, this play is all about, you guessed it right, a comedy about a bank robbery! It is a farcical take on the 1950s Hollywood bank robbery movies and brings together a motley crew of characters out in Minneapolis trying to steal a Hungarian Prince’s diamond stored in a bank. The adventurous set design enables enthusiastic actors to put up a unique show that derives its laughs from good writing and pure comedic acting skills.

It’s the summer of 1958 in Minneapolis and a convict Misch Ruscitti is escaping prison with the help of the prison guards. He returns home to his girlfriend Caprice, who is hardly the loyal partner, she is also courting more than one man. Misch’s next plan is now to steal a diamond from the banker Robin Freeboys, who is holding it for a Hungarian Prince. It turns out that Caprice is also Robin’s daughter!

Her other lover is Sam, who is a petty criminal and the son of Ruth Monaghan who works with Robin Freeboys in the bank. Everyone is connected, and they all have their eyes set on the big prize, the diamond in the bank! The story’s characters are suited for name-gags, slapstick pranks, and physical gags. With everyone planning a heist, who gets the jackpot? And who does Caprice end up with? Find out by watching The Comedy About A Bank Robbery today! 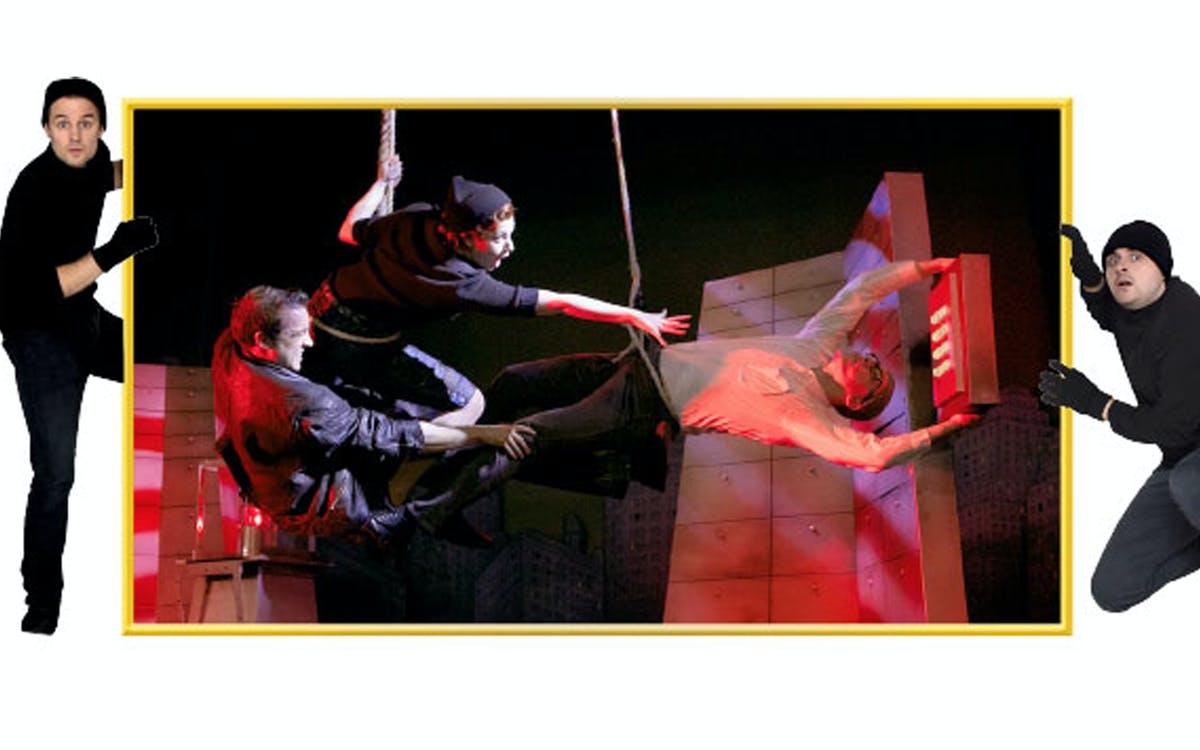 Click here to get a discount code for booking The Comedy About A Bank Robbery London tickets.

Duration
2 hours and 20 minutes, including 1 interval.

Audience
Suitable for ages 11 and up.

Seating
The Criterion Theatre has a seating capacity of 588.

The Comedy About A Bank Robbery Tickets London

Looking out for The Comedy About A Bank Robbery London tickets!

Have a look at the real-time seat availability and prices of different sections for The Comedy About A Bank Robbery. In the interactive seat-map, select the date that you would like to watch the show and check out the seats available for that day. You can filter the seats as per your desired price range and purchase tickets directly.

The Comedy About A Bank Robbery - Criterion Ticket Prices

Click here to get a discount code for booking The Comedy About A Bank Robbery London tickets.

The Comedy About a Bank Robbery first premiered at the Criterion Theatre on 21st April 2016 and has been running since then at the same theatre.

“This thrillingly inventive piece about bed-hopping gem thieves is a slapstick delight.”
– The Guardian

“Is this a show that says smart things about the banking crisis? Not a jot. Does it deliver swag-loads of pleasure and thoroughly deserve to make a mint? Absolutely."
– Telegraph

Apart from getting tickets for The Comedy About A Bank Robbery London online, there are other ways to obtain West End tickets for cheap, such as:

The Comedy About A Bank Robbery London TKTS

The Comedy About A Bank Robbery London TKTS tickets are sometimes available for purchase.

The Comedy About A Bank Robbery London Lottery

The Comedy About A Bank Robbery London Day Tickets

Day Seats are discounted tickets that are available for purchase, and are to be used, on the same day at the theatre. Please note that the availability of tickets is based on the discretion of the Criterio Theatre Box Office, and may not be available for all shows.

Day Seats at Criterion Theatre are currently available for purchase. A limited number of top non-premium price seats are available in advance at www.criterion-theatre.co.uk for Tuesday and both Sunday performances reduced to £25 each.

Q: What time should I arrive at Criterion Theatre?
A: Doors open 45 minutes before show time. We recommend arriving at least 30 minutes before curtain.

Q: Is there a possibility that I will get partial view seating if I purchase discounted The Comedy About A Bank Robbery London tickets?
A: When booking with Headout, you will get to select your specific seats, thus, ensuring you do not get stuck with partial view. However, if you opt to try and win lottery tickets, or purchase day seats, your seats will be allocated at the discretion of the Box Office, which can potentially mean partial view seating or split seats.