Get Discounts On Joseph The Musical London Tickets!

About The Theatre
Seating Plan
Joseph

‘I wore my coat, with golden lining, Bright colours shining, wonderful and new’ - millions of children and adults have sung the lyrics of ‘Any Dream Will Do’ from the hit musical ‘Joseph and the Amazing Technicolor Dreamcoat.’ One of the most popular family-musicals ever, it is coming back to West End to enthrall families once again in the summer of 2019. The musical by Andrew Lloyd Webber with lyrics by Tim Rice narrates the story of Joseph and his journey through Egypt, and his magical ability to interpret dreams. Relive nostalgia and sway to the soulful music of Webber and be mesmerized by the colorful coat!

The musical is a favorite of schools across the world and has been loved due to its positive message of loyalty and perseverance against all the odds. It is also one of the longest-running touring stage musicals and features the combo of Andre Lloyd Webber and Tim Rice who created other popular musicals ‘The Likes of Us,’ ‘Jesus Christ Superstar,’ ‘Evita,’ ‘Cricket’ and ‘The Wizard of Oz.’ The cast for the limited West End revival is yet to be announced.

The musical draws inspiration from the story of Joseph in the Book of Genesis. Jacob, the patriarch of Israelites, has twelve sons of whom Joseph is his favorite. He presents him a beautiful coat of many colors, which we know as the ‘Amazing Technicolor Dreamcoat’! The coat and his closeness to their father upset Joseph’s brothers who wish ill of him. They sell him off to Ishmaelites who take him to Egypt and enslave him in the house of Potiphar.

Potiphar’s wife has unsavory intentions on Joseph which he rejects, and eventually, he lands up in jail. During his jail time, he correctly interprets the dreams of his fellow inmates. One of them takes him to the Pharaoh, who is befuddled with his dreams. Joseph’s ability to interpret the dream enables him to become a prominent man in Egypt. Thanks to Joseph, Egypt survives famine, and his family comes seeking refuge. Watch the musical to find out whether Joseph forgives them and finds his Dreamcoat again! 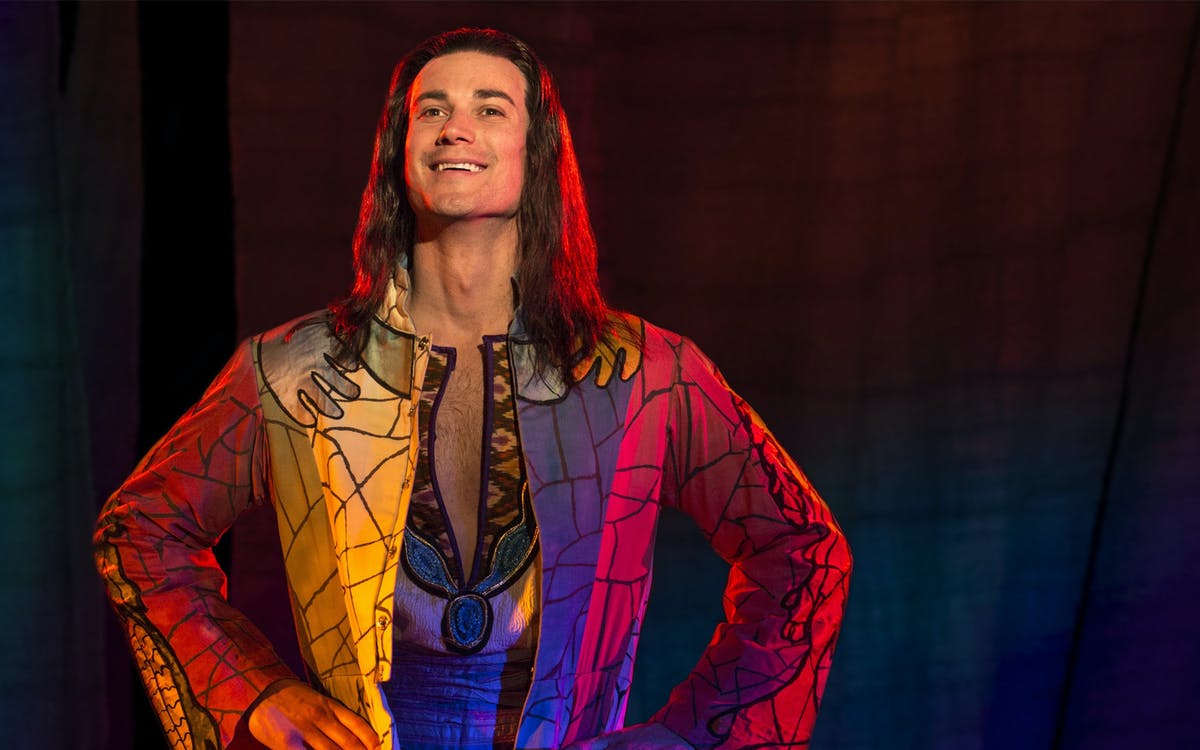 Click here to get a discount code for booking Joseph The Musical London tickets.

Seating
The London Palladium has a seating capacity of 2,286.

Looking out for Joseph The Musical London tickets !

Have a look at the real-time seat availability and prices of different sections for Joseph. In the interactive seat-map, select the date that you would like to watch the show and check out the seats available for that day. You can filter the seats as per your desired price range and purchase tickets directly.

Click here to get a discount code for booking Joseph The Musical London tickets.

17-year-old Andrew Lloyd Webber wrote the concept of this musical back in 1965, after that it went through several revisions and performances before premiering at West End in 1973. Consecutively, it also premiered on Broadway in 1982. Since then, the musical has been performed across 80 countries by various groups.

The original West End production revival will perform in the summer of 2019 for a limited engagement at London Palladium from 27th June 2019 – 7th September 2019.

“Mighty and Explosive!"
– The Stage

Apart from getting tickets for Joseph The Musical online, there are other ways to obtain West End tickets for cheap, such as:

Day Seats are discounted tickets that are available for purchase, and are to be used, on the same day at the theatre. Please note that the availability of tickets is based on the discretion of the London Palladium Box Office, and may not be available for all shows.

Day Seats at London Palladium are currently unavailable for purchase.

Q: What time should I arrive at London Palladium?
A: Doors open 45 minutes before show time. We recommend arriving at least 30 minutes before curtain.

Q: Is there a possibility that I will get partial view seating if I purchase discounted Joseph The Musical London tickets?
A: When booking with Headout, you will get to select your specific seats, thus, ensuring you do not get stuck with partial view. However, if you opt to try and win lottery tickets, or purchase day seats, your seats will be allocated at the discretion of the Box Office, which can potentially mean partial view seating or split seats.

Joseph and the Amazing Technicolor Dreamcoat will play at the London Palladium in 2019. The London Palladium is West End’s most famous theatre and known to play musicals and high-profile concerts, including the annual Royal Variety Performance. The theatre opened in December 1910 and is today, protected as a heritage building. The building’s facade is historic and harks back to Roman architecture, inside it seats up to 2,286 theatergoers across three levels. Some of the notable productions at the London Palladium are Sound of Music, Chitty Chitty Bang Bang, Cinderella, The King and I, and Snow White.