Save
4.6
(248 Ratings)
Instant Confirmation
Show Tickets on Your Phone
Skip the Line and Save Time
1 hr 25 mins
Best Safety Standards
This experience has been verified to follow best safety standards in compliance with local regulations and WHO
Safety Details

The Doges of Venice ruled over the Republic of Venice for over four centuries from the magnificent Doge’s Palace. Built in 1340, the palace complex designed in traditional Gothic architecture witnessed the highs and lows of Venetian history. This tour explores the secrets of the Doge’s Palace and its stories of wealth and injustice.

Celebrated artists of the Renaissance have left their legacy at the Doge’s Palace including greats like Titian, Gentile da Fabriano, Pisanello, Giovanni Bellini, Alvise Vivarini and Pordenone. The ones that are certain to capture your imagination are the ‘Virtues of the Republic’ by Veronese in the Council Room and ‘The Triumph of Venice’ by Tintoretto on the Senate Hall ceiling. Yet, the beautiful murals, paintings, and decadent interiors tell only one side of the story!

Your guide will take you to the attic to see for yourself Casanova’s cell. The world’s most famous lover, Casanova, plotted his escape from the dark prison of the palace. Your guide will reveal to you the secrets of his feat of hoodwinking the palace security and escaping the prison.

But not all prisoners were as lucky! You can imagine hearing the sighs of the prisoners who would walk the length of the Bridge of sighs to the 16th century New Prisons. The brilliant vantage point, which overlooks the beautiful panorama of Venice, would naturally have drawn sighs of regret all those centuries ago!

Your guide will take you through the secret wing beginning at the Chambers of Secret Chancellery where ancient documents were stored. You will also follow a prisoner’s journey from the Chamber of Inquisitors, Chamber of the Three Head Magistrates and finally the Torture Chambers. If the prisoner was lucky the torture would stop within three days and then he would be taken to his cell.

Sights visited on the tour

Non-Guided - (Visit on your own time)

The tour lasts for about 1.25 hours. The tour is conducted at the following times:

This tour will be conducted in English only.

- Meet your guide at the foot of Ponte della Paglia , 30124 Venice, Metropolitan City of Venice, Italy
- Your guide will be at the foot of the bridge, facing the lagoon. He/She will be wearing blue polo shirts or jackets at the meeting point for easy recognition and holding a sign with the tour name.
To locate the meeting point on Google Maps, simply search for - Ponte della Paglia

Get Directions To Your Your Meeting Point

Getting To Ponte della Paglia

- The nearest Vaporetto Station is S. Zaccaria. From here, your meeting point is a 2 minute walk away.
- The nearest Gondola dock is Gondole Stazio Danieli. If you're coming via a gondola, you can asked to be dropped here. 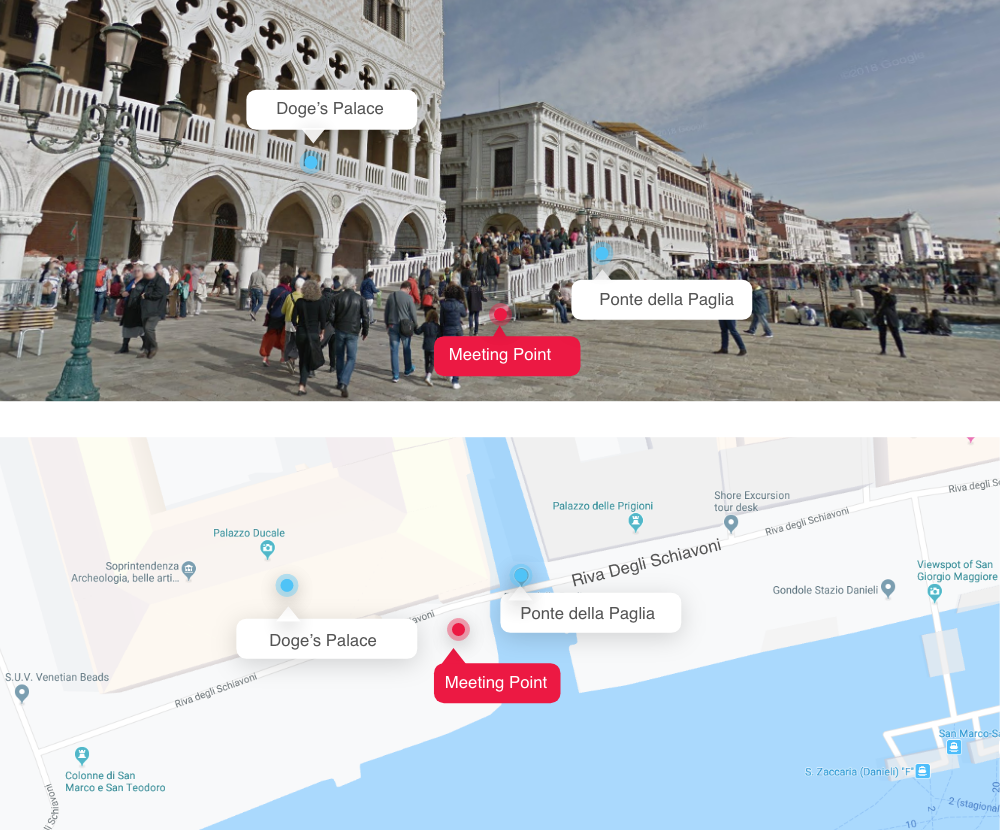 - Late arrivals and people who miss their tour will be considered a no-show and will not be eligible for a refund
- These tour reservations have strict timings. If you are late, it will not be possible to join the group, unless you pay for the activity again (subject to availability).