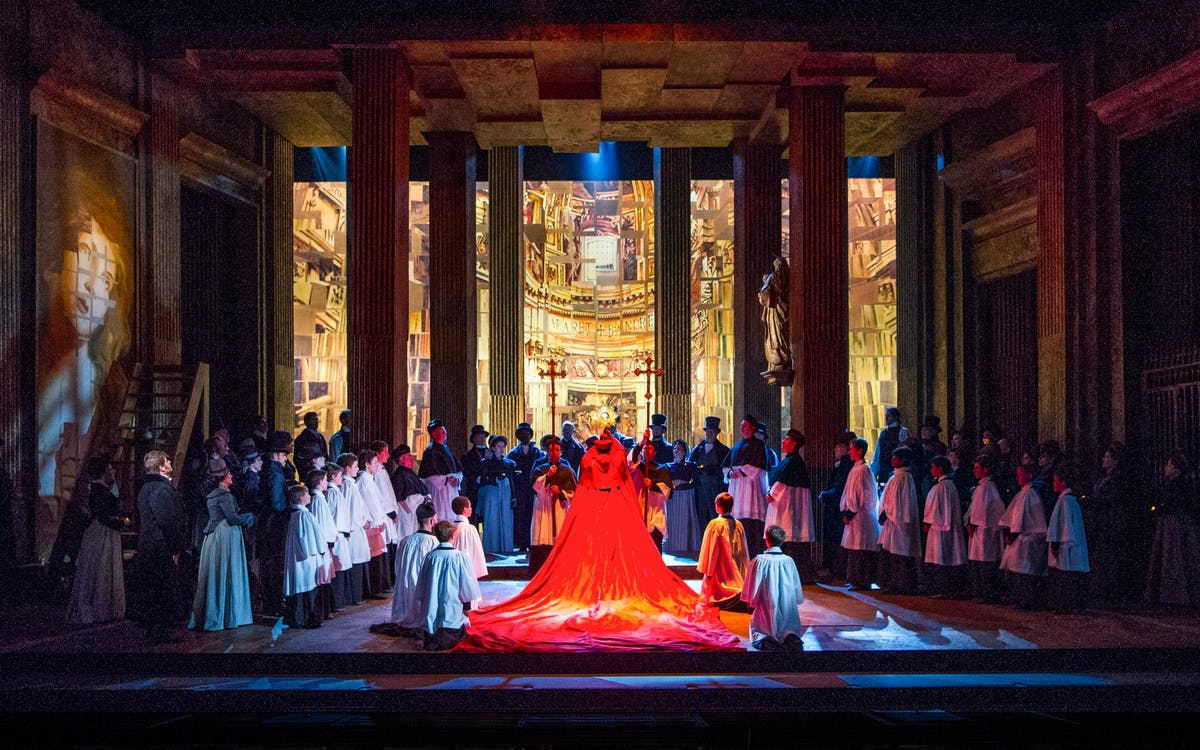 Secure your seats for the limited run of one of the world's most loved operas, playing at London Coliseum for one month only.

Set in East Germany in 1989, in the shadow of the Berlin Wall. Meet Tosca, the fiery opera singer, whose lover, Mario Cavaradossi, is under fire for helping a fugitive escape. He is captured and tortured by one of the most malevolent villains in Opera -- the Chief of Police, Scarpia. What follows is a tale of love, lust, intrigue, and murder. Watch the story unfold in the dying days of communism, as the government turns to terrifying levels of surveillance in a desperate bid to retain power.

Full of passion and political intrigue, Puccini’s Tosca is one of the most beloved operas of all time. Jonathan Kent’s intense production and the historically charged designs of Paul Brown come together to play out the face off between love and evil. Sinéad Campbell-Wallace and Adam Smith lead the cast, including Noel Bouley, Msimelelo Mbali, Lucia Lucas, John Findon, and Ossian Huskinson.

Missing any information?
Yes
No
from
£12
Check availability
Best price guaranteed
Why Headout?
Trusted platform used by 100K+ people, each month
Get the lowest prices and last minute availability
Discover and connect with 10,000+ experiences
Browse verified reviews and professional photographs
Have a question? Live chat with our experts 24/7
Other experiences similar to Tosca
Musicals
The Lion King
Instant Confirmation
4.5
(2.3K)
from £42
Musicals
Mamma Mia!
Instant Confirmation
4.5
(1.9K)
from £18
Musicals
Les Miserables
Instant Confirmation
4.5
(1.3K)
from £24
Musicals
Wicked
Instant Confirmation
4.5
(2K)
from £23.40
Musicals
Mary Poppins
Instant Confirmation
4.5
(814)
from £24
The world on your tap!Get the Headout app to get tickets on your phone and access app-only deals. Talk about win-win.
We've served 15 million+ guests and we are here for you
15 million +Happy customers across 10,000+ experiences
4.4/55,000+ verified reviews with 90% excellent score
In the MediaFeatured and recommended by the best brands
24 x 7 Help CenterHave a question? Live chat with local experts anywhere, anytime
Headout is building the future of how we experience our cities.
Made with ❤️ all over the 🌎
Headout Inc.
82 Nassau St #60351 New York, NY 10038
Cities
New YorkLas VegasRomeParisLondonDubaiBarcelona+74 more
Headout
About UsHelpCareersTravel BlogCompany BlogCreator Partnerships
Partners
Join HeadoutSupply Partner HubAffiliates
© Headout Inc
Privacy PolicyTerms of Usage