About The Theatre
Seating Plan
Six The Musical

This show is now closed.

Her-story is being recreated Tudor-style with punk gowns and diva impersonations in this epic musical, Six. The six wives of King Henry VIII have been reduced to just a word in a Kindergarten poem, ‘Divorced, Beheaded, Died, Divorced, Beheaded, Survived.’ But, there is more to these wives, what if they expressed themselves? These wives form the ultimate girl band ala the Spice Girls and grab the microphone to sing out their woes, argue, sympathize, and finally get their say! The musical written by young writers Toby Marlow and Lucy Moss, is a feminist (and fun) take at one of the most regressive periods in history.

This guide offers all the information you need to know about Six along with helping you purchase discounts tickets for the show.

Six first featured on the Edinburgh Fringe festival, a brave attempt at mixing musical theatre with period drama. The music and lyrics are written by the first-time duo, Toby Marlow and Lucy Moss, who bring their 21st century feminist and progressive ideas to give the Queens a voice. The soundtrack is rousing, and the cast is packed with brilliant singers and actors who truly manifest their inner Queen for the show. Jarneia Noel, Millie O’Connell, Natalie Paris, Alexia Mcintosh, Aimie Atkinson, and Maiya Breed take the stage in this musical riot and make it a glorious spectacle!

Six, Divorced & Beheaded, Live in Concert is an all-out musical extravaganza about the six wives of King Henry VIII. The musical is a rock concert featuring the six wives, who sing about their lives and how unfair the King and history have treated them. With solo songs and group numbers, the women out-do each other’s tragedy and narrate which one of their fate’s is worse.

King Henry VIII’s six wives suffered terrible fates, and were Katherine of Aragon (Divorced), Anne Boleyn (Beheaded), Jane Seymour (Died), Anne of Cleves (Divorced), Catherine Howard (Beheaded), and Catherine Parr who was the only one who survived the King and went on to marry another man.

The company music numbers include songs ‘Ex-Wives’, ‘Haus of Holbein,’ and ‘Six,’ while the individual numbers reflect the personalities of each of the wives and encapsulate their rage and chance at history. 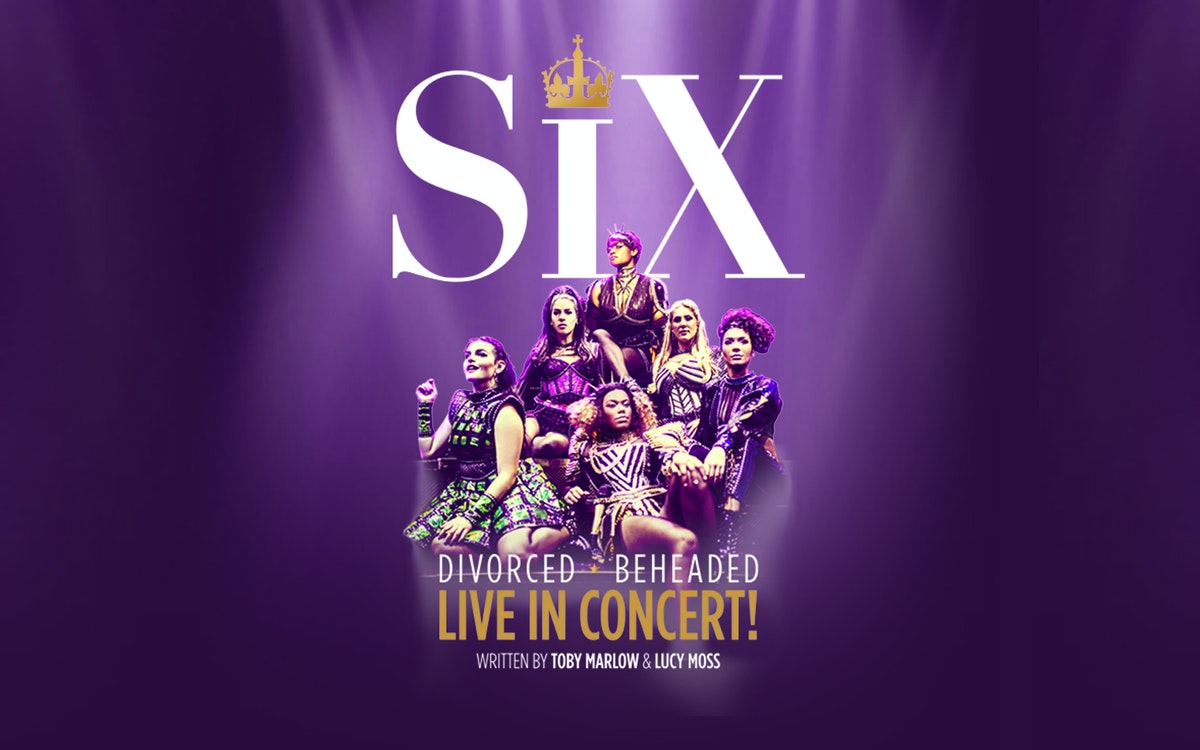 Audience
Children under 10 will not be admitted.

Seating
The Lyric Theatre has a seating capacity of 887.

“Anne Boleyn, Jane Seymour and co tell their stories in a lively new musical that makes serious points about how women are erased from history”.
– The Guardian

“The grand surprise, though, is just how gloriously – persuasively – coherent, confident and inventive the whole thing is”.
– Telegraph

Looking out for Six The Musical London ticket discounts !

Have a look at the real-time seat availability and prices of different sections for Six The Musical London. In the interactive seat-map, select the date that you would like to watch the show and check out the seats available for that day. You can filter the seats as per your desired price range and purchase tickets directly.

Lyric Theatre, located in Shaftesbury Avenue,first opened its doors to the public in 1888 with the hit comic opera Dorothy. Since then, it has been home to numerous shows and musicals, the latest of which is Six, with its reopening on 21 May 2021. Conveniently located near Piccadilly Circus, you can reach the Lyric theatre via bus, tube, and cab.

Apart from getting tickets for Six The Musical online, there are other ways to obtain West End tickets for cheap, such as:

In this guide, we help you find the best way to obtain Six The Musical tickets at discounted rates.

Six The Musical TKTS tickets are currently unavailable for purchase.

Day Seats at Arts Theatre are currently unavailable for purchase.

Where is Six the Musical playing in London?

Six the Musical is playing at the Lyric Theatre, London.

How many people can Lyric Theatre, London accommodate?

Lyric Theatre, London can accommodate up to 967 guests.

What is Six the Musical about?

Six is an all-out musical extravaganza about the six wives of King Henry VIII. The musical is a rock concert featuring the six wives, who sing about their lives and how unfair the King and history have treated them.

What is the duration of Six play?

Six musical runs for 1 hour and 10 minutes with 1 interval.

Who can watch Six the Musical?

Children above the age of 10 will be admitted for the show.

How can I reach Lyric Theatre, London?

You can reach Lyric Theatre, London via cab, bus, or tube.

Does Six have accessible tickets?

Yes. Since Lyric Theatre welcomes disabled guests and strives to make the show accessible for everyone, viewers can purchase accessible tickets for Six.

How much does the Six ticket cost?

While the ticket price varies depending on your seat selection, you can watch Six for as low as £38.88

Are there cheaper tickets for Six the Musical available?

Yes. Depending on the seat of your choice, you can find cheaper tickets for Six the Musical.

Is there a way to purchase Six The Musical TKTS tickets online, instead of waiting in line at the TKTS booths?

What time should I arrive at Lyric Theatre?

Is there a possibility that I will get partial view seating if I purchase discounted Six The Musical London tickets?