Get Discounts On Fiddler On The Roof London Tickets!

About The Theatre
Seating Plan
Fiddler On The Roof

Tevye would not find himself entirely out of place in 2019, where people around the world are turning nationalistic and holding on to ideas that were best left in the 20th century. Trevor Gunn’s revival comes at an opportune time when the world needs to be reminded of the horrors of the past, to make sure history does not repeat itself. Beyond the political, the show also explores the ever-present generational mindset shift and the value of familial traditions and values. Watch the excellent revival of ‘Fiddler on the Roof’ to witness Tevye navigate his relationship with his daughters and their fate as a Jewish family stuck in the Tsar’s pogroms.

Trevor Nunn, the Tony and Olivier award-winning director behind musicals such as Cats and Les Miserables, has directed the latest revival of Fiddler on the Roof. He has worked on the original creative work of Joseph Stein, Jerry Bock, and Sheldon Harnick. The choreography is led by Matt Cole, who has also retained elements of the original choreographer Jerome Robbins.

The highlight of the show is the intimate theatre that has been transformed by Robert Jones. Paul Bogaev and Jason Carr bring alive the music of songs like ‘Tradition’, ‘Matchmaker, Matchmaker’, ‘Sunrise, Sunset’, and ‘If I were a Rich Man’. The cast is led by Andy Nyman in his role of Tevye and includes Judy Kuhn, Nicola Brown, Harriet Bunton, Dermot Canavan, Stewart Clarke, Joshua Gannon, Matthew Hawksley, Louise Gold, and Molly Osbourne.

The year is 1905 in a fictitious Russian village Anatevka, where a Jewish milkman Tevye lives with his wife Golde and their five daughters, Tzeitel, Hodel, Chava, Shprintze and Bielke. In an era when the first whispers of anti-Semitism were brewing, Tevye believes that it's only the traditions of the community that keep them together because their lives are, after all, as precarious as a ‘Fiddler on the Roof’. His traditions and beliefs are challenged when he finds out that his three elder daughters want to choose their men.

The girls want to marry men who love them challenging the custom of arranged marriages; they want to marry tailors and revolutionaries, and Tevye thinks it might just be time to change because the world is changing. He draws the line when one of them wants to marry a non-Jewish man. But by now, the fires of unrest are raging, and pogroms are unfolding in their village! What happens to his daughters, do they marry the men they love? And what happens to the family, do they survive? Find out in the Fiddler on the Roof this spring! 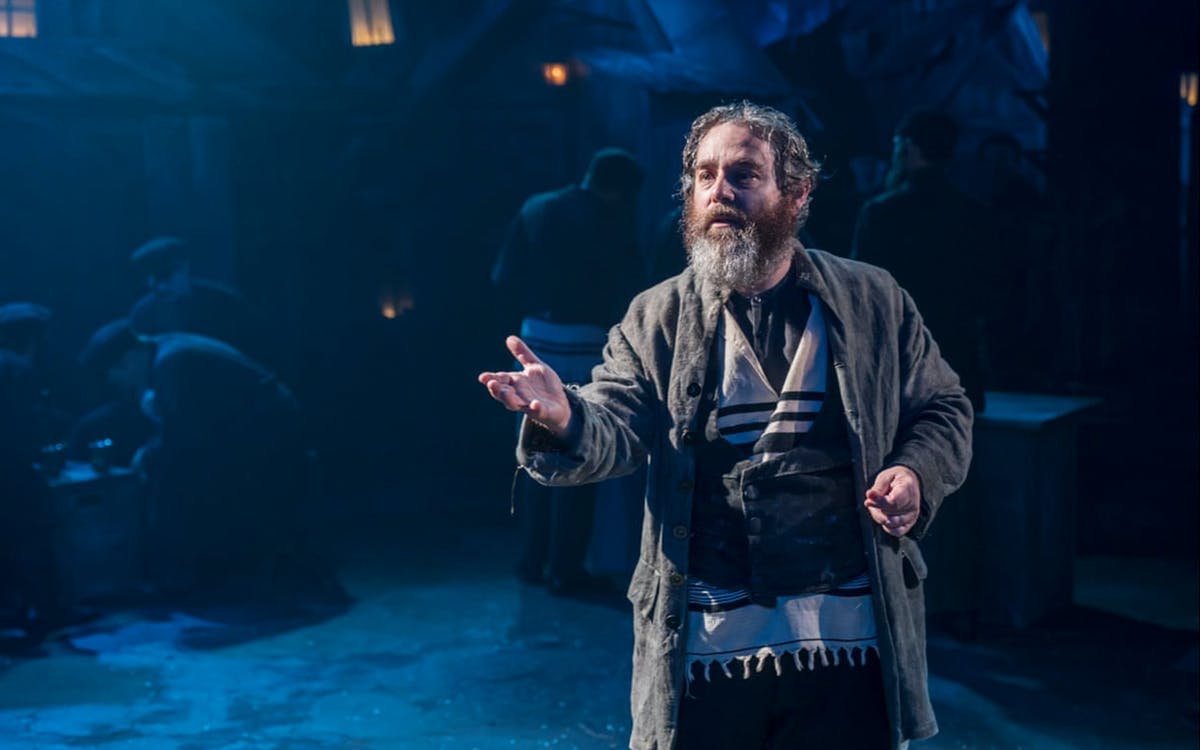 Click here to get a discount code for booking Fiddler On The Roof London tickets.

Duration
2 hours and 50 minutes, including 1 interval

Seating
The Playhouse Theatre has a seating capacity of 786.

Fiddler On The Roof London Tickets

Looking out for Fiddler On The Roof London tickets?

Have a look at the real-time seat availability and prices of different sections for Fiddler On The Roof London. In the interactive seat-map, select the date that you would like to watch the show and check out the seats available for that day. You can filter the seats as per your desired price range and purchase tickets directly.

Click here to get a discount code for booking Fiddler On The Roof London tickets.

Fiddler on the Roof is amongst the most famous musicals in the world and avidly performed in schools and institutions around the globe. The original Broadway production premiered in 1964, while the original West End production premiered in 1967 at Her Majesty’s Theatre. The latest revival by Trevor Nunn played at the Menier Chocolate Factory in 2018 and will be premiering at the West End for a limited period from 21st March 2019 to 15th June 2019 at the Playhouse Theatre.

“Musically, geopolitically, emotionally, this Fiddler raises the roof.”
– The Guardian

Apart from getting tickets for Fiddler On The Roof London online, there are other ways to obtain West End tickets for cheap, such as:

TKTS: The TKTS booth obtains its inventory directly from the theatre based on availability, and sells them for cheap. Refer our detailed guide.

Fiddler On The Roof London TKTS

Fiddler On The Roof London TKTS tickets are currently unavailable for purchase.

Fiddler On The Roof London Lottery

RUSH TICKETS: These tickets are offered on a first-come-first-served basis at the theatre box office.

Fiddler On The Roof London Rush

A collaboration between TodayTix and the Playhouse Theatre is offering £25 Rush tickets for Fiddler on the Roof. For each performance, a limited number of £25 Rush tickets will be made available, on a first-come, first-served basis. To grab hold of this feature, share the word about the production on social media via the TodayTix app.

Q: What time should I arrive at Playhouse Theatre?
A: Doors open 45 minutes before show time. We recommend arriving at least 30 minutes before curtain.

Q: Is there a possibility that I will get partial view seating if I purchase discounted Fiddler On The Roof London tickets?
A: When booking with Headout, you will get to select your specific seats, thus, ensuring you do not get stuck with partial view. However, if you opt to try and win lottery tickets, or purchase day seats, your seats will be allocated at the discretion of the Box Office, which can potentially mean partial view seating or split seats.