Why Watch a Show at the Moulin Rouge?

“This risqué world-famous cabaret, performed in a 19th-century windmill, has been exciting audiences since 1900.”
- TripAdvisor

Situated in the heart of the lively Montmartre district, the Moulin Rouge is instantly recognizable with its lipstick-red facade and giant windmill. For over 125 years, the theater has been showcasing the talent of hundreds of actors, dancers, make-up artists, costume designers and stage decorators, including the legendary Ella Fitzgerald, Liza Minelli and Frank Sinatra. Known as the birthplace of the French can-can dance, the Moulin Rouge was co-founded by Joseph Oller and Charles Zidler with one main objective in mind: to become the greatest venue embracing the art of dance, entertainment and femininity. An early harbinger of female liberation and empowerment, in the world of cabaret, it’s the ladies who lead the show!

Since the theatre first opened it’s doors in October of 1889, the Moulin Rouge continues to evoke the spirit of a festive Paris. A production that highlights pleasure, fun and freedom, the cabaret attracts 600,000 spectators a year. With a sensational explosion of feathers, sparkles and color, witness the French can-can come to life as you sip champagne in one of the most beloved entertainment hotspots.

The current show being performed at the Moulin Rouge is “Féerie”. A fantastic cabaret review, the production brings together an extensive troop of performers, including 60 beautiful Doriss Girl Dancers recruited from all over the world, costumes created in Paris's prestigious studios, and stunning rich color stage sets created by Italian artists. Guests can attend a show with or without dinner and can also select ticket options that include champagne.

Dinner Show - Is it worth it?

Make the most of your evening with a Moulin Rouge dinner and show combo, available daily for the 9pm performance of “Féerie”.

What you get
Your dinner show experience begins with a 7pm early-bird entrance to the Moulin Rouge. Enjoy an outstanding 3 course meal accompanied by live orchestral music before the cabaret’s main show begins at 9pm.

About the Moulin Rouge restaurant
Led by Chef David le Quellec, sous-chef Alexis Mathey and a team of 25 talented cooks, the Moulin Rouge restaurant is just as good as its cabaret. A French gastronomical experience, a dinner show is a treat for all the senses. When making a reservation for a dinner show, you will have the option to choose between several menus, including vegetarian and vegan options.

Perks of a Dinner Show
- Guests attending the dinner portion of a 9pm show are seated at 7pm, as opposed to 9pm, giving you a huge advantage in terms of getting good seats.
- Enjoy two additional hours at the Moulin Rouge, for a total of four hours. A dinner show gives you plenty of time to soak up the invigorating atmosphere of the cabaret.

There is no difference between the 9pm and the 11pm show. The performances are exactly the same. However, the 9pm show (both with and without the dinner) tend to sell out the quickest. It’s advised you book at least 2 weeks in advance.

Get more information about the Moulin Rouge Late Night Show with Champagne experience.

Check multiple items off your Paris bucketlist with a Moulin Rouge combo ticket. An excellent way to save money, our combination tickets are specially designed to help you experience the best of Paris, without breaking your wallet. 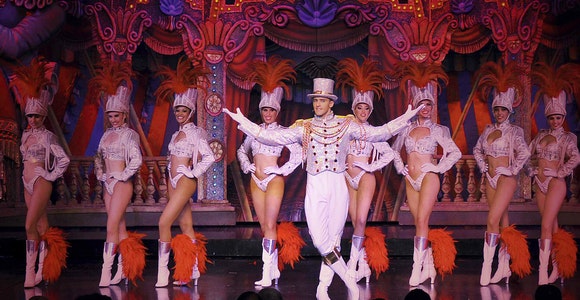 Embark on a relaxing one-hour cruise along the Seine River and pass by famous landmarks as you take in one of the most beautiful Parisian boulevards. Your flexible ticket allows you to board the cruise anytime you’d like during the day, within the operating hours. After your cruise, head to the legendary Moulin Rouge and witness the French can-can come to life in a colorful explosion of feathers and sequins. Sip champagne as you enjoy a bedazzling performance by a the cabaret’s talented troupe of performers. Please note, this tour does not include transfers.

Make the most of your time in Paris with a 3-in-1 tour package to some of the most sought after Parisian experiences. Enjoy a charming dinner on the famous floating restaurant, La Marina de Paris. Afterward, head to the Eiffel Tower, where your skip-the-line ticket will give you priority access to the 2nd floor. Take in the unique views of the French capital from 377 feet up! Last, but certainly not least, head to the legendary Moulin Rouge. With the a breathtaking 11 pm "Feerie" show, witness the Moulin Rouge’s talented troupe of 80 performers in a stunning, colorful stage performance. This tour includes transfers between activities, as well as back to your accommodation in Paris after your show at the Moulin Rouge.

The Moulin Rouge is open every day of the week from 7pm to 1am. There are two shows per night, the first at 9pm and the second at 11pm. (The 11pm show is only on Fridays and Saturdays.) Guests can have dinner at 7pm before the first show starts at 9pm, allowing for two extra hours inside the fabulous Moulin Rouge.

Please note
It is recommend to arrive at least 30 minutes before start time.

Do I Need to Book Tickets in Advance?

Why Book with Headout

Save Time
With a quick and easy booking flow, secure your cabaret tickets within minutes.

24-7 Help Line
Have any questions about your experience? Customer service representatives are available around the clock.

Dress code
Smart attire is required to enter the Moulin Rouge. For men, a jacket and tie are appreciated, but not required. Shorts, flip flops, sportswear and sports shoes are not permitted.

Will there be a cloak room?
Yes. Attendants are on hand to look after coats and bags stored during the show.

How long is the show?
A cabaret show at the Moulin Rouge is 2 hours long.

What language is the show in?
The show at the Moulin Rouge is in French, but it is not necessary to speak the language to get the full enjoyment out of the show! A lot of the performance is taken up with singing and dancing, and even if you don’t understand exactly what is being said some of the tunes will be familiar and you should be able to understand what is happening. The Moulin Rouge is visited by thousands of tourists of all nationalities every year, suggesting that not speaking French is certainly not a barrier to having a good time! 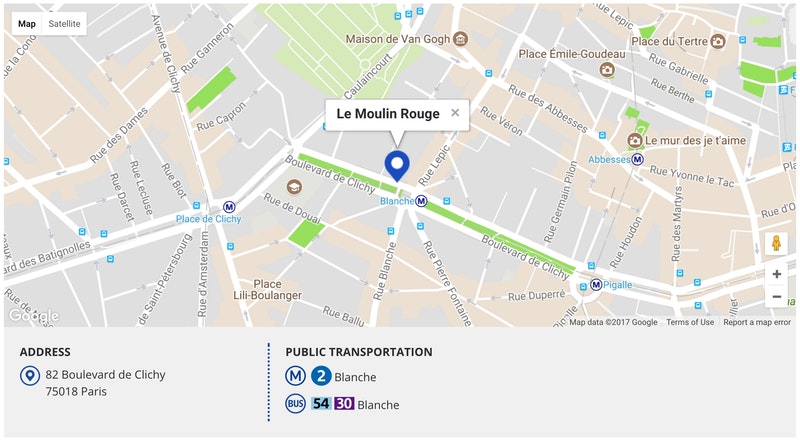 From the Louvre Musuem
From either Louvre Rivoli or Palais Royale Musée de Louvre, take line 1 (yellow) of the Métro until you reach Charles-De-Gaulle/Etoile. Switch to line 2 and continue until you reach Blanche.

How can I be sure to get a good seat?
There are no pre-assigned seats at the Moulin Rouge; when you arrive, an usher will guide you to your seat on a first-come-first-served basis. The best tip for scoring a good seat is to arrive early. However, guests attending the dinner portion of a 9pm show are seated at 7pm, as opposed to 9pm, giving you a huge advantage in terms of getting good seats! Learn more about this experience.

Which seats are the best?
Seats at the very front of the stage are generally considered to be the best, as they offer a detailed view of the dancers. However, with that being said, there are no ‘bad’ seats inside the Moulin Rouge. The theatre is quite small and curves in a horseshoe shape around the stage, so even if you end up sitting at a table in the back or off to the side, you’ll be able to turn your chair and face the stage. Those in the middle or further back also have the advantage of seeing a wider panorama of the whole stage, which is also a great experience.

What is the minimum age for watching the show?
Children aged 6 and above are admitted to the Moulin Rouge. All minors must be accompanied by an adult. When deciding whether or not to bring minors, keep in mind that there is nudity throughout the show. While the sow is tasteful, you will need to use your own discretion.

Can I take photos of the show?
For copyright and security reasons, taking photographs during the show is strictly prohibited. It is also forbidden to photograph, film, or record any part of the Moulin Rouge theatre and the show.

Where can I purchase Moulin Rouge Souvenirs?
During the day, you can find some great Moulin Rouge souvenirs at a shop located around the corner from the theater, on Rue Lepic. Otherwise, after and before the show, there is a small glass counter in the foyer which also sells souvenirs.

Flashback: Moulin Rouge shows from the last 60 years
Since 1963 and the success of the Frou-Frou revue, out of superstition Jacki Clérico chooses only revue titles that start with the letter F. Naturally, the famous French cancan is performed at every revue. Here’s a look into the six decades of cabarets that have graced the Moulin Rouge.