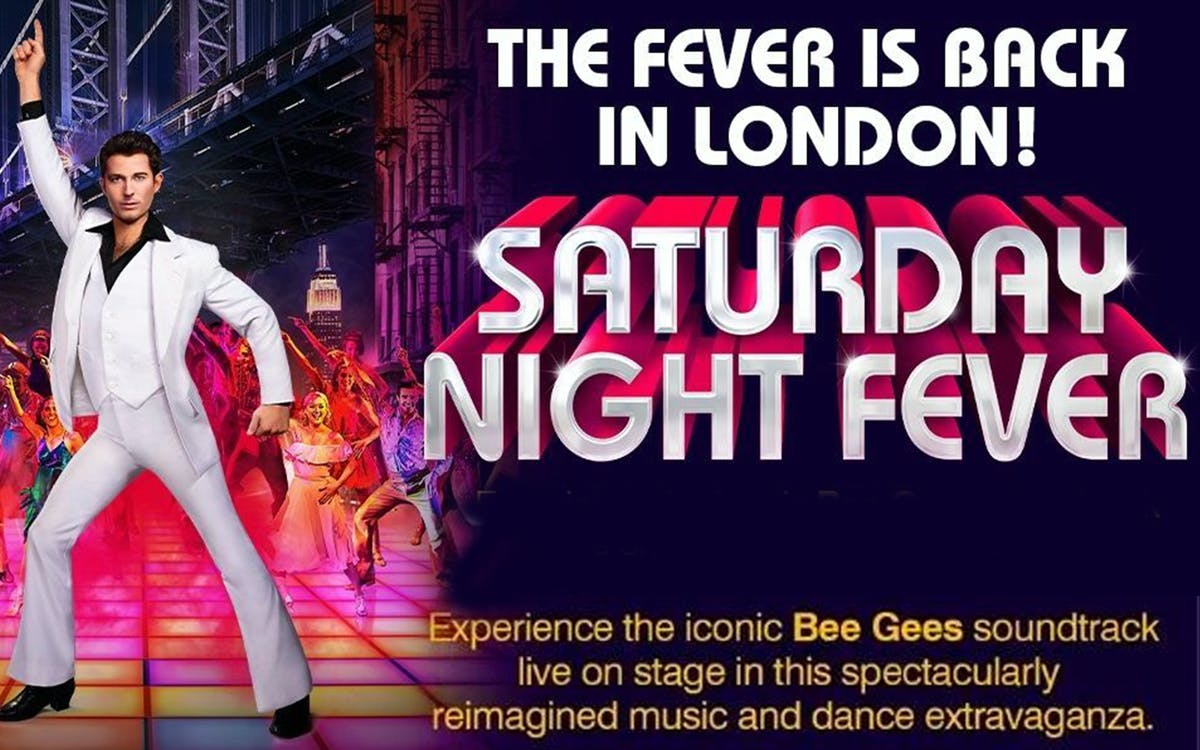 Strap on your dancing shoes and head out to see the hottest show in London!

Saturday Night Fever follows the story of Tony Mareno and his rash road to dancing success. The music features the Bee Gees' greatest hits, and will have you tapping your foot throughout! Songs include Stayin' Alive, How Deep Is Your Love, Night Fever, Tragedy, and More Than a Woman. The production has also sought special permission to use two other Bee Gee hits - Too Much Heaven and Words.

The musical not only pays homage to the movie but also promises more music and hot new choreography. Onstage actor-musicians are convincing in the roles of the Bee Gees, and croon the hit soundtrack alongside a talented cast (to be announced). Bill Kenwright is the director, whereas the choreography is by Bill Deamer. Further creatives include Gary McCann for scenic design, Nick Richings for lighting design, and Dan Samson for sound design.

Adapted for the Stage By

You will get an e-mail confirmation with your Saturday Night Fever voucher. Please display the same on your mobile phone with a valid photo ID.

Missing any information?
Yes
No
This experience is unavailable
You'll be the first to know when these tickets are back online.
notify me
Awesome!We will notify you.
Why Headout?
Trusted platform used by 100K+ people, each month
Get the lowest prices and last minute availability
Discover and connect with 10,000+ experiences
Browse verified reviews and professional photographs
Have a question? Live chat with our experts 24/7
Other experiences similar to Saturday Night Fever
Musicals
Wicked
Instant Confirmation
4.5
(2K)
from £23.40
Musicals
The Lion King
Instant Confirmation
4.5
(2.3K)
from £42
Musicals
Mamma Mia!
Instant Confirmation
4.5
(2K)
from £18
Musicals
Matilda The Musical
Instant Confirmation
4.5
(1.6K)
from £24
Musicals
Les Miserables
Instant Confirmation
4.5
(1.3K)
from £24
The world on your tap!Get the Headout app to get tickets on your phone and access app-only deals. Talk about win-win.
We've served 15 million+ guests and we are here for you
15 million +Happy customers across 10,000+ experiences
4.4/55,000+ verified reviews with 90% excellent score
In the MediaFeatured and recommended by the best brands
24 x 7 Help CenterHave a question? Live chat with local experts anywhere, anytime
Headout is building the future of how we experience our cities.
Made with ❤️ all over the 🌎
Headout Inc.
82 Nassau St #60351 New York, NY 10038
Cities
New YorkLas VegasRomeParisLondonDubaiBarcelona+74 more
Headout
About UsHelpCareersTravel BlogCompany BlogCreator Partnerships
Partners
Join HeadoutSupply Partner HubAffiliates
© Headout Inc
Privacy PolicyTerms of Usage