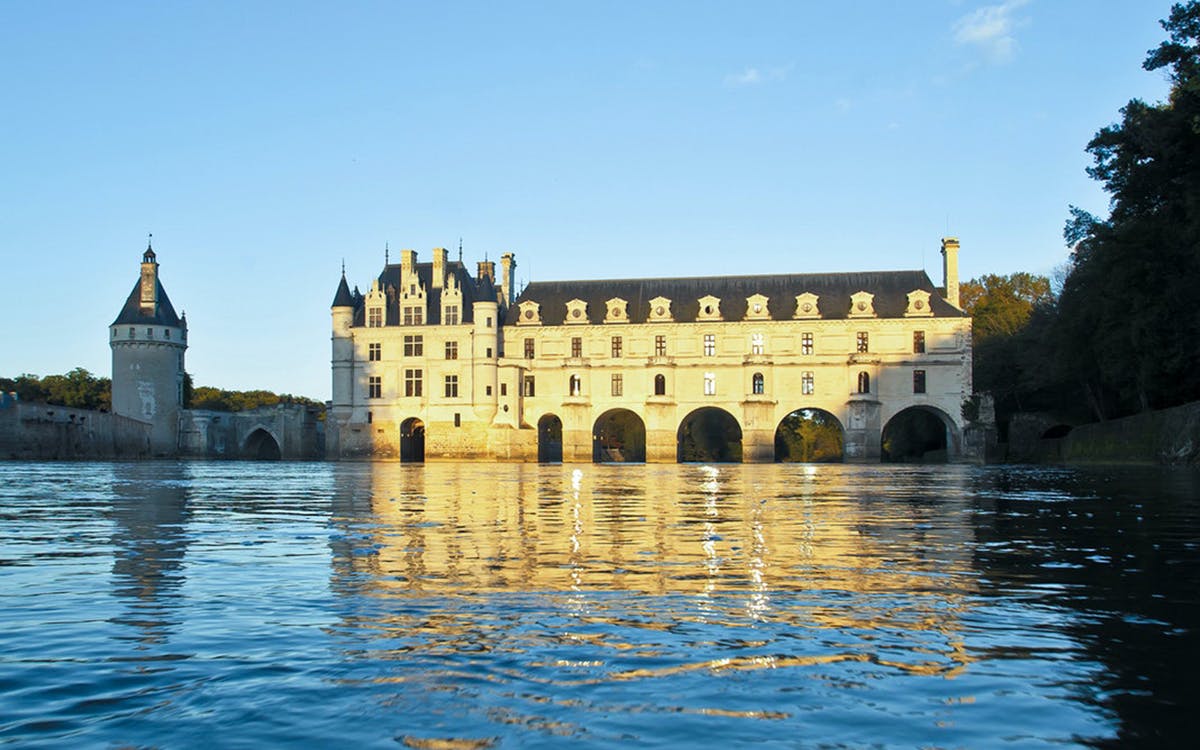 Explore three majestic Loire Valley castles (while skipping all the long queues outside) with this single, money-saving ticket.

Picture an elegant white castle built on the piers of an old mill in the Loire Valley region. That is what the Chenonceau castle is in real life! Often referred to as the “Ladies’ Château” because of the notorious women who built and maintained it throughout the centuries, Chenonceau boasts a fascinating royal history that dates back to the 13th century. Stroll through the castles’ rooms and admire the exquisite tapestries, paintings, and furniture. See the guard’s room, the Chapel with its stunning stained glass windows, and the royal bedrooms, study, library, and kitchens. The gallery has a magnificent ballroom with 18 floor-to-ceiling windows and a slate-tile floor. Don't miss out on walking through the extensive royal gardens alongside the Cher river, featuring a maze, a 16th-century farm, a carriage gallery, and a vegetable and flower garden.

Burned to the ground by King Louis XI in the 15th century, the castle changed hands from Catherine de Medici to Diane de Poitiers in the 16th century. During your visit, you will get to admire the beautifully furnished rooms, the grand spiral staircase, and several works of art on display. The most impressive feature of the chateau is the stunning view over the Loire from the terraces. Another highlight is the stables. Prince Amédée de Broglie is credited for upgrading it with running water and electric lamps at a time when even the grandest chateau had none. There is also the International Garden Festival that takes place every year. It brings together garden designers from all over the world to use their imagination to create a garden based on the annual theme. In 2021, the theme is “Biomimicry in the Garden”. It is open until 7th Nov 2021.

Visit the Blois Castle, the previous residence of several French kings and an extraordinary representation of French architecture ranging from the 13th to the 17th century. Skip the long ticket lines and gain direct entry to the castle with your priority entry tickets. Prepare to be amazed when you step onto the magnificent courtyard, surrounded by four buildings from 4 different eras: the 13th-century Medieval fortress, the Louis XII Gothic wing (1498-1500), the François Renaissance wing (1515-1518), and the Gaston of Orleans Classical wing (1635-1638). Don't miss out on visiting the Fine Arts Museum, housing more than 300 remarkable artworks, including works by the famous artists Jean-Auguste-Dominique Ingres, Peter Paul Rubens, and Francois Boucher. This is paired with simultaneous translation via an audio guide in 10 languages (they are disinfected after every use).

Infants under 6 can go for free. Children aged 6-17 enjoy reduced-price tickets (carry a valid photo ID). Visitors with disabilities will be admitted free of charge.