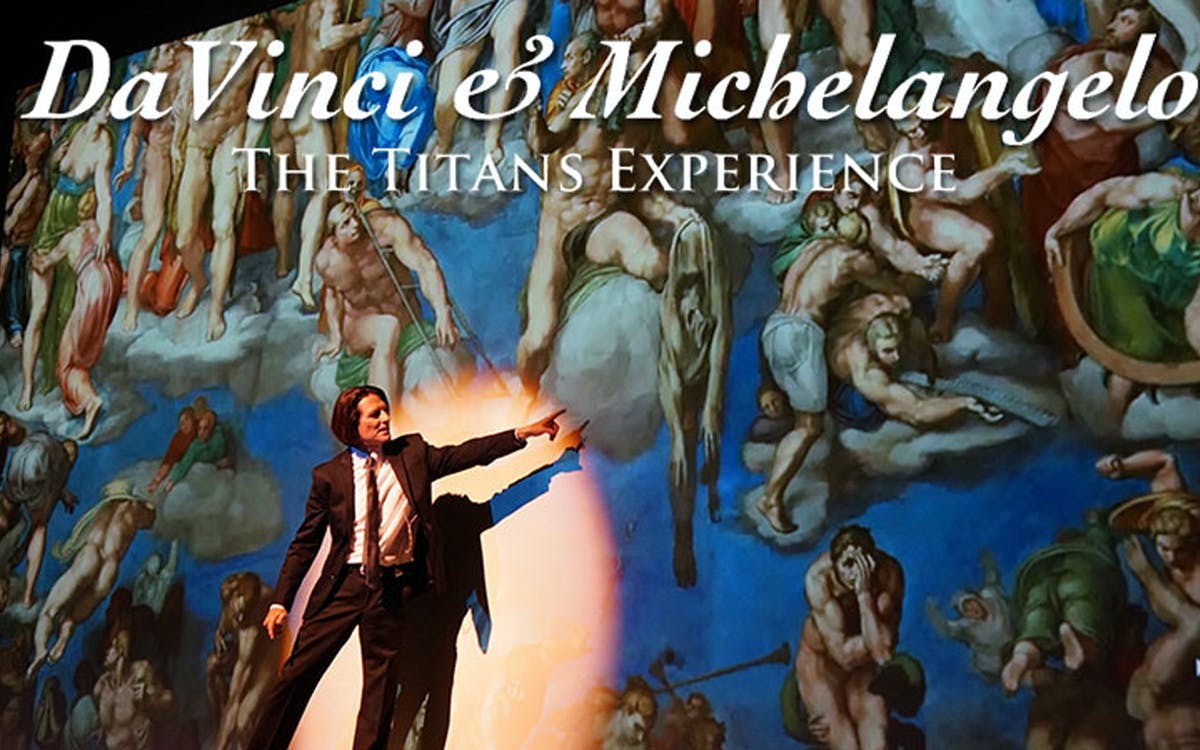 DaVinci and Michelangelo: The Titans Experience

Revel in an unforgettable journey through the Renaissance, as you relive the most exceptional artistic period in history. Join Mark Rodgers, as his one-man show is all set to awe and inspire you! Learn and understand why Da Vinci and Michelangelo are considered to be the two foremost artists of the Renaissance!

why watch davinci and michelangelo: the titans experience

Leonardo da Vinci was a polymath during the Renaissance and is widely considered one of the greatest artists of all time. Despite having just 15 paintings that have survived, his work includes the most popular portrait ever made, the Mona Lisa, and the most reproduced religious painting, The Last Supper. He was also an expert in the fields of engineering, mathematics and astronomy, and has been hailed as a ‘Universal Genius’ owing to his influence across disciplines. Michelangelo was an Italian artist, sculptor, and poet of the Renaissance and one of the greatest artists of all time. Numerous works of his rank as some of the most famous in existence today, and he is one of the best documented artists of the 16th century. His most famous works include the frescoes on the ceiling of the Sistine Chapel and The Last Judgment on the altar. Often called ‘the divine one,’ Michelangelo’s style was extremely influential and even inspired future art movements of the Renaissance. The show is presented by Mark Rodgers, director of the DaVinci Machines and Michelangelo Exhibitions for North America. Rodgers is also the producer, writer, and headliner for the stage show that is guaranteed to enrapture audiences from across the world at Broadway. What started as just a tour for DaVinci has now evolved into a full-fledged show that includes Michelangelo, as he gives incredible insight into the life and work of the two monumental artists of the Renaissance. With shows across the United States, Europe, Australia and China, Rodgers has clearly distinguished his show as one of the very best on DaVinci and Michelangelo!

The show delves into Leonardo da Vinci and Michelangelo’s greatest works and goes into detail about their inspirations and the work that was put in to create the masterpieces. Mark Rodgers’ presentation is powerful and passionate, and it is easy to see that he has put in an incredible amount of effort and time into this endeavor. The presentation includes 3D animations of the various da Vinci inventions, along with images and movies of his sculptures, codices and artwork of both the artists. Rodgers’ energy and passion are infectious, and you will quickly find yourself reeled into his world.

Date Night | Fans of the Renaissance | Lovers of Art

“In this "tour de force" performance..."DaVinci & Michelangelo The Titans Experience, Mark Rodgers will take the audience on a fantastic, awe-inspiring journey through the Italian Renaissance as seen through the eyes of these two, monumental geniuses. “ - Broadway World

"The Titans Experience is an inspiringly, original production. We had an incredible experience being a part of the performance at The Pabst Theater. A multimedia event for the entire family." - Pabst Theater – Milwaukee, WI

Duration
The duration of the play is approximately 2 hours including an interval.

Authored By
Mark and John Rodgers

Seating
The St. Luke Theatre has a seating capacity of nearly 174.