Enjoy a wonderful tour of Barcelona on one of the most fun modes of travel - a bicycle. This tour is perfect if you’re exploring Barcelona alone or in a group. On this tour, you will visit most of the important Barcelona landmarks and get oriented with the true highlights of the city. Later on in the day, the tour will stop to relax at a beach bar where you will have the chance to mingle with fellow riders and enjoy beautiful sights of the Mediterranean.

This Barcelona city tour on a bike is one of the best ways to explore the city. The roads and the Mediterranean winds make this an extremely pleasant experience. On this tour, you will cover some of the most important historic and cultural landmarks of the city. Cycling around Barcelona is the perfect way to get oriented with the city. You can take things at your pace and enjoy your time at each landmark without having to hurry or get tired walking.

Some of the important landmarks that you will be visiting on this bike tour of Barcelona will be Plaça del Rei, La Catedral, La Sagrada Familia, Parc de la Ciutadella, Palau de la Mùsica Catalana and Plaça Sant Jaume, where your tour will begin. The tour finally comes to a relaxed end at a typical Barcelona beach bar where you will get the chance to unwind, mingle with fellow riders in your group and enjoy beautiful sights of the Mediterranean Sea.

You will then be cycling to Plaça del Rei, a 14th-century medieval public square in the older parts of Barcelona in Barri Gòtic. This Gothic construction exemplifies Barcelona’s medieval past in the best way. Not far from Plaça del Rei is La Catedral, a beautiful Gothic church that is the seat of the Archbishop of Barcelona, Spain. The site at which La Catedral is situated has had a church since the 4th century. La Catedral is one of the most beautiful churches in Spain.

After exploring La Catedral, you will head to Palau de la Mùsica Catalana, a concert hall in Barcelona that was designed by modernista architect Lluís Domènech i Montaner. He was also the man behind the equally beautiful Hospital de Sant Pau, both of which now make up a UNESCO World Heritage Site. After seeing the beauty of Palau de la Mùsica Catalana, the tour will head towards the famous Sagrada Familia.

The Sagrada Familia is an Art Nouveau and Catalan Modernisme masterpiece. Under construction since 1882, the ‘soon’ to be completed basilica is one of the finest works of architecture seen in the past century. It is a sight to behold and will undoubtedly be the highlight of your trip. After you have soaked this beautiful monument in, you will head to Parc de la Ciutadella.

Situated on the northeastern edge of Ciutat Vella, Parc de la Ciutadella is a beautifully idyllic park and the densest patch of green in the city. The relaxing atmosphere will make you get down from your bike and take a pleasant walk surrounded by a beautiful lake and lush greenery. The tour will finally end at a local beach bar where you will be able to unwind next to the Mediterranean and mingle with your fellow riders from the day.

The meeting point for this bike tour is Plaça Sant Jaume in the city center. The exact point is at the southwest corner of the plaza, nearest to C. Ferran. The nearest metro stations are Liceu (Line 3) and Jaume I (Line 4).

• You will receive your Barcelona Bike tour voucher in a few minutes.
• On the day of the experience, visit the meeting point and display the tickets on your mobile device at the venue with a valid Photo I.D.
• The exact point is at the southwest corner of the Plaza Sant Jaume, next to C. Ferran.
• Hop on to your bike and head for your wonderful tour of these Catalan landmarks. 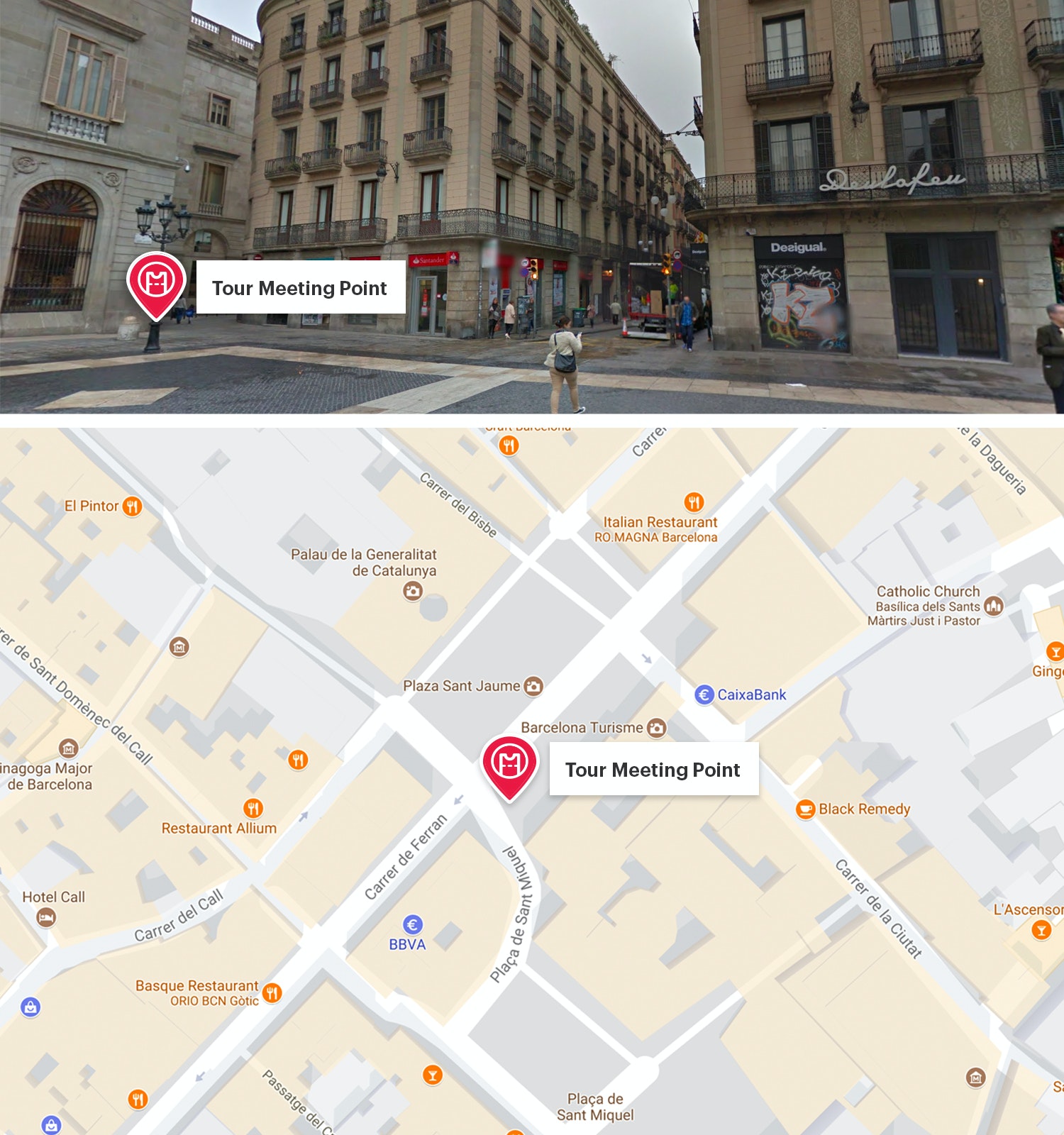 Meeting Point
Southwest corner of the Plaza Sant Jaume, next to C. Ferran.

How to Find
Head to Plaza Sant Jaume. The meeting point will be close to Carrer de Ferran.

Other experiences similar to Barcelona City Tour by Bike