Truly experience the best of Barcelona with this exceptional full day tour of the city that will take you through all the important landmarks that make Barcelona the treasure that it is, not to mention giving you access to Antoni Gaudi's masterpiece in progress, the Basilica of Sagrada Familia!

Why You Shouldn't Miss

This 8-hour tour of Barcelona is one of the most comprehensive tours of the Catalan city. Not only will you be visiting some of the most historic landmarks in the city, but will also receive priority access to the most important highlight of Barcelona - The Sagrada Familia. The tour will also take you through the heart of the city to other popular Art Nouveau centres in the city such as Catalunya National Art Museum, Park Guell, Hospital de Sant Pau Casa Batlló. You will also be driving through Passeig de Gracia, Barcelona’s shopping district as you visit La Pedrera and Casa Batlló.

The tour will also take you to other historic landmarks in Barcelona such as Montjüic Hill, the Jewish Quarter, the Royal Palace, the original 2000-year-old Roman Temple that is now part of the Cathedral and Santa Maria del Mar church. You will stop for lunch at traditional Catalan restaurants and tapas bars where you will be able to enjoy the local delicacies to your heart’s content.

However, the highlight of the trip will surely be the Sagrada Familia. Not only will you get to view this popular Barcelona landmark, but also get skip the line access so that you can enter the basilica without wasting your time in the ticket line. You will be accompanied by a guide as well through the entire leg of the journey making this highlights tour not only an enjoyable experience but a knowledgeable one as well.

Your 8-hour tour of Barcelona will begin with a drive to Montjüic Hill which offers excellent views of the city. The Montjüic Hill was also the site of the 1992 Barcelona Olympics. After a stop at Montjüic Hill, you will briefly visit the Catalunya National Art Museum (MNAC) and then make your way down to Plaça Espanya and drive past Modernist buildings of the Eixample area, Barcelona's modernist centre. From here, you will be going to the Sagrada Familia as you drive past Passeig de Gracia, Barcelona’s famous shopping street, and home to two buildings designed by popular Catalan architect, Antoni Gaudi: La Pedrera and Casa Batlló.

Before you arrive at the Sagrada Familia, you will stop at the Hospital de Sant Pau, the largest art nouveau site in the world and a UNESCO World Heritage Site. The tour will then head to the oldest part of Barcelona, the Barrio Gótico, a region which was surrounded by medieval walls as late as the mid-19th century. Here, you will stop for a brief tour of Mercat de Santa Caterina, Barcelona's traditional indoor food market. The tour will then head to the oldest parts of Barcelona with 2000-year-old Roman Temple ruins, Jewish Quarters and the Royal Palace.

After Barrio Gotico, you will head towards the Born district where you will be able to stop for a brief lunch at one of the many traditional Catalan restaurants and tapas bars. You will also get to visit the magnificent Santa Maria del Mar Church - one of the most beautiful churches in Barcelona. After a quick lunch, you will be taken to Park Güell, a popular urban park and garden that was designed by none other than Antoni Gaudi. Your guide will lead you through the park and introduce you to some of Gaudí's most eccentric creations that make the park one of the most unique urban spaces in the world.

Finally, the tour will end at another famous Gaudí building, La Pedrera. Here, you will be able to spend an hour exploring the interiors of the house. Again, like the Sagrada Familia, you will have skip the line priority access to the landmark. The Barcelona highlights tour will finally end here at around 4:00 PM.

Getting There:
The tour begins at Carrer del Palau de la Música. The closest metro station to this point is Urquinaona on Lines L1 and L4.

• You will receive your Best of Barcelona voucher in a few minutes.
• Print the voucher before you visit the designated meeting point.
• The meeting point for this tour is Explore Catalunya office, C/ Palau de la Música, 4-6, next to the Palau de la Música Catalana.
• Display the printed voucher and begin your tour. 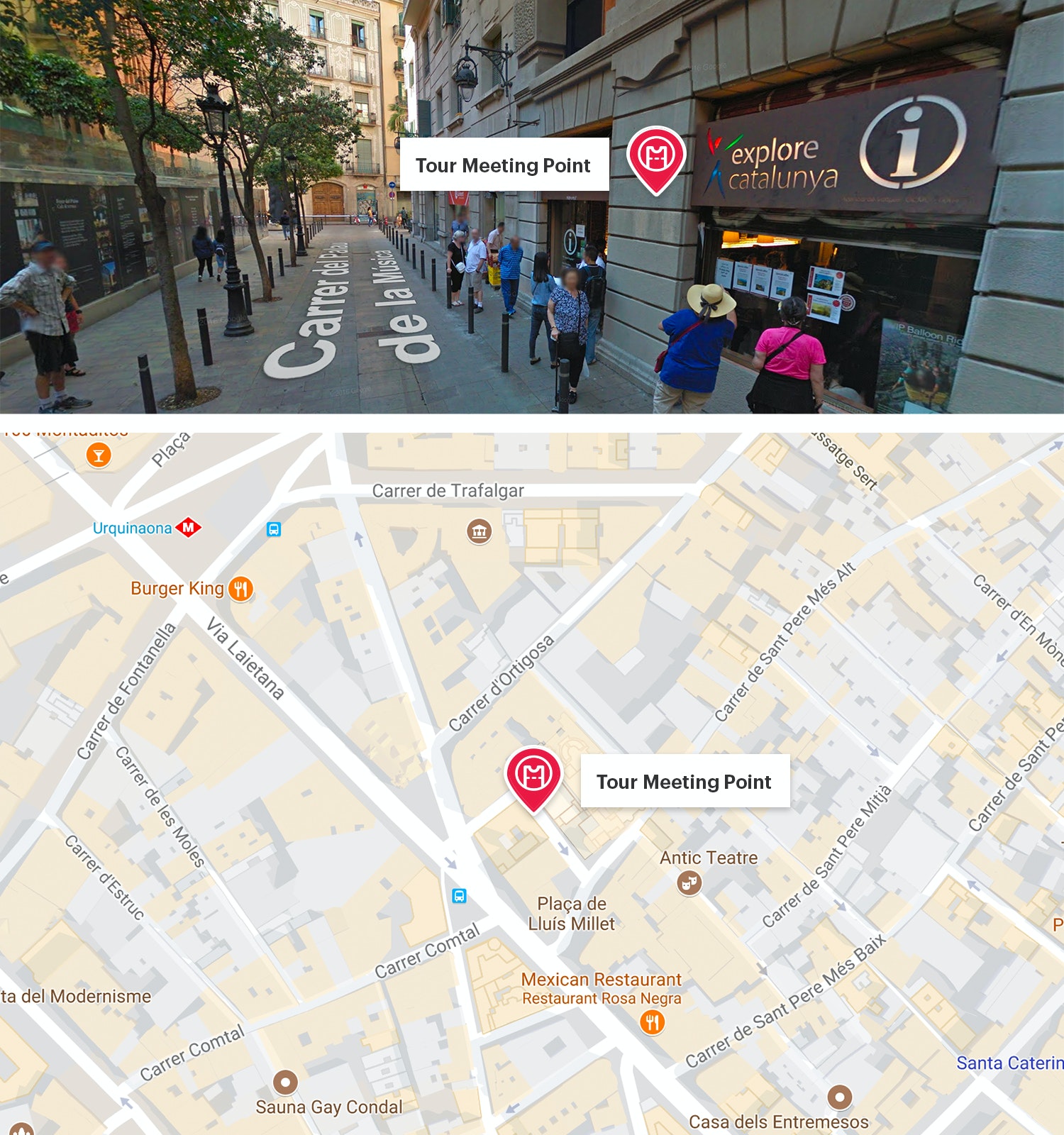