Tour the exquisite Palace as Baroque musicians and dancers help bring your visit to life with a Royal Serenade, followed by an enchanting stroll through the fairy-tale landscape of the Versailles's gardens against a backdrop of water, music, and lights.

Why You Shouldn’t Miss This

The exquisite Palace of Versailles is one of the most extraordinary achievements in 17th century European art. Situated just 30 minutes outside Paris, in the village of Versailles, this elaborate complex once thrived as an epicenter of political power for the Kingdom of France.

Today, the Palace, also known as Château de Versailles, contains 700 rooms spread across 800 hectares. Illustrating more than five centuries of French history, the Palace not only houses remarkable works of art - it stands as a work of art itself. One of the most ornately designed rooms of all, the Hall of Mirrors features 357 mirrors, including seventeen mirror-clad arches that reflect the seventeen arcaded windows overlooking the gardens. The Versailles Palace Gardens span an impressive 250 acres, and continue to thrive as a beautifully manicured plot with 400 sculptures and 1,400 fountains.

Each year, it is estimated that approximately 5 million people visit the Palace of Versailles, and between 8 and 10 million people walks its gardens. A place of immense beauty, Versailles stands as a symbol of France’s monarchy and its glorious history.

Set off from your central Paris meeting point at 6 pm for a magical evening at the Palace of Versailles and its gardens. Your tour begins at 7:45PM with an hour-long visit to the Palace of Versailles, where Baroque musicians and dancers help bring your visit to life with a Royal Serenade. Be transported back to the 17th Century, as you observe commonplace scenes such as the Dressing Ceremony and the Court Ball. Next tour the King's Apartments.

After enjoying the your tour of the Castle, the Night-time Fountain Extravaganza (Grandes Eaux Nocturnes) will begin. Every Saturday night during Summer, the Palace of Versailles stages a magical visual and musical display in its magnificent gardens. Marvel at this incredible show as the gardens dazzles with amazing water effects and astonishing plays of light. Your unique evening will come to a close with the amazing firework display over the Grand Canal, set to masterpieces of French Baroque music by Reinhard Goebel and his Musica Antiqua Köln orchestra.

Departure from Versailles is scheduled for 11:45 pm, with arrival back in Paris at around 12:30 am. The coach will make the following stops in Paris to drop off customers: Place de l'Etoile Square, the Opera House, and Châtelet. For tips on how to navigate the palace, make the most of your time, and choose the best experience, refer to our Palace of Versailles tours and tickets collection.

Everyday, except Mondays, the Palace opens at 9 am and closes at 6:30 pm. Last entry is at 6 pm. The Trianon Estate and the Carrosses Gallery open in the afternoon, at 12 pm and 12:30 pm respectively. Both close at 6:30 pm. The Gardens open at 8 am and the Park at 7 am; both close at 8:30 pm. (Hours are subject to change during severe weather conditions.) The entire premise of the Palace of Versailles closes each year on May 1st.

You will travel from Paris to Versailles in a luxury air-conditioned coach. The journey takes approximately 45 minutes.

The Versailles Evening Guided Tour & Night-Time Fountain Show is available only on Saturdays. The tour begins at 6 pm. You will return to Paris at 12:30 am.

If you’d like to tour the palace on an all-day VIP excurision with access to parts of the palace not open to the general public, check out our Versailles VIP Guided Tour from Paris ticket.

• Upon confirmation of your booking, you will receive your voucher in a separate email.
• On the day of your Versailles experience, display your voucher via mobile phone at the tour’s meeting point located at 2 rue des Pyramides 75001, Paris.
• Your tour guide will give you your skip-the-line voucher and facilitate transport to Paris.
• Upon arrival, your guide will escort you to the entrance of the palace. Bypass the entry line and make your way through security to begin your tour.
• Please arrive at the meeting point in Paris no later than 15 minutes before your scheduled departure time. 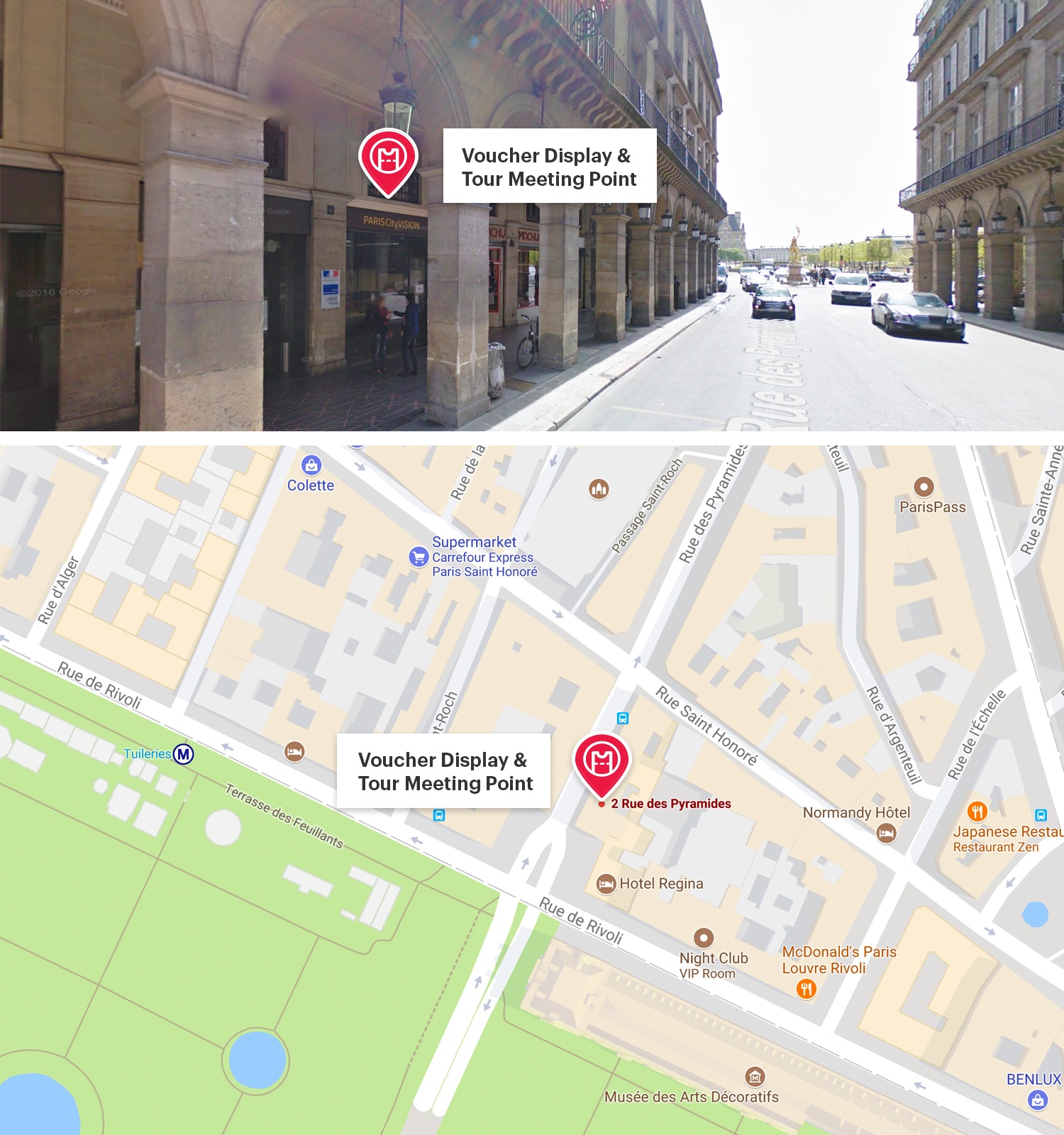 Validity
Your Versailles Evening Guided Tour & Night-Time Fountain Show will start at 6 pm and finish at approximately 11:15 pm. Departure from Versailles is scheduled for 11:45 pm, with arrival back in Paris at around 12:30 am. The coach will make the following stops in Paris to drop off customers: Place de l'Etoile Square, the Opera House, and Châtelet.