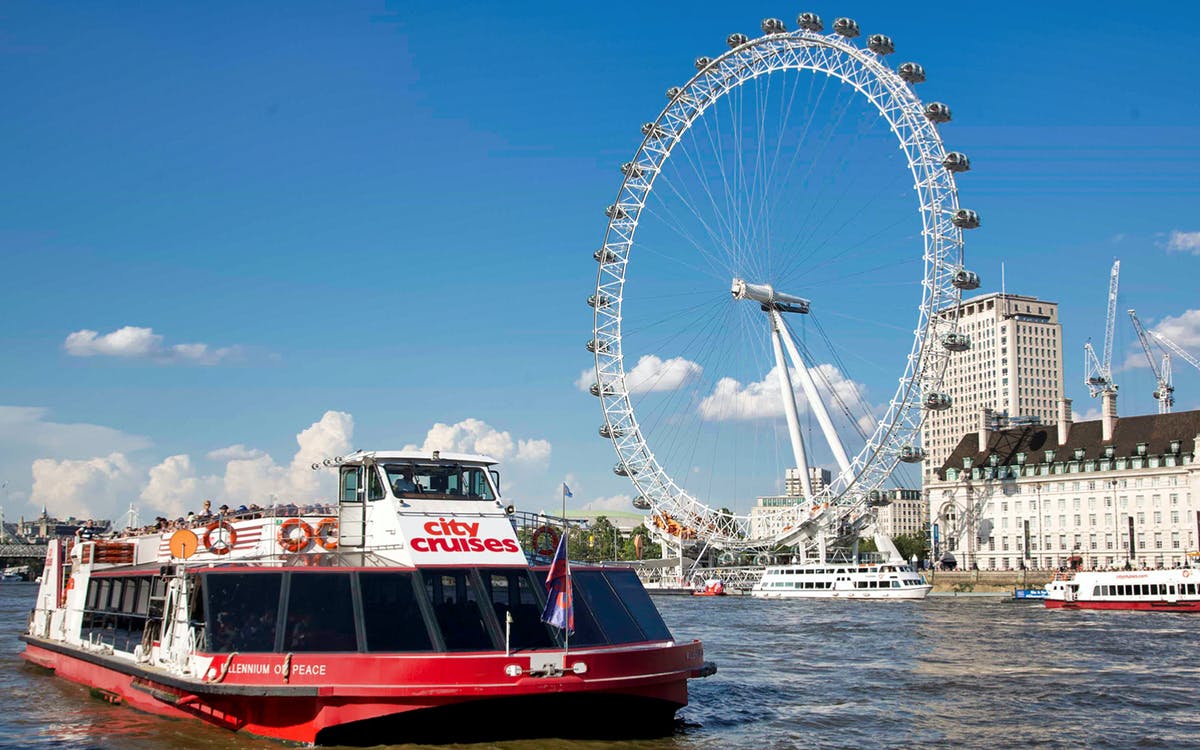 Enjoy an unlimited Hop-On Hop-Off cruise experience on the River Thames! Cruise on the calm waters and take in the London’s splendor and glory and revel in the magic of its attractions. With multiple stops from where you can Hop-On Hop-Off, you’re going to love seeing the city from the water. A rather refreshing perspective on a city otherwise infamous for ‘gloomy weather’, the Thames banks add to the charm by showcasing a vast repertoire of London’s most popular attraction. Sit back and relax as you take in the city’s iconic monuments, the buzzing traffic and its people from the comfort of a relaxing cruise. Cruising London has never seen this scenic!

A scenic day touring London by boat, might be simple enough to describe your experience, but that does not do justice to what you’ll actually be experiencing. Relax and enjoy panoramic vistas of River Thames and its incredible banks as you go on sightseeing tour of London’s top riverside attractions.

What’s more, the sightseeing vessels feature a live commentary onboard which is fully equipped to handle multilingual commentary in six different languages. You can lounge on the open-deck or relax in the comfortable cabin indoors, and with either option your stunning views are guaranteed.

However, the standout of this ticket is the freedom it gives you to explore the city at your own place. With unlimited Hop-on Hop-off across select stations on Thames, you can take in the city’s riverside attractions one at a time, without having to worry about transport. Additionally, you can even indulge in the bar on board to add a certain sense of excitement and adventure to your day.

Tower of London: - Tower Pier/St.Katharine Pier A historic castle located on the north bank of Thames, the Tower of London was built in 1078 AD by William the Conqueror. Steeped in the history of the British royal family, you’ll be able to view the Crown Jewels, Visit the Bloody Tower and learn secrets about London’s bloody royal past.

London Eye - Westminster Pier London’s most recognizable site on the banks of the Thames, London Eye is a must-see attraction in the city. Known for its panoramic views of the cityscape with breathtaking sights of St. James Park, Buckingham Palace and more, the London Eye is the world’s highest observation wheel. Be sure to visit this on your tour of London!

Shakespeare’s Globe: - Bankside Pier A complex housing a reconstruction of the fabled Globe Theatre, Shakespeare’s Globe is an attraction which oozes charm. Visit the reconstructed theatre on the Bankside and learn all about the art of staging a play. If you plan your visit right, you can even enjoy a themed afternoon tea at the venue.

Oxo Tower - Embankment Pier A prominent tower on the south bank of River Thames, Oxo Tower is famous for its Art Deco design. Today the tower hosts a famous gallery known for its collection of photographs, design and architecture, along with a series of design, arts and crafts shops. A continuous riverside walkway passed in front of the building, linking it to Festival Hall, National Theatre, Tate Modern and Globe Theatre.

Ticket Variants
In the next step of the booking, you will be able to choose between a 24 and 72 hour time frame during which you will have unlimited use of the sightseeing service.

Audio Guide
By downloading the official in:flow app on your mobile phone, you can turn your phone into an audioguide! The app uses GPS to follow your route and gives you incredible insight and facts about the river, stories about the iconic landmarks you'll get to admire on your way, as well as promotions on dining and viewing attractions based on your current location!

Boat Names
You can board any of the three boats listed ahead: Sapele, Mercuria and Sarah Kathleen.

Accessibility
All boats are accessible via a wheelchair.

Validity
Your Hop-On Hop-Off Cruise ticket is valid for the time frame selected in the next step of the booking.

How To Use Your Ticket

You will receive an email with your Hop-on Hop-off Cruise ticket voucher shortly. Please take a print of this. We know it sucks, we’re trying to get this changed soon.

After you’ve taken the print, you can proceed to any of the piers mentioned below and show your ticket and the ticketing kiosk. Exchange your printed voucher for the actual ticket at any time between 9 AM and 5 PM, and enjoy your Hop-on Hop-off Cruise experience.

Audio Guide
By downloading the official in:flow app on your mobile phone, you can turn your phone into an audioguide! The app uses GPS to follow your route and gives you incredible insight and facts about the river, stories about the iconic landmarks you'll get to admire on your way, as well as promotions on dining and viewing attractions based on your current location!