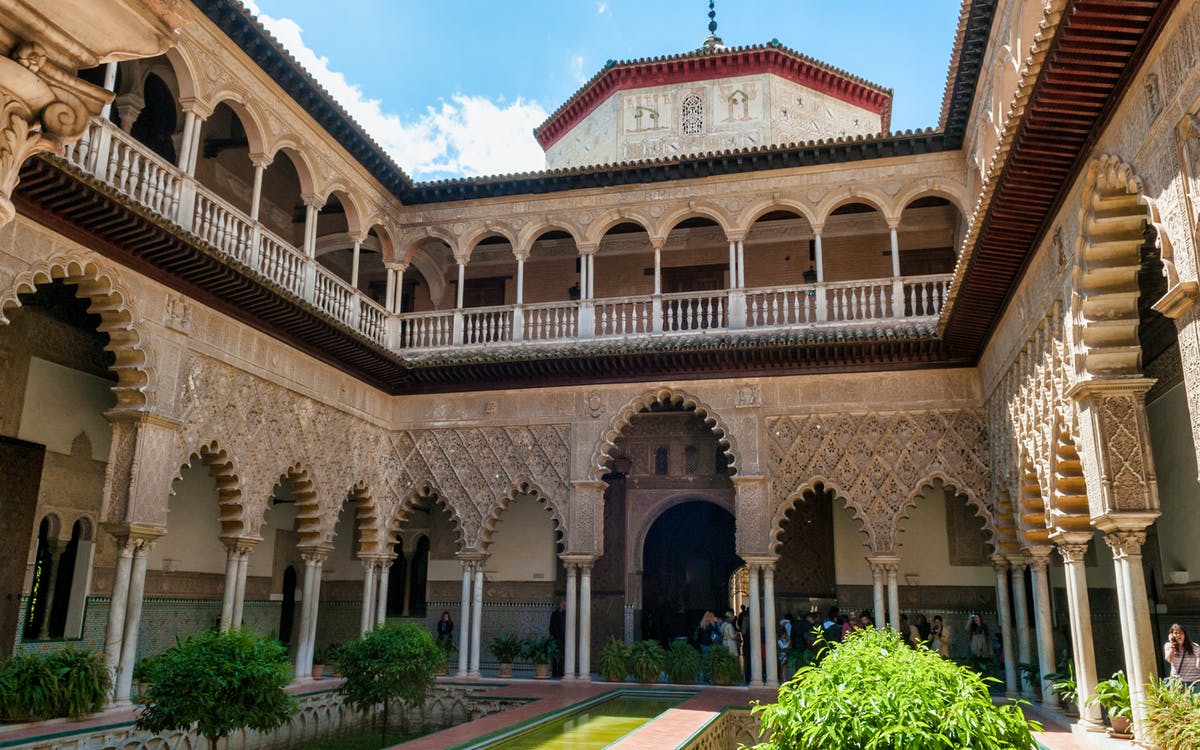 Skip the lines and get easy access to the Alcazar Palace in Seville. Pass by the Lion’s Gate, the Courtyard of Maidens, and the Hall of Ambassadors. Marvel at the royal gardens and admire the beautiful artworks depicting the Spanish conquest of the South American continent.

Go on a guided tour to explore the Alcazar Palace in Seville, the location for many episodes of the hit HBO TV Series, “Game of Thrones”.

Skip-the-line Entry, the Mudéjar Palace, and the Lion’s Gate

Explore the Alcazar Palace, a UNESCO World Heritage Site with skip-the-line access. In the past, this palace has seen the rule of many dynasties starting from the Nasrids to the Christians. Now, it is one of the most visited attractions of Seville.

The Lion’s Gate (Puerta del León) at the entrance of the palace has a Gothic tile depicting a crowned lion with a cross in hand.

Of Maidens and Ambassadors

Walk through the Courtyard of Maidens (Patio de las Doncellas), which was temporarily paved with white marble at the request of director Ridley Scott, for the movie the “Kingdom of Heaven”. Follow it up with a visit to the “Hall of Ambassadors” (Salon de Embajadores), the main room of King Peter of Castille.

The Historical Artworks and the Gardens

The Alcazar Palace houses a unique collection of artworks depicting the Spanish conquest of the South American continent. These artworks include “The Virgin of the Navigators” and “Azulejo”. After that, make your way to the lush green gardens of Alcazar and bask in its splendor.

This ticket offers the following options you can choose from:

Missing any information?
Yes
No
This experience is unavailable
You'll be the first to know when these tickets are back online.
notify me
Awesome!We will notify you.
Why Headout?
Trusted platform used by 100K+ people, each month
Get the lowest prices and last minute availability
Discover and connect with 10,000+ experiences
Browse verified reviews and professional photographs
Have a question? Live chat with our experts 24/7
Other experiences similar to Guided Alcazar Seville Tour with Skip the Line Access
Landmarks
Alcázar Seville Skip the Line Tickets
Instant Confirmation
4.3
(4.3K)
€14.50
Landmarks
Fast Track Tickets to Seville Cathedral, Giralda & Salvador
Instant Confirmation
4.3
(2K)
€12
Guided Tours
Seville's Alcázar, Cathedral and Giralda Guided Tour
Instant Confirmation
4.4
(1.2K)
from €44.63
Guided Tours
Skip the Line Guided Tour of Royal Alcázar of Seville
4.5
(1.4K)
from €28.10
Guided Tours
Seville Cathedral & Giralda: Skip the Line Guided Tour
Instant Confirmation
4.4
(903)
from €24.79
The world on your tap!Get the Headout app to get tickets on your phone and access app-only deals. Talk about win-win.
We've served 15 million+ guests and we are here for you
15 million +Happy customers across 10,000+ experiences
4.4/55,000+ verified reviews with 90% excellent score
In the MediaFeatured and recommended by the best brands
24 x 7 Help CenterHave a question? Live chat with local experts anywhere, anytime
Headout is building the future of how we experience our cities.
Made with ❤️ all over the 🌎
Headout Inc.
82 Nassau St #60351 New York, NY 10038
Cities
New YorkLas VegasRomeParisLondonDubaiBarcelona+63 more
Headout
About UsHelpCareersTravel BlogCompany BlogCreator Partnerships
Partners
Join HeadoutSupply Partner HubAffiliates
© Headout Inc
Privacy PolicyTerms of Usage