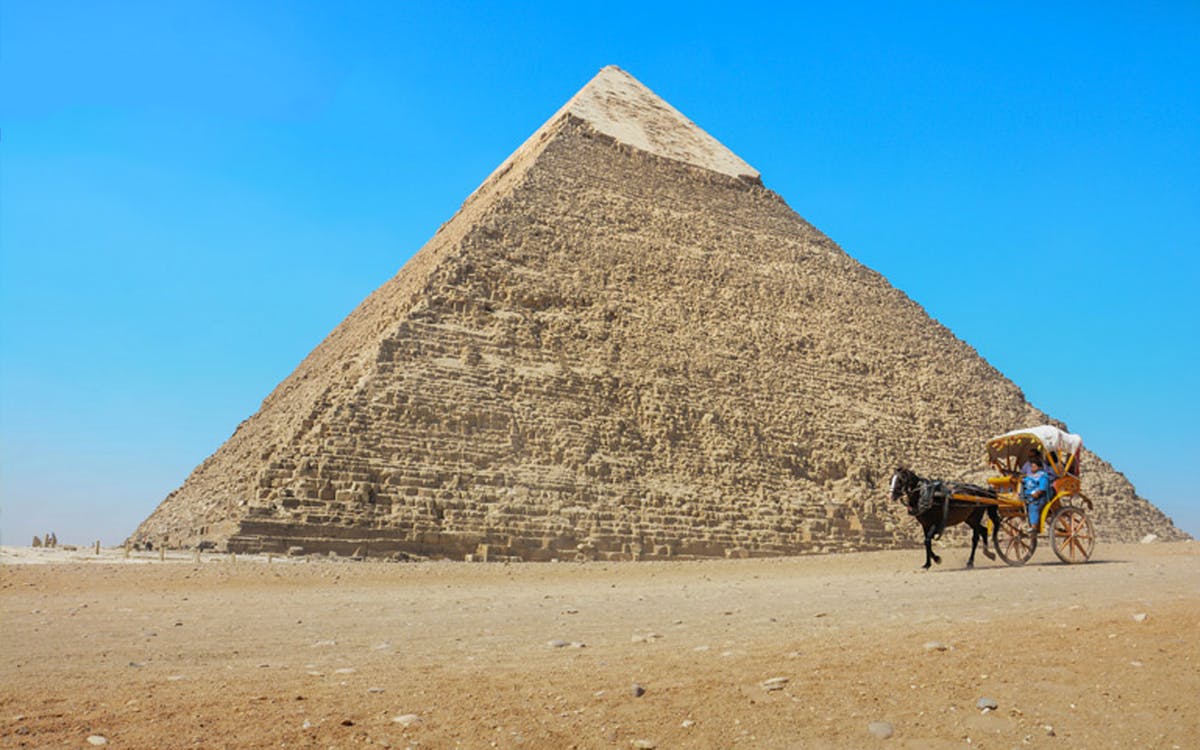 After your hotel pick-up at 8:00 AM, your first stop is at the Giza pyramid complex. This is where you can see the Pyramids of Cheops, the oldest and only survivor of the Seven Ancient Wonders of the World. Located next to it are the smaller Pyramids of Chephren, and Mykerinos, as well as the Great Sphinx on the east. All of these were built during the golden age of the Old Kingdom of Egypt.

The tour also includes a visit to the Valley Temple, which was used for the purification of the king's mummy, as well as the mummification process before his burial. Continue onwards to the Step Pyramids of Zoser, the world’s oldest major stone structure. It was built 4,700 years ago for King Djoser. The Step Pyramid of Saqqara is considered an evolution in the concept of pyramids, from the simple mastaba to their final form now. The pyramid is 60 meters tall and consists of 6 steps on top of each other, with each one being smaller than the one below.

Your last stop for the day is at Memphis, which was founded by King Menes. It was the capital of Old Egypt during the Old Kingdom and was a center of culture for over 3,000 years. It was known as Men-nefer ("the enduring and beautiful"), which was translated as 'Memphis,' by the Greeks.

Missing any information?
Yes
No
This experience is unavailable
You'll be the first to know when these tickets are back online.
notify me
Awesome!We will notify you.
Why Headout?
Trusted platform used by 100K+ people, each month
Get the lowest prices and last minute availability
Discover and connect with 10,000+ experiences
Browse verified reviews and professional photographs
Have a question? Live chat with our experts 24/7
Other experiences similar to Guided Tour of Giza Pyramids, Memphis and Saqqara
Free Cancellation
Guided Tours
Half Day Tour of Pyramids of Giza, Sphinx
Instant Confirmation
4.1
(734)
$25
Free Cancellation
Guided Tours
Guided Tour of the Egyptian Museum, Pyramids & the Bazaar
Instant Confirmation
4.4
(829)
from $50$45
Save up to 10%
Free Cancellation
Photography Tours
Pyramids, Bazaar and Citadel Tour with Photographer
Instant Confirmation
4.1
(800)
from $72$64.80
Save up to 10%
Free Cancellation
Private Tours
Quad Biking Tour of the Pyramids with Optional Camel Ride
Instant Confirmation
4.3
(869)
from $55$49.50
Save up to 10%
Free Cancellation
Guided Tours
Giza Pyramids, Sphinx, Saqqara, Memphis Tour from Cairo
Instant Confirmation
4.1
(965)
from $53$47.70
Save up to 9%
The world on your tap!Get the Headout app to get tickets on your phone and access app-only deals. Talk about win-win.
We've served 15 million+ guests and we are here for you
15 million +Happy customers across 10,000+ experiences
4.4/55,000+ verified reviews with 90% excellent score
In the MediaFeatured and recommended by the best brands
24 x 7 Help CenterHave a question? Live chat with local experts anywhere, anytime
Headout is building the future of how we experience our cities.
Made with ❤️ all over the 🌎
Headout Inc.
82 Nassau St #60351 New York, NY 10038
Cities
New YorkLas VegasRomeParisLondonDubaiBarcelona+74 more
Headout
About UsHelpCareersTravel BlogCompany BlogCreator Partnerships
Partners
Join HeadoutSupply Partner HubAffiliates
© Headout Inc
Privacy PolicyTerms of Usage