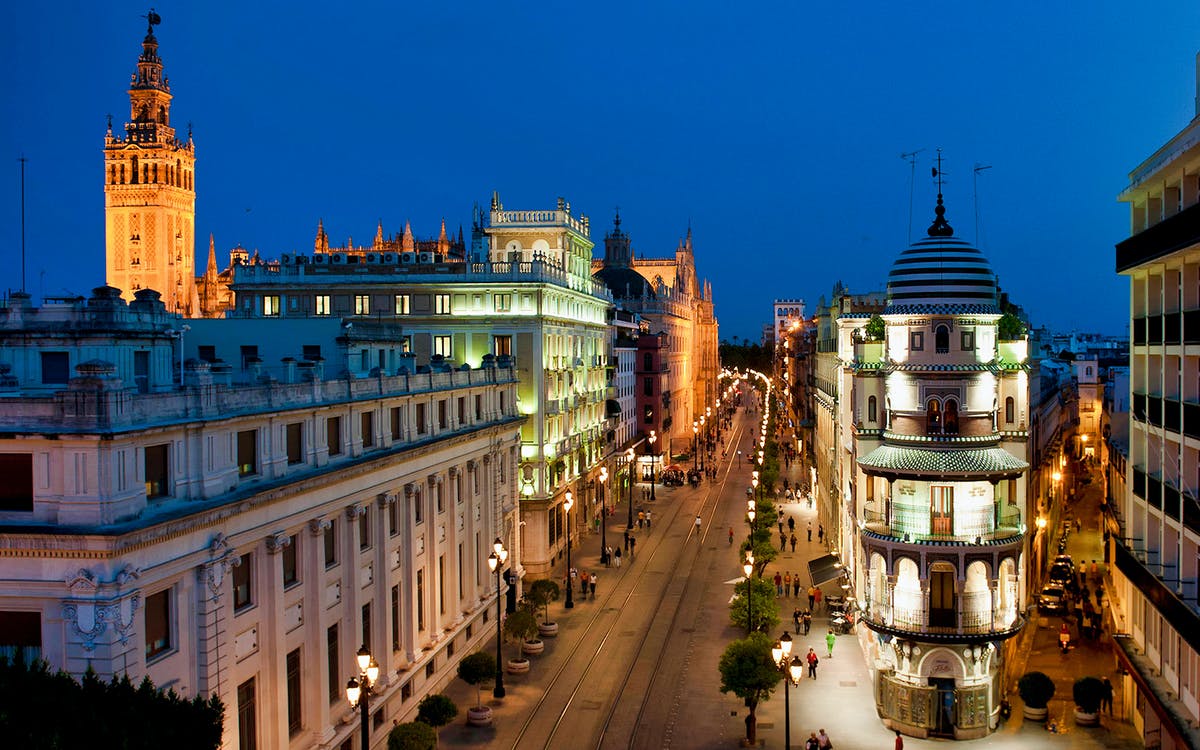 Explore the city center and pass by historic landmarks such as the El Arenal and the Triana neighborhood. Marvel at the Tower of Gold (Torre Del Oro), which was once a military watchtower. Experience the magic of a traditional Flamenco night in Seville, Spain’s fourth largest city.

Kick start your Seville tour after meeting your bilingual guide at the “Andalsur Excursiones” office. The Andalusian capital is famous for its rich culture, heritage, and history. Walk through the city center, one of the busiest areas of the city. Explore El Arenal, which is believed to have been a port of Seville during the medieval times. Marvel at the Tower of Gold (Torre Del Oro), a 13th-century Moorish watchtower that also served as a prison during the middle ages. Visit the Triana neighborhood, an old quarter in Seville known for its potteries and workshops.

After the tour, head towards a Flamenco show and enjoy the performances by the local artists, while gorging on the delicious tapas for dinner.

This tour is not available on the following dates:

This experience is available at 8:00 PM on the following days:

Get off at Marques de Paradas, it is an 11-minute walk to the meeting point.

Your mobile voucher will be sent to you instantly. Please display this on your mobile device at the meeting point.

Missing any information?
Yes
No
This experience is unavailable
You'll be the first to know when these tickets are back online.
notify me
Awesome!We will notify you.
Why Headout?
Trusted platform used by 100K+ people, each month
Get the lowest prices and last minute availability
Discover and connect with 10,000+ experiences
Browse verified reviews and professional photographs
Have a question? Live chat with our experts 24/7
Other experiences similar to Flamenco night in Seville
Landmarks
Alcázar Seville Skip the Line Tickets
Instant Confirmation
4.3
(4.3K)
€14.50
Landmarks
Fast Track Tickets to Seville Cathedral, Giralda & Salvador
Instant Confirmation
4.3
(2K)
€12
Guided Tours
Seville's Alcázar, Cathedral and Giralda Guided Tour
Instant Confirmation
4.4
(1.2K)
from €44.63
Guided Tours
Skip the Line Guided Tour of Royal Alcázar of Seville
4.5
(1.4K)
from €28.10
Guided Tours
Seville Cathedral & Giralda: Skip the Line Guided Tour
Instant Confirmation
4.4
(902)
from €24.79
The world on your tap!Get the Headout app to get tickets on your phone and access app-only deals. Talk about win-win.
We've served 15 million+ guests and we are here for you
15 million +Happy customers across 10,000+ experiences
4.4/55,000+ verified reviews with 90% excellent score
In the MediaFeatured and recommended by the best brands
24 x 7 Help CenterHave a question? Live chat with local experts anywhere, anytime
Headout is building the future of how we experience our cities.
Made with ❤️ all over the 🌎
Headout Inc.
82 Nassau St #60351 New York, NY 10038
Cities
New YorkLas VegasRomeParisLondonDubaiBarcelona+74 more
Headout
About UsHelpCareersTravel BlogCompany BlogCreator Partnerships
Partners
Join HeadoutSupply Partner HubAffiliates
© Headout Inc
Privacy PolicyTerms of Usage