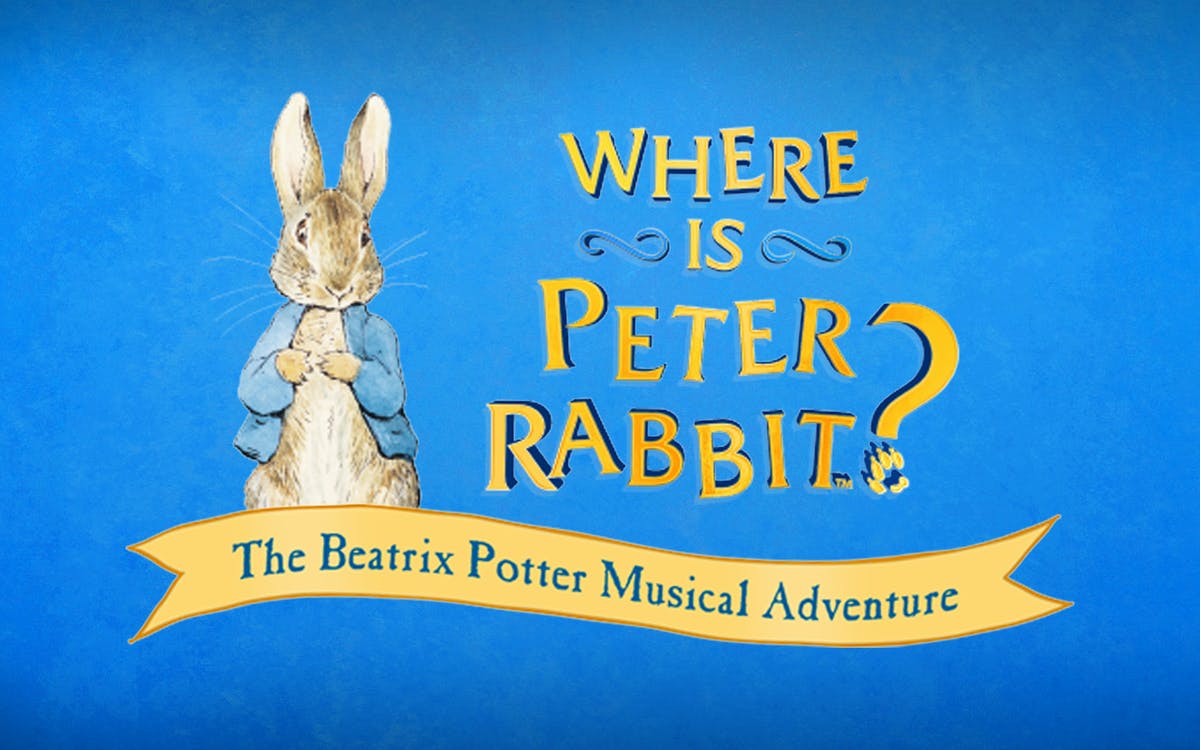 Where is Peter Rabbit? - Tickets

Relive one of the most well-known children's tales, as you are taken into the world of Beatrix Potter's Peter Rabbit! Experience an exciting combination of live performances mixed with recorded sections, something rarely seen on the West End stage!

why watch where is peter rabbit?

First published in 1902, The Tale of Peter Rabbit has enraptured children across all age groups for several generations. Featuring lifelike handcrafted puppets that aptly depict the animal characters of the book, Where is Peter Rabbit is an excellent take on the classic children’s tale. The play features voiceovers from some of the most well-known actors in theatre, including BAFTA Award-winning Miriam Margolyes, of Harry Potter fame and Griff Rhys Jones, am Olivier Award Winner. The music and lyrics have been inspired by the original book and makes for an enchanting original soundtrack and performance. Potter’s books have been inspired as a result of her love for animals and nature. She has numerous pets throughout her childhood, which served as inspiration for her stories. The play combines numerous stories, all centered around animals and serves as an excellent merger of all her famous characters. A combination of live performance, recorded material, and projection make for an unforgettable night at West End!

The story is set in the Lake District of England. Peter Rabbit and his family are constantly on the lookout for food. He is accompanied by Benjamin Bunny and Jemima Puddle-Duck in all his adventurous endeavors. They mostly steal vegetables from the garden of Mr. McGregor, a cruel and wicked man, who attempts to catch the animals. Join Peter Rabbit on his adventures, as he is joined by a multitude of other characters. Mrs. Tiggly Winkle helps everyone with their laundry and ironing, while the friendly Jemima Puddle-Duck always accompanies Peter. Will Peter Rabbit’s luck run out, and will he get caught by Mr. McGregor, who swears to protect his lettuce garden from the pesky animals?

Directed and Choreographed by
Sheila Carter

Audience
-3 years and older.
- Please note that the production is not suitable for children under 3 (in terms of content and to minimise disruption to audience and actors).
- However, if you decide to bring a younger child, you must purchase a ticket for them.

Seating
The Theatre Royal Haymarket has a seating capacity of 889.

Your voucher will be emailed to you shortly.

- Please display the voucher on your mobile phone with a valid photo ID at the theatres 'Box Office' and exchange it for physical tickets.
- We would recommend you to arrive at the theatre at least 30 minutes prior to your show.

Missing any information?
Yes
No
This experience is unavailable
You'll be the first to know when these tickets are back online.
notify me
Awesome!We will notify you.
Why Headout?
Trusted platform used by 100K+ people, each month
Get the lowest prices and last minute availability
Discover and connect with 10,000+ experiences
Browse verified reviews and professional photographs
Have a question? Live chat with our experts 24/7
Other experiences similar to Where is Peter Rabbit?
Landmarks
London Eye Standard Experience Tickets
4.4
(941)
£29.50
Musicals
The Lion King
Instant Confirmation
4.5
(2.1K)
from £30
Free Cancellation
Walking Tours
Warner Bros. Studio Tour London : Navettes aller-retour en autocar climatisé
Instant Confirmation
4.4
(1.3K)
from £94
Musicals
Mamma Mia!
Instant Confirmation
4.5
(1.9K)
from £18
Musicals
Phantom of the Opera
Instant Confirmation
4.5
(1.2K)
from £27
The world on your tap!Get the Headout app to get tickets on your phone and access app-only deals. Talk about win-win.
We've served 10 million+ guests and we are here for you
10 million +Happy customers across 10,000+ experiences
4.4/55,000+ verified reviews with 90% excellent score
In the MediaFeatured and recommended by the best brands
24 x 7 Help CenterHave a question? Live chat with local experts anywhere, anytime
Headout is building the future of how we experience our cities.
Made with ❤️ all over the 🌎
Headout Inc.
82 Nassau St #60351 New York, NY 10038
Cities
New YorkLas VegasRomeParisLondonDubaiBarcelona+63 more
Headout
About UsHelpCareersTravel BlogCompany BlogCreator Partnerships
Partners
Join HeadoutSupply Partner HubAffiliates
© Headout Inc
Privacy PolicyTerms of Usage