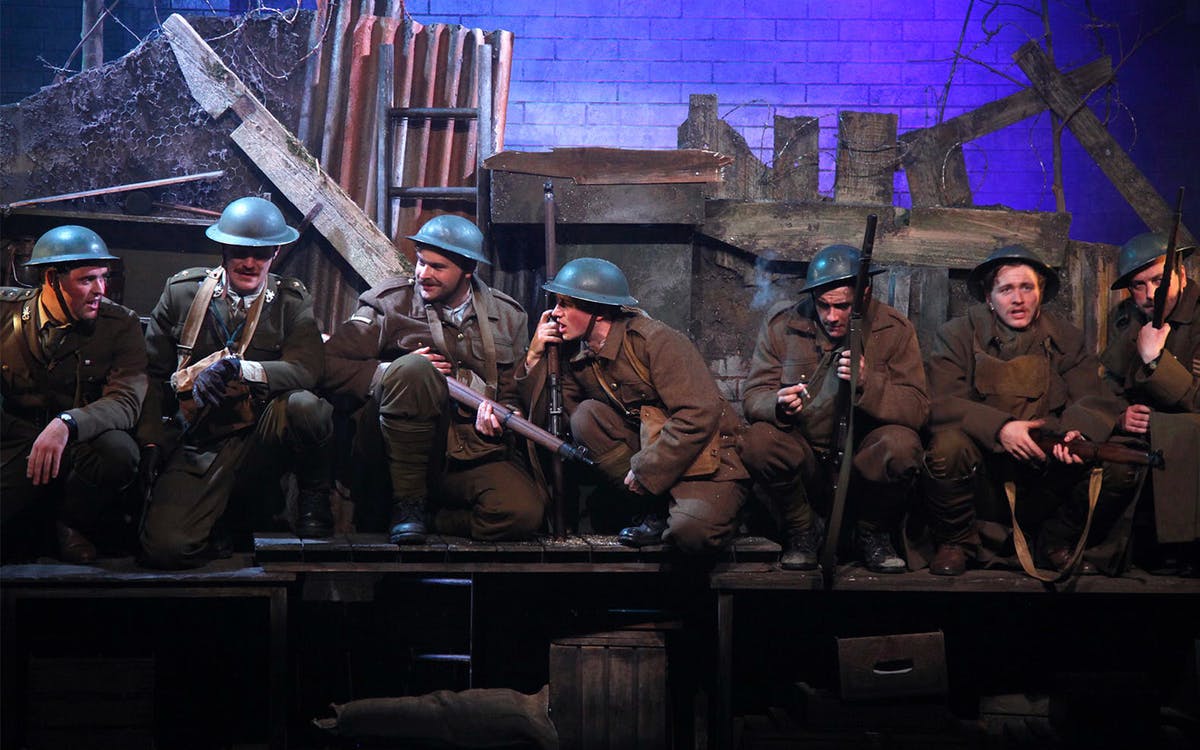 The Wiper Times is an amazing true story of a sardonic newspaper that was created during the fierce battle of the Somme. Watch laughter spread through the British regiment in the Belgian town of Ypres in the bleakest of times.

why watch the wiper times

Succeeding a complete sell-out and a national tour, The Wiper Times returns to West End, ready to take it by storm. The brainchild of Ian Hislop and Nick Newman, this light-hearted play is sure to bring a smile to your face. The play is back to West End for only 7 weeks. This play is the stage version of the award-winning TV film. The Wiper Times expertly balances the horrors of war with the levity brought about by the newspaper company to paint a satirical picture of the pointlessness of war.

The show recounts the astounding true story of a newspaper that was created during the first World War, to mock and parody the state of the war. This cheeky, light-hearted, and sometimes even disruptive paper brought joy and laughter in the worst of times. The Wiper Times tells the world about this newspaper and the brave men behind it. The British soldiers in Ypres may not have known how to pronounce the name of the town they were in, but when they found a printing press, these cheeky troopers knew exactly what had to be done.

“Even – perhaps especially – at its silliest, the play has a respect for its subject matter that is deadly serious and decidedly affecting”
– The Times

Duration
2 hours, 10 minutes including one intermission

Audience
Recommended for ages 12 and above.

Seating
The Arts Theater has a seating capacity of 350.

Missing any information?
Yes
No
This experience is unavailable
You'll be the first to know when these tickets are back online.
notify me
Awesome!We will notify you.
Why Headout?
Trusted platform used by 100K+ people, each month
Get the lowest prices and last minute availability
Discover and connect with 10,000+ experiences
Browse verified reviews and professional photographs
Have a question? Live chat with our experts 24/7
Other experiences similar to The Wipers Times
Musicals
The Lion King
Instant Confirmation
4.5
(2.3K)
from £30
Musicals
Wicked
Instant Confirmation
4.5
(2K)
from £23.40
Musicals
Mamma Mia!
Instant Confirmation
4.5
(2K)
from £24
Musicals
The Book Of Mormon
Instant Confirmation
4.5
(1.7K)
from £30
Musicals
Matilda The Musical
Instant Confirmation
4.5
(1.6K)
from £24
The world on your tap!Get the Headout app to get tickets on your phone and access app-only deals. Talk about win-win.
We've served 15 million+ guests and we are here for you
15 million +Happy customers across 10,000+ experiences
4.4/55,000+ verified reviews with 90% excellent score
In the MediaFeatured and recommended by the best brands
24 x 7 Help CenterHave a question? Live chat with local experts anywhere, anytime
Headout is building the future of how we experience our cities.
Made with ❤️ all over the 🌎
Headout Inc.
82 Nassau St #60351 New York, NY 10038
Cities
New YorkLas VegasRomeParisLondonDubaiBarcelona+63 more
Headout
About UsHelpCareersTravel BlogCompany BlogCreator Partnerships
Partners
Join HeadoutSupply Partner HubAffiliates
© Headout Inc
Privacy PolicyTerms of Usage