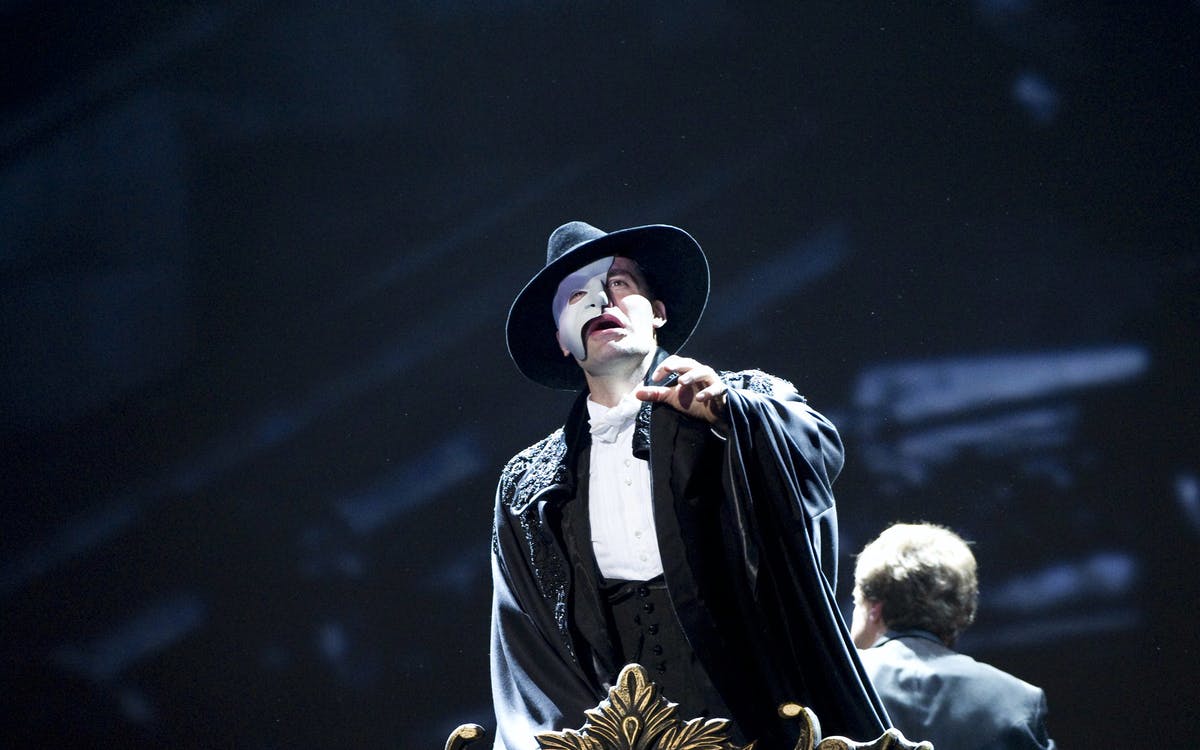 Phantom of the Opera - Tickets

Based on a French novel of the same name by Gaston Leroux, the Phantom of the Opera is one of the longest running West End Shows to date. The central plot revolves around a beautiful soprano who becomes the obsession of a disfigured musical genius.

why watch the phantom of the opera

First performed in 1986, the Phantom of the Opera is one of the most popular and longest-running shows in the world. After its initial performance, it went on to win the 1986 Olivier award and the 1988 Tony award. With a score written by Andrew Lloyd Webber and lyrics by Charles Hart, the musical is a theatre phenomenon that continues to entertain people even today. Its breathtaking set designs and beautiful costumes will delight people who are searching for a performance that evokes a sense of traditional theatrical flair.

The musical is about a talented but obscure chorus singer at the Opera Populaire, Christine Daaé, who captures the heart of a disfigured genius only known as “the opera ghost”. The ghost lives in the sewers beneath the opera house and terrorizes its cast and crew. However, he takes an interest in Christine and begins to train her in singing. Soon, Christine gets reacquainted and eventually falls in love with a childhood friend, Raoul. The phantom is not pleased when he finds out about this and sets out to bring Christine by his side, using whatever means he finds necessary. Will this mysterious “ghost” seduce Christine, or will she choose to be with Raoul?

The venue is kindly asking that all customers bring evidence of a negative test result within 24-48 hours of the show. They are not running a COVID pass scheme – this request applies to all customers regardless of vaccination status.

You will get an email confirmation instantly. Please display the same on your mobile phone with a valid photo ID.

Missing any information?
Yes
No
from
£27
Check Availability
Best price guaranteed
Why Headout?
Trusted platform used by 100K+ people, each month
Get the lowest prices and last minute availability
Discover and connect with 10,000+ experiences
Browse verified reviews and professional photographs
Have a question? Live chat with our experts 24/7
Other experiences similar to Phantom of the Opera
Musicals
The Lion King
Instant Confirmation
4.5
(2.1K)
from £30
Musicals
Mamma Mia!
Instant Confirmation
4.5
(1.9K)
from £18
Musicals
Wicked
Instant Confirmation
4.5
(1.9K)
from £23.40
Musicals
Mary Poppins
4.5
(722)
from £24£21
Save up to 12%
Musicals
Back to the Future
4.6
(91)
from £23.70
The world on your tap!Get the Headout app to get tickets on your phone and access app-only deals. Talk about win-win.
We've served 10 million+ guests and we are here for you
10 million +Happy customers across 10,000+ experiences
4.4/55,000+ verified reviews with 90% excellent score
In the MediaFeatured and recommended by the best brands
24 x 7 Help CenterHave a question? Live chat with local experts anywhere, anytime
Headout is building the future of how we experience our cities.
Made with ❤️ all over the 🌎
Headout Inc.
82 Nassau St #60351 New York, NY 10038
Cities
New YorkLas VegasRomeParisLondonDubaiBarcelona+63 more
Headout
About UsHelpCareersTravel BlogCompany BlogCreator Partnerships
Partners
Join HeadoutSupply Partner HubAffiliates
© Headout Inc
Privacy PolicyTerms of Usage