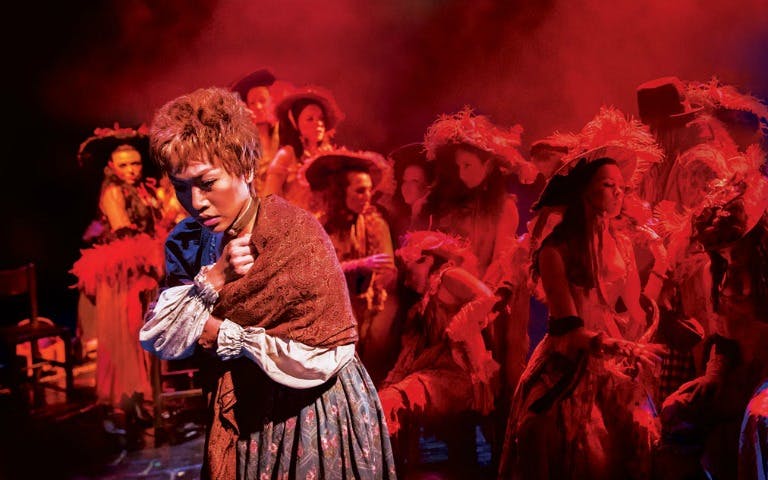 Be transported straight back to the tumultuous post-revolution France with this cult-classic based on Victor Hugo's legendary novel.

The musical first came to London in 1985, and since then, it has taken the stage by storm. Les Misérables has run successfully for over 30 years and shows no signs of taking a break. It stays true to its theme that revolves around the romantic literary movement in the mid and late 19th century in Europe. With its big, belting moments, this drama follows several characters whose lives are intertwined, making for a spellbinding musical that you won’t be able to forget.

Les Misérables follows the story of Jean Valjean, a peasant convicted for stealing a loaf of bread to feed his sister’s famished kid. After 19 years in prison, Valjean decides to live his life anew. A bishop deeply inspires him and sets him on the road to redemption. Valjean must now elude a police inspector named Javert who is intent on bringing him to justice. He meets many interesting characters along the way, and all of them are unexpectedly swept into the fray of a gruesome revolution that shakes the very foundations of France. The tale of Valjean’s continuous struggles and his blooming romance with a woman named Cosette is as fresh as the day Victor Hugo first wrote it. The cast does an incredible job of making sure the audience is constantly immersed in the world that this musical conjures.

Drama lovers | Fans of the Original Movie or Book

“In all key respects, Les Misérables has stood the test of time well.”
– The Telegraph

“Here celebrating its 25th anniversary, Les Misérables is a rousing, shamelessly entertaining evening of tuneful and spectacular popular theatre that saved the Royal Shakespeare Company from penury”
– The Guardian

Audience: Recommended for ages 8 and above

You will get an email confirmation with your Les Miserables voucher. Please display the same on your mobile phone with a valid photo ID.

Get 5% Cashback
from
£24
Check Availability
Best price guaranteed
Why Headout?
Trusted platform used by 100K+ people, each month
Get the lowest prices and last minute availability
Discover and connect with 10,000+ experiences
Browse verified reviews and professional photographs
Have a question? Live chat with our experts 24/7
Other experiences similar to Les Miserables
Musicals
The Lion King
Instant Confirmation
4.5
(2.1K)
from £30
Musicals
Mamma Mia
Instant Confirmation
4.5
(1.9K)
from £18
Musicals
Phantom of the Opera
Instant Confirmation
4.5
(1.2K)
from £27
Musicals
Mary Poppins
4.5
(724)
from £24
Musicals
Wicked
Instant Confirmation
4.5
(1.9K)
from £23.40
The world on your tap!Get the Headout app to get tickets on your phone and access app-only deals. Talk about win-win.
We've served 10 million+ guests and we are here for you
10 million +Happy customers across 10,000+ experiences
4.4/55,000+ verified reviews with 90% excellent score
In the MediaFeatured and recommended by the best brands
24 x 7 Help CenterHave a question? Live chat with local experts anywhere, anytime
Headout is building the future of how we experience our cities.
Made with ❤️ all over the 🌎
Headout Inc.
82 Nassau St #60351 New York, NY 10038
Cities
New YorkLas VegasRomeParisLondonDubaiBarcelona+63 more
Headout
About UsHelpCareersTravel BlogCompany BlogCreator Partnerships
Partners
Join HeadoutSupply Partner HubAffiliates
© Headout Inc
Privacy PolicyTerms of Usage