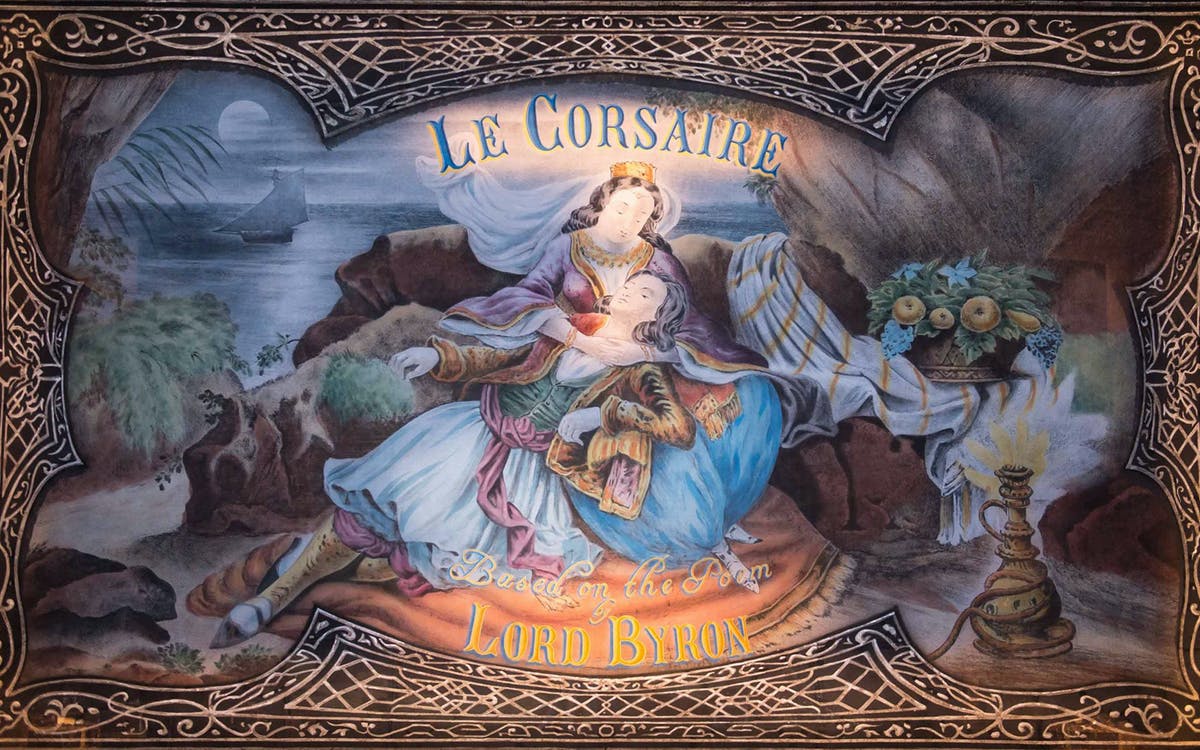 Delight in a swashbuckling pirate adventure, love story, and ballet, all wrapped into one exquisite performance by the English National Ballet!

Le Corsaire is generally presented in three acts. When a band of corsairs led by Conrad arrives in a busy market square somewhere in the Middle East, Medora, the ward of the bazaar-owner, spots the group from her balcony. Against her will, Medora had been sold to the highest bidder by her own loathsome guardian Isaac Lanquedem. With a bit of trickery and dancing, Conrad and the corsairs flee from the market with Medora and all the slave girls. Saved from her ominous plight, Medora falls deeply in love with Conrad. What follows is an epic story of love, treachery, and stormy seas!

The set and costume design for Anna-Marie Holmes’ classic story ballet is done by two-time Academy Award-nominee Bob Ringwood, who was undoubtedly amongst the most gifted costume designers of the 20th century. Coupled with gorgeous lighting by Neil Austin, Le Corsaire has been a resounding success across the world, including Paris and Tokyo.

“Shimmering dancing and packed to the gills with pirates” - Independent UK

Duration
2hrs 30mins with one interval

Seating
The London Coliseum has a seating capacity of 2359

Missing any information?
Yes
No
This experience is unavailable
You'll be the first to know when these tickets are back online.
notify me
Awesome!We will notify you.
Why Headout?
Trusted platform used by 100K+ people, each month
Get the lowest prices and last minute availability
Discover and connect with 10,000+ experiences
Browse verified reviews and professional photographs
Have a question? Live chat with our experts 24/7
Other experiences similar to Le Corsaire
Free Cancellation
Landmarks
Tower of London Tickets with Crown Jewels
Instant Confirmation
4.3
(5.4K)
£29.90
Free Cancellation
Walking Tours
Warner Bros. Studio Tour London with Round-Trip Air-conditioned Transfers
Instant Confirmation
4.4
(1.7K)
from £84.60
Musicals
The Lion King
Instant Confirmation
4.5
(2.3K)
from £42
Musicals
Wicked
Instant Confirmation
4.5
(2K)
from £23.40
Musicals
Mamma Mia!
Instant Confirmation
4.5
(2K)
from £18
The world on your tap!Get the Headout app to get tickets on your phone and access app-only deals. Talk about win-win.
We've served 15 million+ guests and we are here for you
15 million +Happy customers across 10,000+ experiences
4.4/55,000+ verified reviews with 90% excellent score
In the MediaFeatured and recommended by the best brands
24 x 7 Help CenterHave a question? Live chat with local experts anywhere, anytime
Headout is building the future of how we experience our cities.
Made with ❤️ all over the 🌎
Headout Inc.
82 Nassau St #60351 New York, NY 10038
Cities
New YorkLas VegasRomeParisLondonDubaiBarcelona+63 more
Headout
About UsHelpCareersTravel BlogCompany BlogCreator Partnerships
Partners
Join HeadoutSupply Partner HubAffiliates
© Headout Inc
Privacy PolicyTerms of Usage