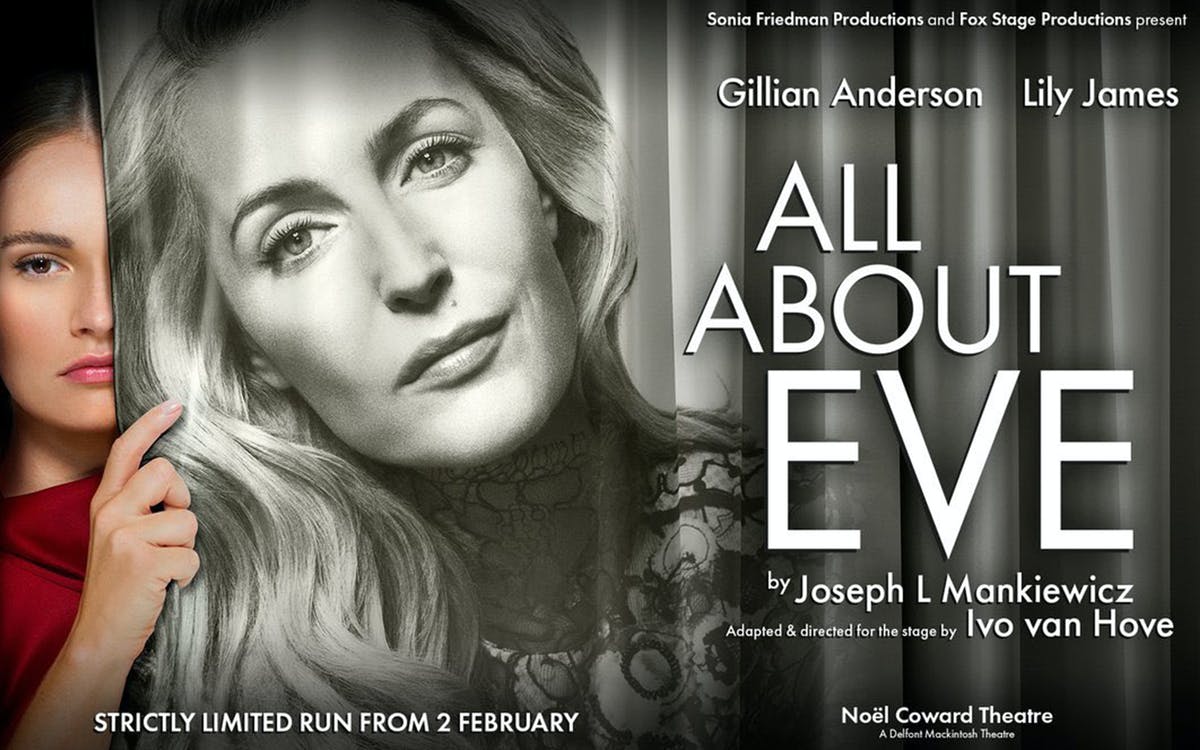 All About Eve - Tickets

Join Margo Channing (Played by Gillian Anderson) on her arduous journey to remain relevant on the Broadway stage even as she faces a dire threat from her understudy. Enjoy this original adaptation of the critically acclaimed and award-winning 1950 film, “All About Eve”.

why watch all about eve

All About Eve is a modern adaptation of the famous Academy Award-winning movie from the with the same name. The story is replete with an aura of mystery and duplicity brought out by its fascinating characters. Tony Award-winning director Ivo Van Hove does a fantastic job of putting together the stage version of this classic film. Gillian Anderson portrays the charming Margo Channing, who sees nothing but good in others and is deceived by her ardent fan Eve, played by Lily James. Both the actors have enjoyed success on stage as well as the big screen, and are sure to impress you with their stunning performances. 2-time Mercury Award-winner PJ Harvey adds a new dimension to the performance with her expert music direction. “All About Eve” is a fitting tribute to Joseph L. Mankiewicz’s evergreen 1950 American film.

Margo Channing is in the twilight of her career as she approaches the ripe age of 40. She is worried that her days on Broadway are numbered. She encounters an eager and enthusiastic Eve Harrington who poses as a fan and is adamant to learn more from her idol. The adulation is all but a farce, for Eve has already set in motion a plan to rise to the top of Broadway by dethroning her icon. Unbeknownst to Margo, Eve is immediately hired as an assistant after the encounter and gets the role of her understudy. Eve then manages to lure theatre critics to watch her performance and jumpstart her career in Hollywood. Watching this story of betrayal and deceit brought to life by an incomparable cast will certainly be an unforgettable experience this season at the West End.

Fans of the Original 1950 Movie | Lovers of Intense Drama

“All About Eve will be a welcome return to the UK for Van Hove, who has wowed British audiences with his productions of A View from the Bridge at the Young Vic and Network at the National Theatre.”
– The Guardian

Missing any information?
Yes
No
This experience is unavailable
You'll be the first to know when these tickets are back online.
notify me
Awesome!We will notify you.
Why Headout?
Trusted platform used by 100K+ people, each month
Get the lowest prices and last minute availability
Discover and connect with 10,000+ experiences
Browse verified reviews and professional photographs
Have a question? Live chat with our experts 24/7
Other experiences similar to All About Eve
Free Cancellation
Landmarks
Tower of London Tickets with Crown Jewels
Instant Confirmation
4.3
(5.4K)
£29.90
Musicals
Mamma Mia!
Instant Confirmation
4.5
(1.9K)
from £18
Free Cancellation
Dinner Cruises
Westminster To Greenwich River Thames Sightseeing Cruise
Instant Confirmation
4.3
(1.2K)
£14
Musicals
Wicked
Instant Confirmation
4.5
(2K)
from £23.40
Musicals
Les Miserables
Instant Confirmation
4.5
(1.3K)
from £24
The world on your tap!Get the Headout app to get tickets on your phone and access app-only deals. Talk about win-win.
We've served 15 million+ guests and we are here for you
15 million +Happy customers across 10,000+ experiences
4.4/55,000+ verified reviews with 90% excellent score
In the MediaFeatured and recommended by the best brands
24 x 7 Help CenterHave a question? Live chat with local experts anywhere, anytime
Headout is building the future of how we experience our cities.
Made with ❤️ all over the 🌎
Headout Inc.
82 Nassau St #60351 New York, NY 10038
Cities
New YorkLas VegasRomeParisLondonDubaiBarcelona+74 more
Headout
About UsHelpCareersTravel BlogCompany BlogCreator Partnerships
Partners
Join HeadoutSupply Partner HubAffiliates
© Headout Inc
Privacy PolicyTerms of Usage