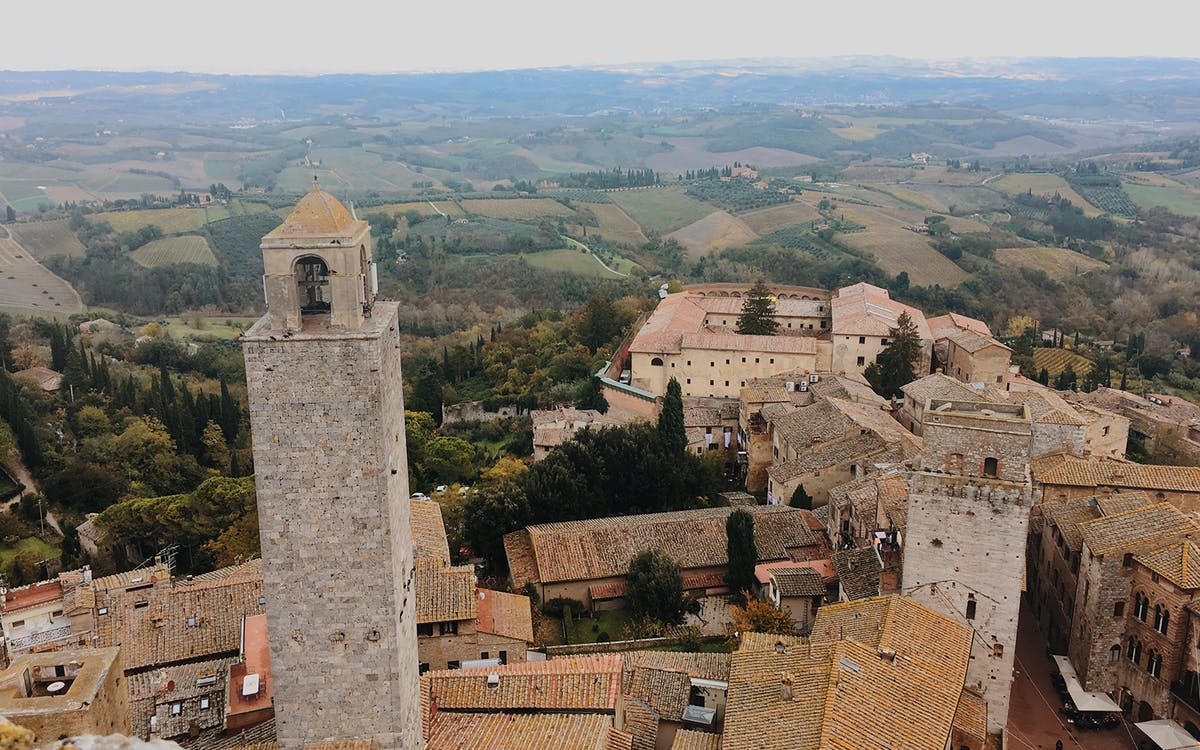 Get entry to the Duomo di San Gimignano, whose walls are entirely covered in beautiful frescoes. See the Santa Fina Chapel too, dedicated to San Gimignano's patron saint, Fina.

Without a doubt, the Duomo of San Gimignano is one of the most important monuments in the city. Inside, the church walls are decorated with frescoes that reveal stories from the Old and New Testaments. These masterpieces were painted by famous artists of the 14th-century Sienese school

Once you're inside, explore the Renaissance jewel that is the Santa Fina Chapel. Its walls have frescoes that were painted by Domenico Ghirlandaio and depict airy scenes of the life of Fina. Although never officially canonized, Fina is one of San Gimignano’s patron saints. Legend has it that St. Gregory appeared and predicted the exact day (his feast day, March 12) on which Fina would die. He was right, Fina passed away on that day and miracles took place almost immediately: the bells of the cathedral began to toll spontaneously, and yellow violets to grow out of her pallet.

Shorts and sleeveless shirts are not allowed. Please dress appropriately.

Missing any information?
Yes
No
€7
Check availability
Best price guaranteed
Why Headout?
Trusted platform used by 100K+ people, each month
Get the lowest prices and last minute availability
Discover and connect with 10,000+ experiences
Browse verified reviews and professional photographs
Have a question? Live chat with our experts 24/7
Other experiences similar to San Gimignano - Duomo Entrance Ticket
Free Cancellation
Museums
San Gimignano: Museum Pass
Instant Confirmation
4.5
(1.4K)
€15.50
The world on your tap!Get the Headout app to get tickets on your phone and access app-only deals. Talk about win-win.
We've served 15 million+ guests and we are here for you
15 million +Happy customers across 10,000+ experiences
4.4/55,000+ verified reviews with 90% excellent score
In the MediaFeatured and recommended by the best brands
24 x 7 Help CenterHave a question? Live chat with local experts anywhere, anytime
Headout is building the future of how we experience our cities.
Made with ❤️ all over the 🌎
Headout Inc.
82 Nassau St #60351 New York, NY 10038
Cities
New YorkLas VegasRomeParisLondonDubaiBarcelona+74 more
Headout
About UsHelpCareersTravel BlogCompany BlogCreator Partnerships
Partners
Join HeadoutSupply Partner HubAffiliates
© Headout Inc
Privacy PolicyTerms of Usage