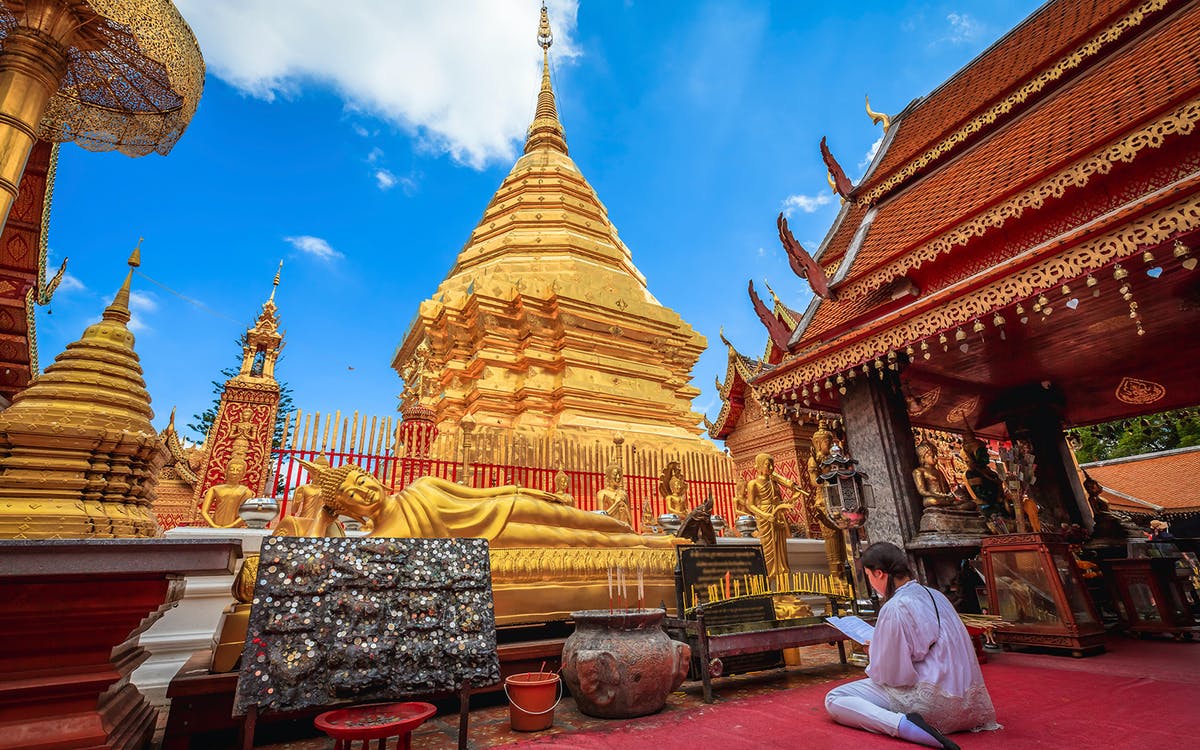 Take in the sunrise at the Wat Phrat That Doi Suthep temple, explore the Wat Pha Lat (The Hidden Temple) and the Wat Umong temple, and visit the Kruba Srivichai Monument on this half-day guided tour. Enjoy convenient hotel transfers as well.

Nestled 1685 meters above Chiang Mai, this is the most famous temple in the city, and for good reason. Its gorgeous views alone are reason to climb the 306 steps and you’ll experience the sunrise when you reach the top. With the Doi Poi mountain as its namesake, this temple is said to have been built in 1383 and has remained a treasured Thai religious site for centuries. Be sure to ask your guide about the ‘White Elephant’ legend along with other stories connected to this striking temple. Architectural and decorative features to admire include the gold-plated spires, the white elephant statue you’ll see first on arriving, and the Naga-lined staircase leading up to the top along with numerous pagodas, statues, and ancient relics.

Visit the golden Kruba Srivichai Monument where you can make an offering here with the monks. At a height of 21-meters and a width of 18-meters, this statue pays tribute to one of Thailand’s most illustrious monks – Kruba Srivichai – who was also an engineer and built many mountain roads.

Part of the three ‘forest temples’ in Doi Suthep National Park, Wat Pha Lat, or ‘The Hidden Timple’ is literally hidden in the lush foliage of the forest. A much smaller temple, Wat Pha Lat is still special to visit for its calm and natural surroundings and its religious significance. The trail you’ll climb is called the ‘Monk’s Trail’ and is quite an adventure through the forest. The temple is known for its impressive dragon statues at the entrance and Burmese artwork.

Wind up this excursion at Wat Umong, a 700-year-old temple with interesting sections such as the underground tunnels and the magnificently imposing ‘chedi’ or ‘shrine.’ Now known world-over as a spiritual center for Buddhists, the peaceful and rustic setting of this temple is heightened by the specially-constructed underground tunnels which create a noiseless ambiance for better meditation.

6am: Doi Suthep and watch the sunrise

8am: Kruba Srivichai Monument (make a merit offering with monks)

There’s free pick-up and drop-off for visitors located in the central city of Chiang Mai within a 2km radius of Thapae Gate.

Meeting Point (If not opted for Hotel Pick-up)

Missing any information?
Yes
No
฿1065
Check availability
Best price guaranteed
Why Headout?
Trusted platform used by 100K+ people, each month
Get the lowest prices and last minute availability
Discover and connect with 10,000+ experiences
Browse verified reviews and professional photographs
Have a question? Live chat with our experts 24/7
The world on your tap!Get the Headout app to get tickets on your phone and access app-only deals. Talk about win-win.
We've served 15 million+ guests and we are here for you
15 million +Happy customers across 10,000+ experiences
4.4/55,000+ verified reviews with 90% excellent score
In the MediaFeatured and recommended by the best brands
24 x 7 Help CenterHave a question? Live chat with local experts anywhere, anytime
Headout is building the future of how we experience our cities.
Made with ❤️ all over the 🌎
Headout Inc.
82 Nassau St #60351 New York, NY 10038
Cities
New YorkLas VegasRomeParisLondonDubaiBarcelona+74 more
Headout
About UsHelpCareersTravel BlogCompany BlogCreator Partnerships
Partners
Join HeadoutSupply Partner HubAffiliates
© Headout Inc
Privacy PolicyTerms of Usage