If you wish to get a sense of Barcelona’s rich architectural heritage from the last century and visit two iconic landmarks that exemplify this heritage in their entirety, then this tour is perfect for you. On this guided tour, you will visit The Sagrada Familia and Hospital de Sant Pau Art with skip the line access at both these landmarks. You will also learn about the extremely popular design movement Catalan Modernisme and its relationship with the city of Barcelona.

This tour is the perfect way to learn more about Barcelona’s distinct style of architecture and how it binds with the history of this Catalan city. A design movement that built up to its crescendo in the early 20th century, Art Nouveau or Catalan Modernisme has heavily influenced Barcelona’s architectural heritage. Barcelona could be called the capital of Art Nouveau in the world. On this tour, you will visit two prominent examples of this school, The Sagrada Familia and Hospital de Sant Pau. Both these locations are UNESCO World Heritage Sites.

The Sagrada Familia is one of the most recognisable monuments of Barcelona and a monument that requires no introduction. It doesn’t matter if you’re in the city or still planning to visit it, there is no way that you wouldn’t have heard about it. The Sagrada Familia stands tall in the heart of Barcelona and is one of the most renowned structures in Europe. Under construction since 1882, the building was designed by Antoni Gaudi and long after his death, his drawings and models are still being interpreted to correctly understand the complexity of his design. Only with the advent of computers has the construction speed progressed.

The tour then heads to the beautiful Hospital de Sant Pau, the largest art nouveau site in the world. Designed by the Catalan Modernisme architect Lluís Domènech i Montaner, the Hospital de Sant Pau now houses academic institutions such as the United Nations University and the Casa Asia. The monument is linked to Sagrada Familia by the Avenida Gaudí, a street that runs diagonally across Barcelona’s road grid through the Eixample district.

At the Sagrada Familia, you will be able to skip the ticket lines with your priority access ticket and head inside the church. Before you head inside, your guide will give you a comprehensive tour of the basilica’s exteriors and show you the symbolism on the two completed facades - Nativity Facade and Passion Facade. You will learn about Catalan Modernisme and how Gaudi pushed the limits of this movement beyond its norm with the Sagrada Familia. Your guide will give you detailed insights into the elaborate façades and dreamy interiors, as well as the symbolisms that were a product of Gaudi’s religious inclination.

The tour will then head to the beautiful Hospital de Sant Pau. The building was designed by Modernisme architect Lluís Domènech i Montaner and was finished in 1930. The expansive monument covers nine city blocks and was an active hospital until the 1990s. It underwent five years of renovation and restoration in order to house institutions such as the United Nations University and the Casa Asia. The Hospital de Sant Pau now stands as the largest art nouveau site in the world and is a sight to behold. If you wish, you can also purchase tickets on site to go inside the Hospital de Sant Pau and explore the interiors.

The private tour takes place daily at 3:00 PM and is 3 hours long.

Correct dress code is requested for entrance to the Sagrada Familia Basilica. No tank tops, strapless shirts, short shorts or sandals will be accepted. 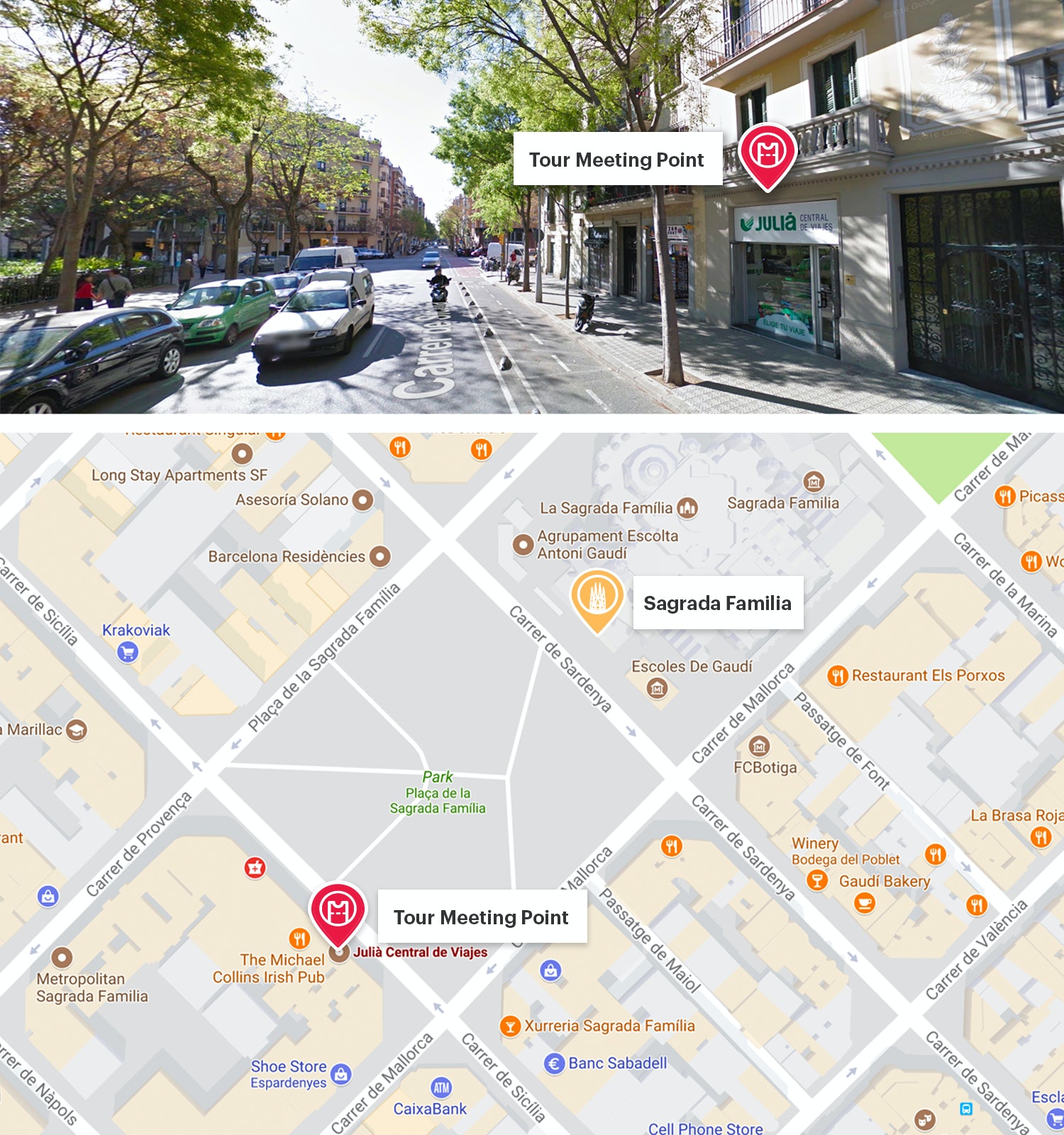 How to Find
The Julia Travel office is located on Carrer de Sicilia, opposite Park Plaça de la Sagrada Família.