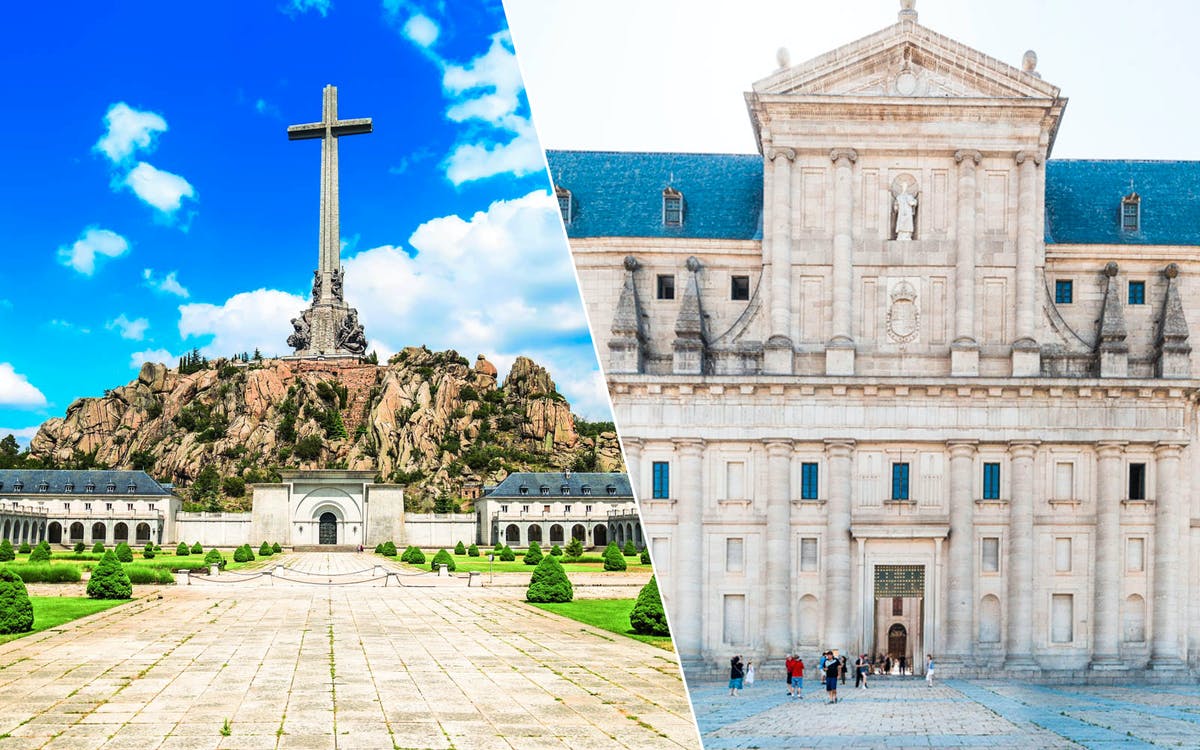 Dive straight into Spanish history at the Royal Monastery of El Escorial, one of the country's most beautiful architectural structures! Combine your trip with a visit to the Valley of the Fallen, where you can see the largest cross in Europe.

Hop aboard a comfortable air-conditioned bus and head straight to the former royal residence and monastery of El Escorial, considered by many to be the 8th wonder of the world. Commissioned by King Felipe II, this vast palace became a symbol of the greatness of the Spanish Empire in the 16th and 17th centuries. Upon arrival, your guide will give you an explanation from the outside, after which you can set off exploring the palace on your own. Wander inside the remarkable library that features beautiful frescoes on its ceilings. You can also visit the Habsburg Palace and the Chapter House.

Board your bus again at the end of the guided tour for a short drive (about 9 kilometers) to Sierra de Guadarrama, where you can see the Valley of the Fallen. You’ll be able to see it from far, far away thanks to the gigantic 500-foot cross (the largest cross in the world) built over the site. The monument was built by General Franco to commemorate those who lost their lives in the Spanish Civil War.

Missing any information?
Yes
No
€59
Check Availability
Best price guaranteed
Why Headout?
Trusted platform used by 100K+ people, each month
Get the lowest prices and last minute availability
Discover and connect with 10,000+ experiences
Browse verified reviews and professional photographs
Have a question? Live chat with our experts 24/7
Other experiences similar to Guided Tour of Royal Monastery of El Escorial and the Valley of the Fallen
Landmarks
Royal Palace of Madrid Skip the Line Tickets
Instant Confirmation
4.3
(2K)
€13
Museums
Skip the Line Tickets to Reina Sofía Arts Center
4.3
(1.2K)
€11.90
Free Cancellation
Guided Tours
Prado Museum Guided Tour
4.1
(2.2K)
from €35
Museums
Paseo del Arte - 3 Museum Pass for the Prado, Thyssen-Bornemisza and Reina Sofia
4.4
(1.2K)
€32
Free Cancellation
Guided Tours
Royal Palace of Madrid Guided Tour with Priority Access
Instant Confirmation
4.3
(523)
from €32
The world on your tap!Get the Headout app to get tickets on your phone and access app-only deals. Talk about win-win.
We've served 10 million+ guests and we are here for you
10 million +Happy customers across 10,000+ experiences
4.4/55,000+ verified reviews with 90% excellent score
In the MediaFeatured and recommended by the best brands
24 x 7 Help CenterHave a question? Live chat with local experts anywhere, anytime
Headout is building the future of how we experience our cities.
Made with ❤️ all over the 🌎
Headout Inc.
82 Nassau St #60351 New York, NY 10038
Cities
New YorkLas VegasRomeParisLondonDubaiBarcelona+63 more
Headout
About UsHelpCareersTravel BlogCompany BlogCreator Partnerships
Partners
Join HeadoutSupply Partner HubAffiliates
© Headout Inc
Privacy PolicyTerms of Usage