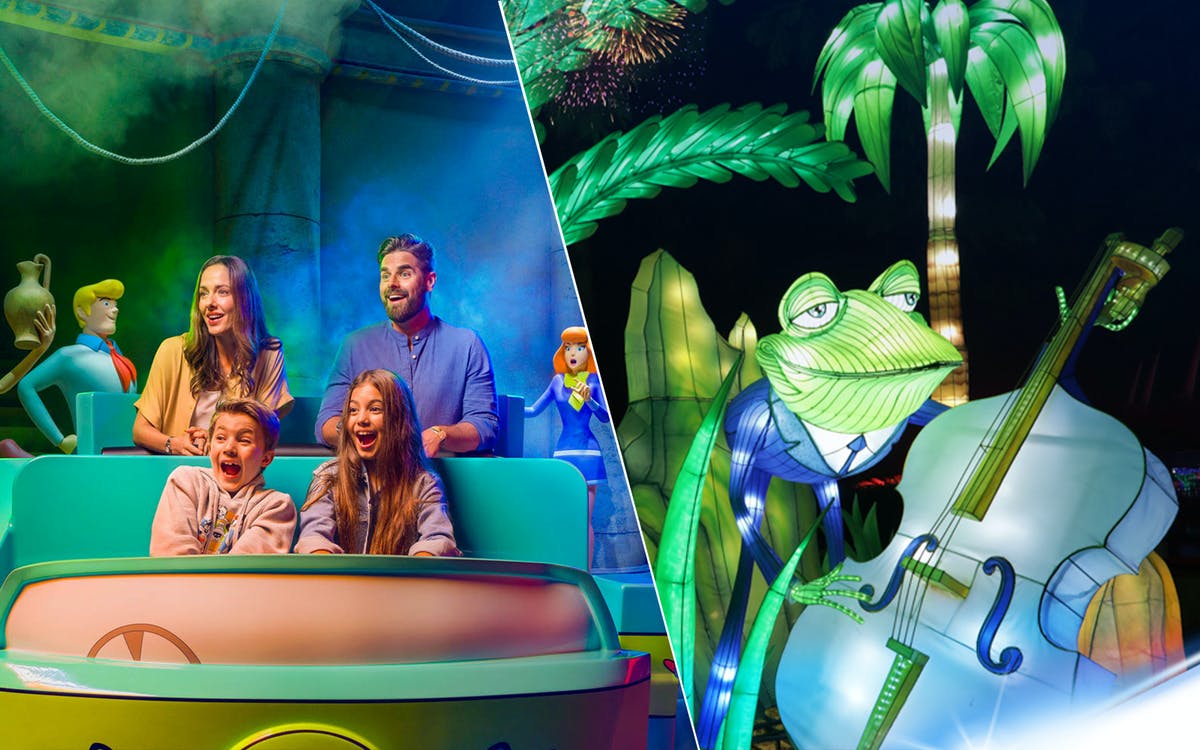 Your childhood dreams of paddling a car with the Flintstones, spending a day chewing carrots with Bugs Bunny, and plotting to kill villains with Batman are all going to come true in this fantasy land! Set over a sprawling 1.65 million square feet, the park is set in 6 zones designed around various themes - Warner Bros. Plaza, Gotham City, Metropolis, Cartoon Junction, Bedrock, and Dynamite Gulch. Make your way to the Warner Bros. Plaza which is a tribute to the Golden Age of Hollywood. Have Breakfast at Tiffany’s with Audrey Hepburn while you’re here and feast your eyes on the enthralling “All-Star Spectacular” video which brings to life the Warner Bros film library.

Dubai Garden Glow is a one-of-a-kind recreation park that is fun for all members of the family. Walk through the artistic garden and discover more than 4 dedicated parks. With their tagline ‘It’s a Wonderful World’, Dubai Garden Glow brings forth the many wonders of the world and celebrates life on the planet using only recyclable items. There is also a special interactive edutainment zone aimed at kids to learn about the environment and the park also offers cuisine from all over the world in case you get hungry. With all this and more, it's no wonder that the Dubai Garden Glow are the perfect family outing in Dubai.

Missing any information?
Yes
No
This experience is unavailable
You'll be the first to know when these tickets are back online.
notify me
Awesome!We will notify you.
Why Headout?
Trusted platform used by 100K+ people, each month
Get the lowest prices and last minute availability
Discover and connect with 10,000+ experiences
Browse verified reviews and professional photographs
Have a question? Live chat with our experts 24/7
Other experiences similar to Combo: Warner Bros. World™ Abu Dhabi + Dubai Garden Glow Tickets
Landmarks
EKart Zabeel Karting Zone Dubai Mall
Instant Confirmation
4.5
(833)
AED 95
Concerts
La Perle By Dragone
4.4
(2.2K)
from AED 209
Ziplining
Jebel Jais Flight Summer Offer + 30% Off GoPro Rental
Instant Confirmation
4.5
(1.4K)
from AED 300AED 210
Save up to 30%
Free Cancellation
Attraction Transfers
The Palm Monorail - Gateway to Atlantis
Instant Confirmation
4.3
(266)
AED 20
Free Cancellation
Helicopter Tours
Palm Helicopter Tour: 17 Minutes
4.2
(934)
from AED 855
The world on your tap!Get the Headout app to get tickets on your phone and access app-only deals. Talk about win-win.
We've served 15 million+ guests and we are here for you
15 million +Happy customers across 10,000+ experiences
4.4/55,000+ verified reviews with 90% excellent score
In the MediaFeatured and recommended by the best brands
24 x 7 Help CenterHave a question? Live chat with local experts anywhere, anytime
Headout is building the future of how we experience our cities.
Made with ❤️ all over the 🌎
Headout Inc.
82 Nassau St #60351 New York, NY 10038
Cities
New YorkLas VegasRomeParisLondonDubaiBarcelona+74 more
Headout
About UsHelpCareersTravel BlogCompany BlogCreator Partnerships
Partners
Join HeadoutSupply Partner HubAffiliates
© Headout Inc
Privacy PolicyTerms of Usage