Get Discounts On The Snowman London Tickets

About The Theatre
Seating Plan
The Snowman

One of West End’s most popular and longest running shows is back for its record-breaking 21st year on stage! This jovial and highly entertaining show tells the story of a young boy and his magical snowman on a winter adventure. Being one of West End’s longest running shows, it has become a festive tradition and an absolute must watch during the glorious season of Christmas. The show is based on the famous children’s picture book (The Snowman) by Raymond Briggs and has been presented every year by Sadler’s Wells at the Peacock Theatre during Christmas. Young or old no matter, The Snowman is a show that will leave you deeply entertained and satisfied.

As mentioned earlier, this West End production is based on the famous children’s book, The Snowman, by author Raymond Briggs and it was published in the year 1978. Given the widespread success and international recognition of this book, it was soon adapted into a short animated television special, which further went on to win a number of awards, including a prestigious BAFTA TV Award. It was only a matter of time before this famous story was bound to hit the West End stage, and in 1986 it did. Since its debut, this show, which is told through images and movements, has entertained tens of thousands of people and has become a Christmas tradition in the West End Circles. With smooth direction from Bill Alexander, dazzling lighting from Tom Mitchell, brilliant choreography by Robert North and exceptional set design by Ruari Murchison, this is a show you definitely do not want to miss this Christmas!

On a cold winter’s day, a young boy builds a snowman which miraculously comes to life at the stroke of midnight. Together, they play with various appliances, toys and other items in the house, all the while being careful not to wake up the boys parents. After finding a motorcycle in the garden, the two then embark on a gleeful and adventurous escapade to the North Pole, during which they encounter dancing penguins, jubilant snowmen, Father Christmas and the Evil Jack Frost. The West End adaptation of ‘The Snowman’ is more or less based on the original book with a few exceptions here and there, including the addition of two characters - The Ice Princess and Jack Frost. 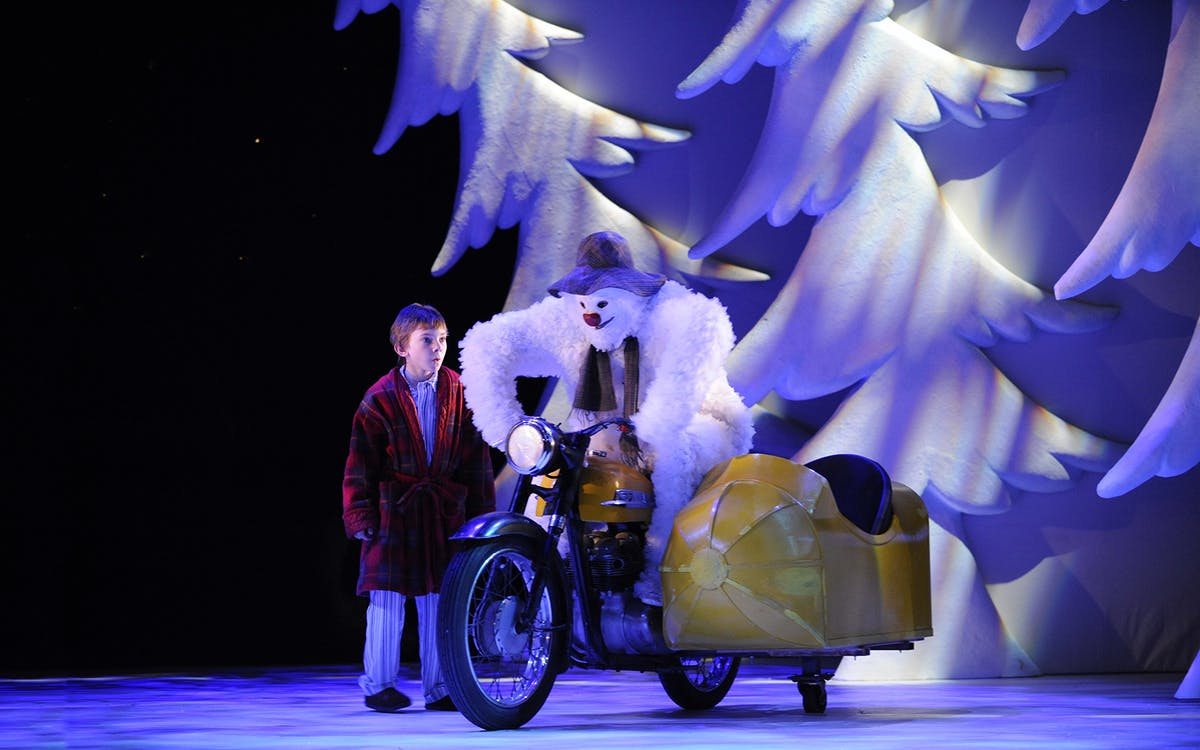 Audience
Suitable for all ages. Children above the age of 2 need a ticket.

Seating
The Peacock Theatre has a seating capacity of 999.

‘The Snowman’ on West End has been an absolute delight and has received rave reviews from audiences and critics alike. Taking the stage for 21 years straight is no easy feat, but this production has managed to do just that. With a beautiful storyline, loveable characters and wonderful direction, it is no wonder why this West End classic has been able to attract fans to the theatres year after year. Although on the surface, this may seem like a performance meant only for toddlers and little children, the reality is quite the opposite! Everyone who comes for the show, be it a 3-year old or a teenager or even a grandparent, leaves with a warm heart and big smile on their face. This feel-good show about friendship and fun is perfect for all ages and is powerful enough to melt anyone’s heart.

Book The Snowman London tickets and save £10 on your first booking. Use promo code WE10

Looking for discounts on The Snowman London tickets?

Have a look at the real-time seat availability and prices of different sections for The Snowman London. In the interactive seat-map, select the date that you would like to watch the show and check out the seats available for that day. You can filter the seats as per your desired price range and purchase tickets directly.

Use promo code WE10 and save £10 on The Snowman London tickets.

Apart from getting tickets for The Snowman online, there are other ways to obtain West End tickets for cheap, such as:

Day Seats are discounted tickets that are available for purchase, and are to be used, on the same day at the theatre. Please note that the availability of tickets is based on the discretion of the Peacock Theatre Box Office, and may not be available for all shows.

Day Seats at Peacock Theatre are currently unavailable for purchase. They will be made available once the show opens.

‘The Snowman’ is presented every year at London’s Peacock Theatre. Located in the City of Westminster, this theatre is actually a part of the London School of Economics and Political Science campus, and is often used by the university to conduct many of its lectures, public talks, conferences and political speeches.

This 999-seater theatre was opened in 1960 under the name ‘The Royalty Theatre’. The name was later changed to ‘The Peacock’ when the London School of Economics purchased the theatre. An interesting reason for this theatre’s fame is an urban myth, that it is home to one of West End’s most unusual ghosts, a dolphin named ‘Flipper’. Rumour has it that during one of Paul Raymond’s performances, a dolphin was kept under the stage, where it lived and eventually died from neglection. The remnants of the tank still remain and some people claim to have heard a squeaking, similar to a dolphin's call.

Q: What is the recommended age limit for the show?
A: The show is suitable for all ages.

Q: Is there a possibility that I will get partial view seating if I purchase discount tickets for The Snowman London?
A: When booking with Headout, you will get to select your specific seats, thus, ensuring you do not get stuck with partial view. However, if you opt to try and win lottery tickets, or purchase day seats, your seats will be allocated at the discretion of the Box Office, which can potentially mean partial view seating or split seats.