Get Discounts On Nativity! The Musical London Tickets

This holiday season, spread the cheer and celebrate the festive mood with the musical adaptation of the popular Christmas comedy film ‘Nativity!’. Adapted for the stage by the creator of the movie, Debbie Isitt, ‘Nativity!’ is a feel-good show full of Christmas joy and holiday spirit, and makes for the perfect way to enjoy this wonderful time of the year. ‘Nativity!’ tells the story of a nativity play organized by a Coventry primary school and describes how the production slowly gets turned into an overblown, fun and chaotically brilliant performance.

With stunning direction, music, and lyrics, from Debbie Isitt in collaboration with Nicky Ager, lighting by Tim Mitchell and choreography by Andrew Wright, ‘Nativity!’ is one seasonal production you and your family definitely do not want to miss. The following guide will help you get more information about the production and also help you find discounted tickets for the same.

As mentioned earlier, ‘Nativity!’ is based on the film of the same name, which released in 2009. The movie was a raging success and it inspired two sequels - ‘Nativity 2: Danger in the Manger’ and ‘Nativity 3: Dude, Where’s My Donkey?’. Given the success and positive reception of the film in November 2016, the film was adapted into a stage musical, and the production made its world premiere at the Birmingham Repertory Theatre in October 2017. Like the movie, the onstage performance too garnered immense praise and became an instant fan-favourite. The show, after a great run in 2018, will soon return to London’s West End, playing at the Eventim Apollo from 11th - 29th December 2019.

The cast includes some of West End’s favourites, including Sharon Osbourne, Danny Dyer, Dani Dyer, Rylan Clark-Neal, and Simon Lipkin, and the production also features all of the catchy, sing-along hits from the original movie - ‘Sparkle and Shine’, ‘Nazareth’, ‘She’s the Brightest Star’ and many others. All in all, ‘Nativity!’ makes for a great watch and an immensely fun family outing.

Mr. Maddens (teacher at St. Bernadette’s, an underprivileged school) and Mr. Shakespeare (teacher at Oakmoor, a rich, private school) are at loggerheads with each other as each tries to outshine the other by putting up the best nativity play. In an attempt to gain an advantage over Mr. Shakespeare, Mr. Maddens lies and claims that a Hollywood producer is coming to see his school’s show and make it into a movie.

This lie, unknowingly gets spread by his assistant Mr. Poppy and soon the whole school believes that the producer is actually coming. Mr. Maddens is also facing personal problems of his own as his girlfriend recently broke up with him and this separation has left him distraught. However, despite all the odds and difficulties, the two teachers, Mr. Maddens and Mr. Poppy, along with the over-enthusiastic kids, somehow manage to put out an absolutely brilliant and successful nativity play which wins the hearts of everyone, including Mr. Shakespeare. 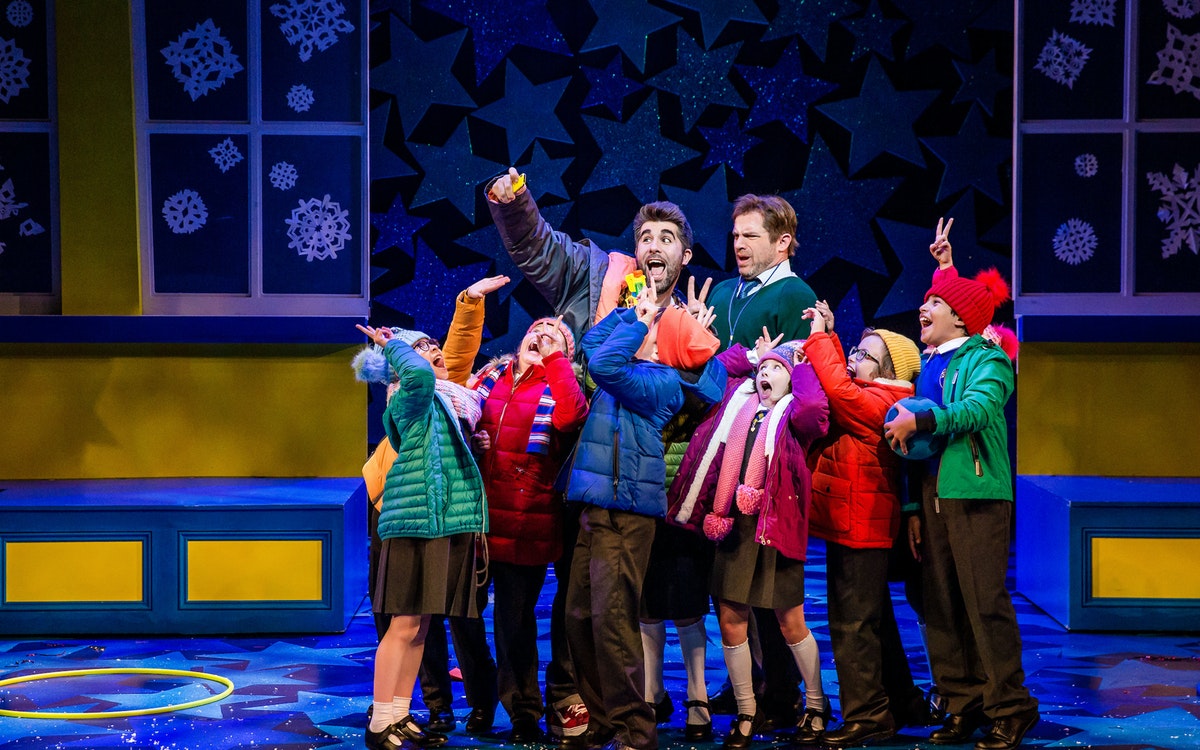 Use promo code WE10 and save £10 on Nativity The Musical London tickets.

Seating
The Eventim Apollo has a seating capacity of 3,487.

Looking out for discount on Nativity The Musical London tickets !

Have a look at the real-time seat availability and prices of different sections for Nativity! The Musical London. In the interactive seat-map, select the date that you would like to watch the show and check out the seats available for that day. You can filter the seats as per your desired price range and purchase tickets directly.

Use promo code and save £10 on Nativity The Musical London tickets.

‘Nativity!’ first appeared on stage in 2017 at the Birmingham Repertory Theatre in October of 2017. The show was much loved by audiences and it became an instant hit amongst the critics as well.

“It really is tinsel-tastic.”
– The Times

“A hefty but charming feelgood bonanza.”
– The Telegraph

Apart from getting tickets for Nativity The Musical online, there are other ways to obtain West End tickets for cheap, such as:

Nativity The Musical TKTS tickets will be available once the show premieres.

Day Seats are discounted tickets that are available for purchase, and are to be used, on the same day at the theatre. Please note that the availability of tickets is based on the discretion of the Eventim Apollo Box Office, and may not be available for all shows.

Day Seats at Eventim Apollo are currently unavailable for purchase. They will be made available once the show opens.

Q: Is there a possibility that I will get partial view seating if I purchase discounted Nativity The Musical London tickets?
A: When booking with Headout, you will get to select your specific seats, thus, ensuring you do not get stuck with partial view. However, if you opt to try and win lottery tickets, or purchase day seats, your seats will be allocated at the discretion of the Box Office, which can potentially mean partial view seating or split seats.

The Eventim Apollo, formerly known as the Hammersmith Apollo, is one of London’s top live entertainment venues and is located in Hammersmith, West London. This theatre first opened in 1932 as the Gaumont Palace Cinema and was designed by renowned theatre architect Robert Cromie. The Eventim Apollo is one of UK’s largest and best-preserved theatres, and this venue has played host to many legendary acts including The Beatles, The Rolling Stones, Bruce Springsteen, Motorhead, Bob Marley and many others. With a 35 foot deep stage and a beautiful auditorium with a capacity of 3,632 (standing 5,039), the Eventim Apollo is one of the greatest venues to watch a live performance.