Get Discounts On Life Of Pi London Tickets!

About The Theatre
Seating Plan
Life of Pi

All set to put some sizzle on the stage, the award-winning stage adaptation by Lolita Chakrabarti — Life of Pi — will return to West End after a spectacular run in 2019. The play, also based on the feature film of the same name, is adapted from an award-winning novel from 2001. Its larger-than-life production will feature life-sized puppets that will take you on an extraordinary journey, making sure you’re in awe of its innovative set design. The highly anticipated production will make its return to London’s Wyndham Theatre in June and will run for a limited time till October.

The cast and crew for Life of Pi’s West End run is yet to be announced. The creative team will include director Max Webster with puppet and movement director Finn Caldwell. The show will also have separate puppet designers — Caldwell and Nick Barnes apart from composer Andrew T Mackay, costume designer Tim Hatley, sound designer Carolyn Downing, video production designer Andrzej Goulding. The original casting for the show is done by Polly Jerrold.

After the sinking of the cargo ship that was ferrying his family and some animals to Canada, sixteen-year-old Pi finds himself stranded on a lifeboat with five survivors. Sailing through the harsh and unforgiving sea, Pi and an orang-utan, a badly-wounded zebra, a hyena, and a tiger make their way on an epic adventure. It is not long before he’s left with — Richard Parker — the tiger and his hopes of surviving dwindle on every passing day. With a journey that pushes the two to their limits, will Pi be able to endure the merciless nature and make his way to the seashore once again? 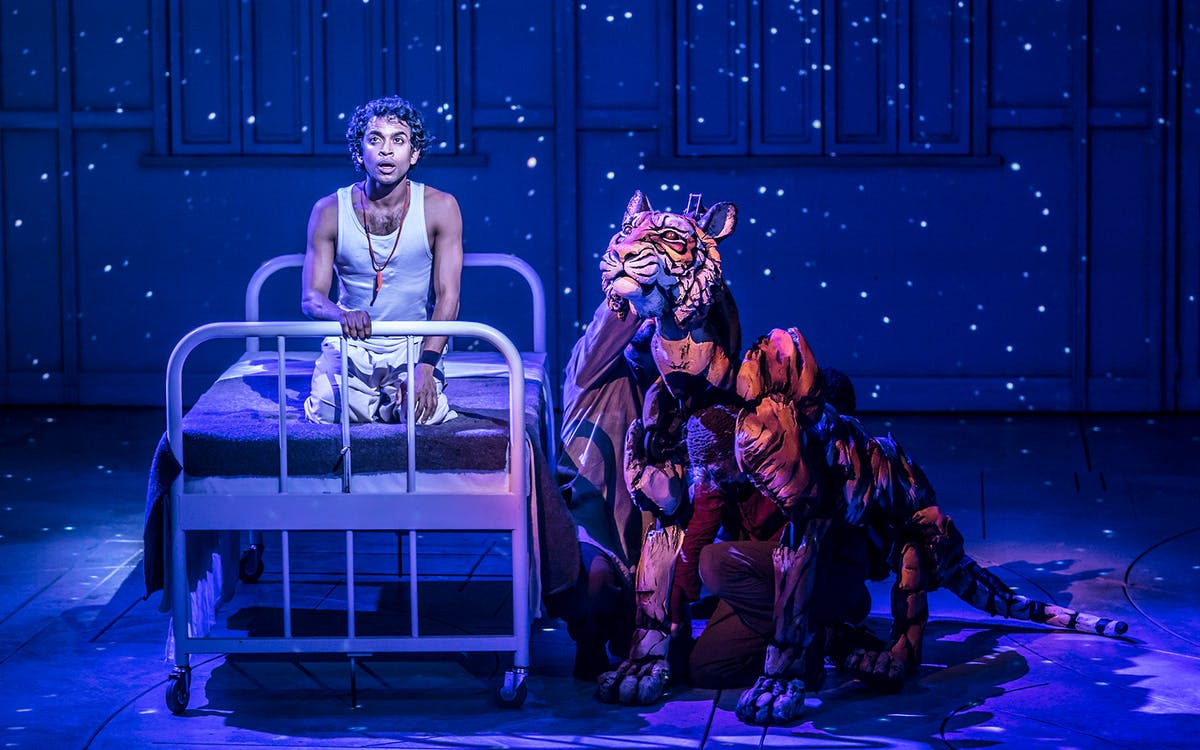 Use promo code and save £10 on Life of Pi London tickets.

Based on the novel by
Yann Martel

Looking for discounts on Life of Pi London tickets?

Have a look at the real-time seat availability and prices of different sections for Life of Pi. In the interactive seat-map, select the date that you would like to watch the show and check out the seats available for that day. You can filter the seats as per your desired price range and purchase tickets directly.

Use promo code WE10 and save £10 on Life of Pi London tickets.

Based on one of the most loved works of fiction, Life of Pi has won the Man Booker Prize after selling fifteen million copies worldwide. A feature film made on the book in 2012 with the same name was nominated for three Golden Globe awards and eleven Academy Awards, out of which it won four. The play made its mark in West End in 2018, with its debut at Sheffield Theatre and fetched extraordinary ratings from both critics as well as the audience. A one of its kind show, Life of Pi promises a larger-than-life experience with human-sized puppets as a part of its storyline.

“Life of Pi turns out to be a worthy successor to ‘War Horse’, with its exquisite stage-adaptation and fantastical tale of survival.”
– The Telegraph UK

“Puppetry, design and direction, and a great human lead make this adaptation of Yann Martel’s book unmissable. It is a triumph of transformative stagecraft.”
– The Guardian

Apart from getting tickets for Life of Pi online, there are other ways to obtain West End tickets for cheap, such as:

The website displays availability of tickets for the current day, along with the following two days. Life of Pi TKTS tickets are currently unavailable.

Q: Is there a possibility that I will get partial view seating if I purchase discounted Life of Pi London tickets?
A: When booking with Headout, you will get to select your specific seats, thus, ensuring you do not get stuck with partial view. However, if you opt to try and win lottery tickets, or purchase day seats, your seats will be allocated at the discretion of the Box Office, which can potentially mean partial view seating or split seats.