Come From Away Tickets On Sale Now

‘Come From Away’ is a deeply moving and touching story of human kindness, heroic hospitality and basic humanity in the face of perilous times. The 9/11 terrorist attacks shocked not only America but the entire world and left people scared, uncertain and full of disbelief. During these difficult times, the people of Gander managed to muster up the courage and valour to welcome 7000 strangers into their town and homes. Cultures clashed, tension and apprehension were in the air and mistrust was at its peak, but in the end compassion, empathy and kind-heartedness prevailed. This musical beautifully captures humanity and celebrates the indomitable human spirit. Despite the subtle differences in the way we look, where we come from or the languages we speak in, at the end of the day we all belong to one, big global family.

The show opened on Broadway in March 2017 and from its very first show has been a raging success. Since Come From Away musical London hasn’t performed on West End theatres since 2019, this is the chance for all ardent West End fans to witness this popular show.

Also, here’s a handy link to the seat availability and real time prices for different seats/dates for Come From Away musical London on Headout.

‘Come From Away’ beautifully recounts the true story of the people of Gander, Newfoundland and how they welcomed 7000 stranded travellers from all over the world, in the wake of the September 11 terrorist attacks. In the week following the attacks, the US Government closed off US airspaces, forcing 38 international aircrafts to change their routes and land unexpectedly at Gander in Newfoundland, a small town with a minuscule population. The Gander townspeople, despite being afraid and anxious themselves, put their inhibitions aside and welcomed the passengers, who were terrified themselves and made them feel safe and comfortable.

Come From Away musical shows the hospitality, benevolence and kindness of the people of Gander and paints a beautiful picture of how unity in the face of adversity always triumphs. As one writer beautifully put it - “On 9/11, the world stopped. On 9/12, their stories moved us all.” 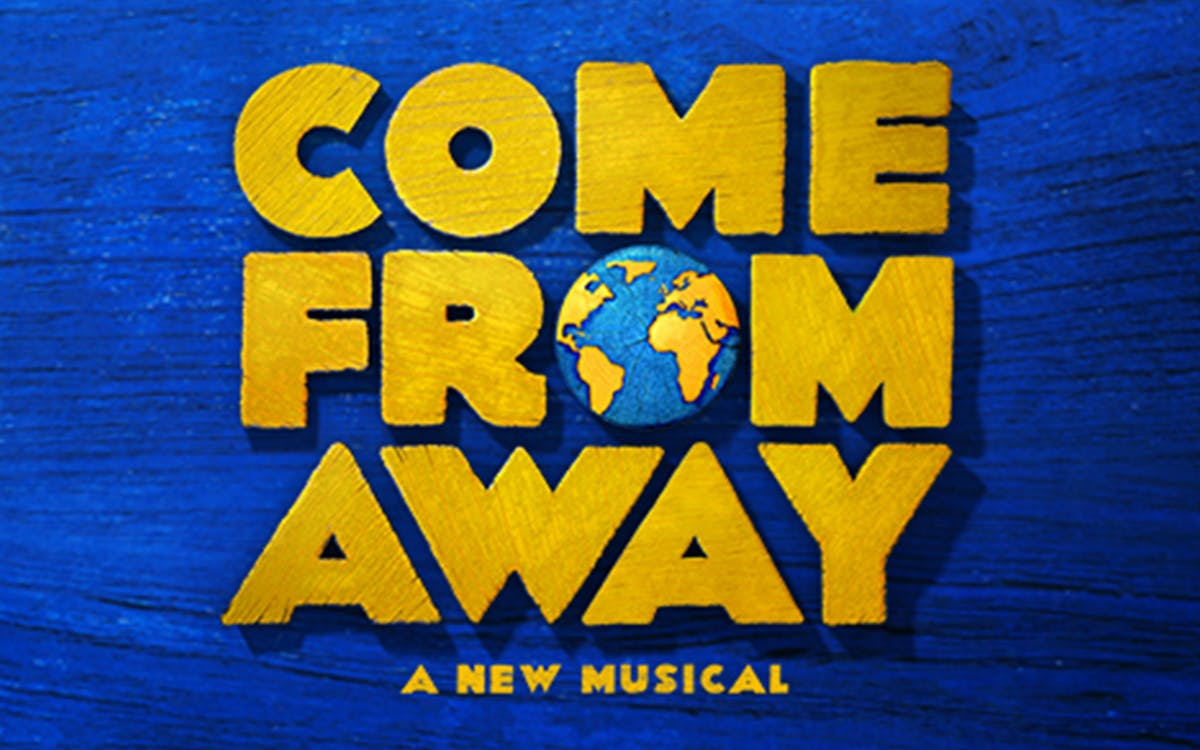 Leading Roles
Rachel Tucker as Beverley, Annette and others
Nathanael Campbell as Bob and others
Clive Carter as Claude and others

Duration
1 hour and 40 mins, with no intermission

Seating
The Phoenix Theatre has a seating capacity of 1012.

As mentioned earlier, this musical, since its very first show has been a huge hit and has sat well with both critics and the general public. ‘Come From Away’ musical London has been nominated for an astounding 7 Tony Awards in the categories of ‘Best Musical’, ‘Best Book of a Musical’, ‘Best Original Score’ and ‘Best Choreography’. The musical has also been nominated for a number of Drama Desk Awards, winning the prestigious award in the categories of ‘Outstanding Musical’ and ‘Outstanding Book of a Musical’.

It has also won the Outer Critics Circle Award for ‘Outstanding Broadway Musical’. In the 2018 Grammy Awards, the musical was nominated for ‘Best Musical Theater Album’. All these awards and accolades imply one thing - you simply have to watch this show!

“Try, if you must, to resist the gale of good will that blows out of "Come From Away," the big bearhug of a musical that opened on Sunday night at the Gerald Schoenfeld Theater. But even the most stalwart cynics may have trouble staying dry-eyed during this portrait of heroic hospitality under extraordinary pressure...this Canadian-born production, written by Irene Sankoff and David Hein and directed by Christopher Ashley, is as honorable in its intentions as it is forthright in its sentimentality.”
– The New York Times

“As long as Come From Away is playing on Broadway, I will recommend it to everyone. Everyone.”
– Broadway World

Book Come From Away London tickets and save £10 on your first booking. Use promo code WE10

Come From Away Musical London Tickets

Looking out for discount on Come From Away Musical London tickets !

Have a look at the real-time seat availability and prices of different sections for Come From Away London. In the interactive seat-map, select the date that you would like to watch the show and check out the seats available for that day. You can filter the seats as per your desired price range and purchase tickets directly.

Phoenix Theatre Seating Plan will help you find the best seats for Come From Away London.

Use promo code WE10 and save £10 on Come From Away London tickets.

Phoenix Theatre London, located at Charing Cross Road, first opened its doors to the public in 1930, because of which it is considered to be one of the newer theaters in West End. Over the years, it has been home to numerous shows and musicals, the latest of which is Come From Away musical, all set to reopen on 21 June 2021.

Apart from getting tickets for Come From Away musical London online, there are other ways to obtain West End tickets for cheap, such as:

In this guide, we help you find the best way to obtain The Tiger Who Came To Tea tickets at discounted rates.

Come From Away London TKTS

Come From Away TKTS tickets will be available once the show premieres.

Come From Away London Lottery

Come From Away London Day Tickets

Day Seats are discounted tickets that are available for purchase, and are to be used, on the same day at the theatre. Please note that the availability of tickets is based on the discretion of the Phoenix Theatre Box Office, and may not be available for all shows.

Day Seats at Phoenix Theatre are currently unavailable for purchase. They will be made available once the show opens.

Where is Come From Away musical playing in London?

Come From Away musical is playing at the Phoenix Theatre, London.

How many people can Phoenix Theatre, London accommodate?

Phoenix Theatre, London can accommodate up to 1,012 guests.

What is Come From Away the musical about?

‘Come From Away’ beautifully recounts the true story of the people of Gander, Newfoundland and how they welcomed 7000 stranded travellers from all over the world, in the wake of the September 11 terrorist attacks.

What is the duration of Come From Away the musical?

Come From Away musical runs for 1 hours and 30 minutes with no interval.

Who can watch Come From Away the Musical?

How can I reach Phoenix Theatre, London?

You can reach Phoenix Theatre, London via cab, bus, or tube.

Does Come From Away have accessible tickets?

Yes. Since Phoenix Theatre welcomes disabled guests and strives to make the show accessible for everyone, viewers can purchase accessible tickets for Come From Away.

How much does the Come From Away ticket cost?

While the ticket price varies depending on your seat selection, you can watch Come From Away for as low as £15.90.

Are there cheaper tickets for Come From Away available?

Yes. Depending on the seat of your choice, you can find cheaper tickets for Come From Away.

Is there a way to purchase The Tiger Who Came To Tea TKTS tickets online, instead of waiting in line at the TKTS booths?

What time should I arrive at Phoenix Theatre?

Is there a possibility that I will get partial view seating if I purchase discounted The Tiger Who Came To Tea London tickets?