Get Discounts On Beetlejuice Broadway Tickets!

Things to do in New York Broadway Broadway Show Tickets Get Discounts On Beetlejuice Broadway Tickets!

The eccentric and maniacal ghost ‘Beetlejuice’ is visiting Broadway in 2019! 30 years after the movie Beetlejuice released, it continues to be a cult classic and established Tim Burton’s career as a maker of horror and dark movies like Edward Scissorhands and Corpse Bride. Inspired by the film, the musical brings the scares and laughs of Beetlejuice to the stage. The kooky storyline is peppered with irreverent comedy and funky music that will have you singing along with mercurial Lydia and the high-on-life-demon Betelgeuse! A perfect watch for the family, Beetlejuice is a memorable blast from the past!

The Beetlejuice musical is based on the book by Anthony King and Scott Brown, with music and lyrics by Eddie Perfect, and directed by Alex Timbers. Alex Brightman plays the titular role of Beetlejuice who was earlier seen in the School of Rock musical as Dewey. He is supported by a cast which includes Kerry Butler and Rob McClure as Barbara and Adam, and Lydia as the moody daughter. David Korins designs the surreal sets, with spooky sound effects by designer Peter Hylenski. The show runs for 2 hours 25 minutes with an intermission.

Adam and Barbara Maitland are a young couple who die in a road accident but find themselves in their home turned into ghosts, and armed with a book ‘Handbook for the Recently Deceased.’ If that’s not all, in a tragic turn of events, the couple is stuck in an underworld bureaucracy and are told they have to be confined to their home for the next 15 years! To make matters worse, their house is now occupied by the Deetz family, including their teenage daughter Lydia, who wishes she might as well be dead.

The Maitlands try every way to spook the Deetz family, but it falls to no avail. This is where they seek the services of the crazy rogue-ghost Betelgeuse who has a notorious reputation. Instead of just scaring them away from the house, he has plans of killing the Deetz, but that’s not what the Maitlands want! Watch the Broadway debut of this cult classic and find out if Beetlejuice gets his way and if the Maitlands get the home to themselves.

Duration
2 hours, 30 minutes including one intermission.

Based on the book by
Anthony King & Scott Brown

Seating
The Winter Garden Theatre has a seating capacity of 1,526. 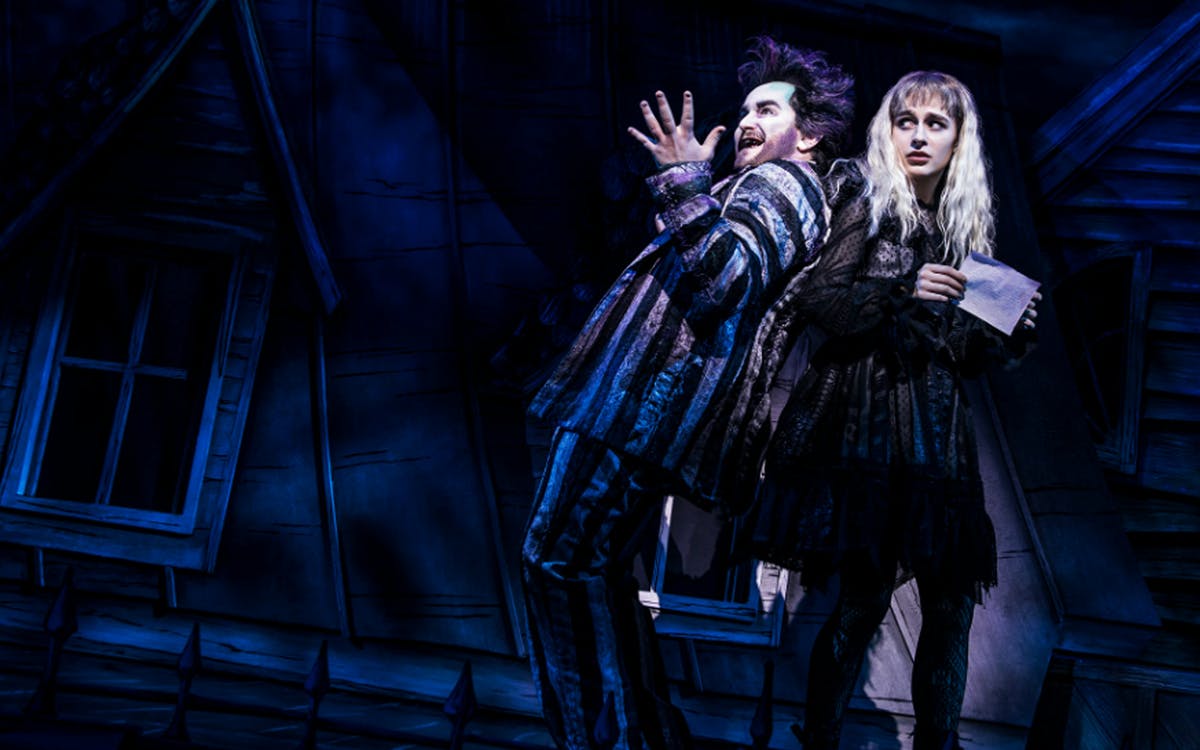 Looking out for Beetlejuice Broadway tickets?

Have a look at the real-time seat availability and prices of different sections for Beetlejuice. In the interactive seat-map, select the date that you would like to watch the show and check out the seats available for that day. You can filter the seats as per your desired price range and purchase tickets directly.

Use promo code and enjoy discounts on Beetlejuice Broadway tickets.

Beetlejuice the musical premiered at the National Theatre in Washington in 2018 and will make its Broadway debut at the Winter Garden Theatre from 25th April, 2019.

“One of the show’s most significant assets is its spectacular set, costume, and lighting design.”
- Theatre Nerds

Note: The reviews are of an earlier edition of the show.

For those looking to book discounted Beetlejuice Broadway tickets online, platforms like TodayTix and Headout are your best bet, as they source tickets directly from the box office and scour the internet for any discount codes available for these shows. Any price advantages are then passed on ensuring that you are paying the lowest prices.