4.6
12 Ratings
Instant Confirmation
Show tickets on your phone
2 hrs 30 mins
Best Safety Standards
This experience has been verified to follow best safety standards in compliance with local regulations and WHO
Safety Details

Embark on a magical Harry Potter walking tour of London and discover all the major sites and locations that played a part in the Harry Potter Universe - from Diagon Alley, Gringott’s Bank, and Platform 9 ¾ to film shooting locations such as Millenium Bridge, Winchester Palace 900-year-old Clink Prison, Shakespeare’s Globe and more.

Harry Potter is easily one of the most defining pieces of literature produced in the last century. Not only have the books embedded themselves into the minds of an entire generation, the movies too have been equally popular. On this free walking tour, your guide will lead you to iconic filming locations across London as well as famous sets where parts of Diagon Alley and Gringott's Bank, to name a few, were shot.

The tour begins at Palace Theatre where your guide will be waiting for you under the huge "Harry Potter" sign. Once you meet up with your group, the guide will sort you into your respective Hogwarts House before you embark on your magical walk through London.

Once the sorting is complete, you will make your way to the many different locations on your itinerary, beginning at Diagon Alley. Your expert guide will lead the group down the real Diagon Alley where Harry bought his first wand before going to school. After the eerily beautiful street, you will visit the entrance to the secret wizarding inn - The Leaky Cauldron.

Now that you've left the muggle world behind, you will be guided to the Millenium Bridge - the bridge destroyed by the Death Eaters in “Harry Potter and the Half-Blood Prince". All this while, your guide will help you with fascinating stories and trivia from the Harry Potter universe.

Among other iconic locations from the movie, you will also be visiting King’s Cross station, home of Platform 9 ¾. Here, you can commemorate your visit with a photograph with the disappearing trolley - the perfect souvenir for wizarding folk at Platform 9¾!

Apart from these, you'll also be visiting famous locations that inspired J.K. Rowling such as the 900-year-old Clink Prison, Sherlock Holmes' Pub, Trafalgar Square, Knockturn Alley, the world’s smallest police station, Daniel Radcliffe's School, and many more! This tour is every Potterhead's dream.

This 2.5 hours guided tour of London is available at 1:00 PM on all 7 days of the week. Please reach 10 minutes before the scheduled start time at the conveniently located meeting point (more details to follow) to meet your guide. The tour ends at Kings Cross Station (Platform 9 3/4).

The meeting point is situated underneath the huge Harry Potter sign outside the Palace Theatre. Your tour guide will be waiting under the sign for you. Palace Theatre is situated on 113 Shaftesbury Ave in London's Soho district.

You may opt out of the tour anytime. Just let us know and we'll make sure our guides are well informed.

Your mobile voucher will be sent to your email instantly. You can display this voucher to your guide at the designated meeting point - under the huge Harry Potter sign at Palace Theatre.

Your tour guide will be waiting under the sign for you. Palace Theatre is situated on 113 Shaftesbury Ave in London's Soho district. 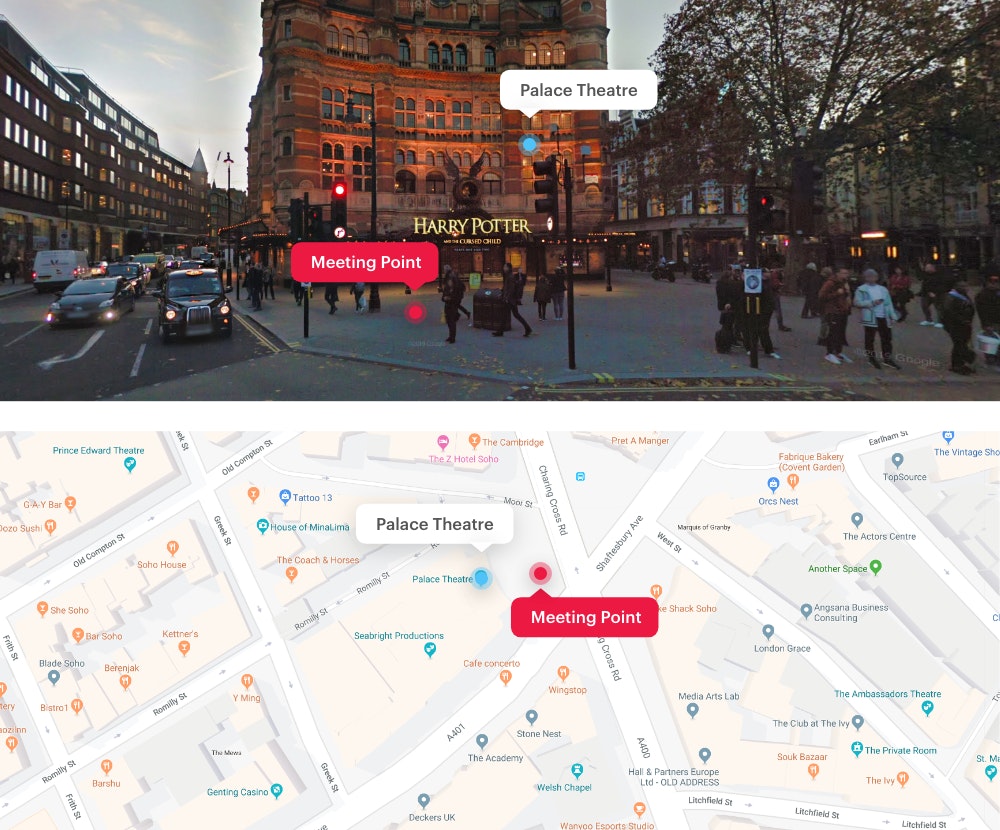