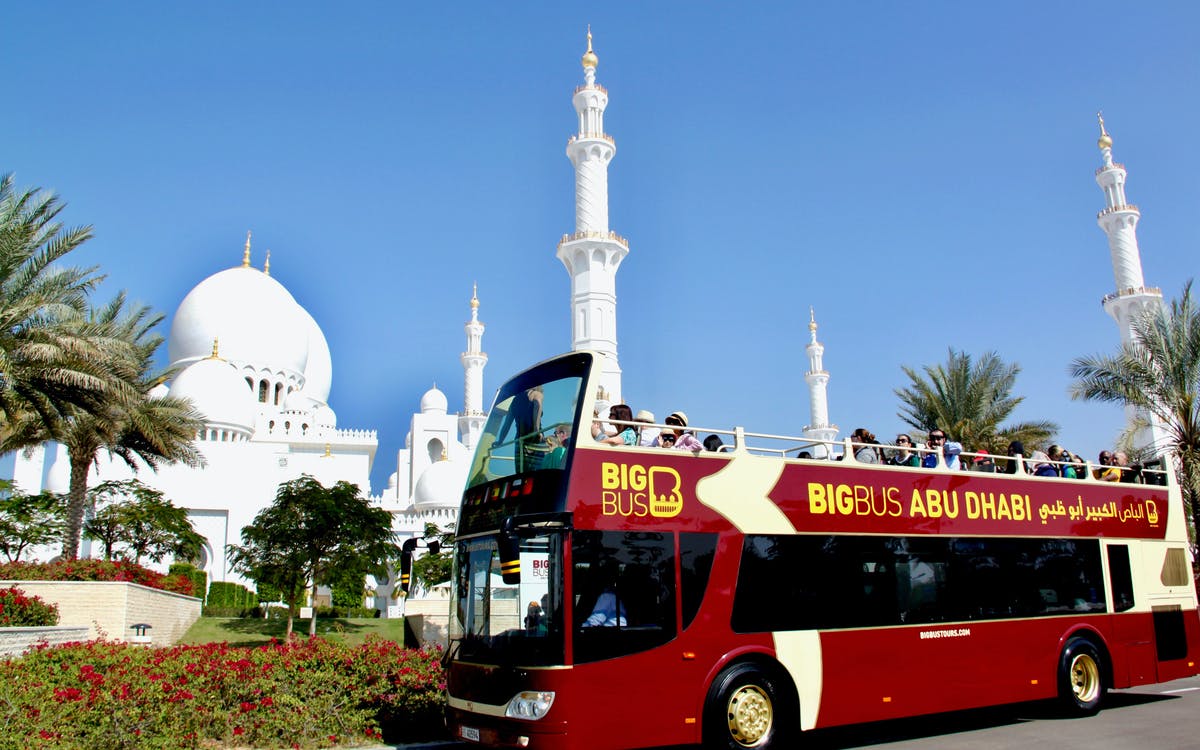 Explore the city of Abu Dhabi with a 2-day hop-on, hop-off bus tour. Sit back and relax in your luxurious bus as you travel around the capital city of the UAE and witness some of its most marvelous buildings such as the Sheikh Zayed Mosque and the Emirates Palace Hotel! Get off at any stop and explore the attraction before getting on another bus and continuing your tour of the city!

With the perfect blend of tradition and modern culture and engineering, Abu Dhabi is one of those rare gems that has grown to be a tourist’s paradise. The city has taken progress into its own hands and is spearheading a massive change in the way people around the world perceive the Middle East.

The city is home to grand buildings and mosques which showcase the power and wealth of the rulers. Modern engineering marvels also dot the city skyline, making Abu Dhabi an incredible confluence of ideas and cultures. Touring the city over two days with the Premium Ticket gives you an opportunity to thoroughly immerse yourself in the local culture. Visiting all the attractions inside the city on the first day and heading to Yas Island on the second day would be a great way to comprehensively explore the city.

The red route has about 18 stops and you can explore the whole city, including all of the popular places such as the Emirates Palace, the Sheikh Zayed Grand Mosque, the Sheikh Zayed Centre, and the Etihad centre on this route. With the premium ticket, you also get entry to ‘observation deck 300’ at the Etihad towers from which you can enjoy a sweeping view of the city’s breathtaking skyline.

At the end of your tour, you will get a complimentary Arabian Dhow Cruise, a traditional boat ride across the Corniche with an irresistible view of the city.

This tour offers one of the most pleasant experiences of Abu Dhabi as all the buses are air-conditioned. Feel free to hop-on or hop-off at any stop you like or even switch routes. With the Premium ticket you could also choose the Yas Island route. This route covers major attractions on the reclaimed tourism-exclusive island including attractions such as the Yas Hotel, Waterfront, Mall, and the Yas Marina Circuit. There is also a stop at Ferrari World, the first Ferrari-branded theme park that boasts of the world’s fastest roller-coaster as well as the world’s largest space frame structure. With so much to experience in Abu Dhabi, the Hop-on Hop-off Premium Ticket is an excellent way to go around the city and experience its wonders.

The schedule for the tour is as follows:

The tour duration varies depending on your selected route. The frequency of buses is every 30 minutes.

Hop off at stop 6 to join the Yas Island Drive Green Route tour.

The schedule for this route is as follows:

The tour duration varies depending on your selected route. The frequency of buses is every 90 minutes.

The tour is wheelchair accessible.

You will receive your mobile voucher in your email shortly. Please display this on your mobile device along with a valid photo ID either in the bus or to any staff member at the stop. A receipt will be given saying that you can access the Hop-On, Hop-Off tour at any stop/bus on that day. You may start your tour from any of the stops on the route.

The tickets can be used on any day within 6 months of the date of purchase.